KAMPALA/KIGALI – The Uganda government has deported 32 Rwandans, accusing them of illegally entering the country.

In a September 12 statement by Mr Marcellino Bwesigye, the Acting Commissioner Legal and Inspection Services, in the Ministry of Internal Affairs, the deportees were identified by the Chieftaincy of Military Intelligence (CMI).

They were deported via Mirama Hills Border in Ntungamo District.

It remains to be seen how Kigali will interpret the action given that the two countries recently signed a memorandum of understanding to diffuse tensions.

An ad hoc commission set up by Uganda and Rwanda to implement the Memorandum of Understanding signed by Presidents Museveni and Kagame in Angola last month to end the tension between the two countries will hold its first meeting in Kigali on Monday.

“The meeting of the ad hoc commission for the implementation of the MoU will be held in Kigali, Rwanda on Monday 16th September 2019,” the statement said.

On the 21st August 2019, Presidents Kagame and Museveni signed the MoU in Luanda, witnessed by the Angolan president Joao Lourenco in an effort to normalise relations between the two countries. 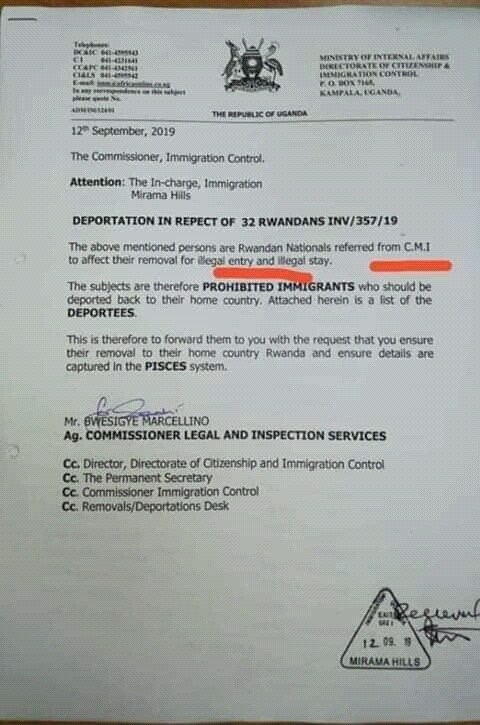 The key issues agreed upon during the talks is the reopening of the Rwanda border which the Kigali government closed in February at the height of the tension between the two countries.

Kigali accuses Kampala of among others supporting rebel groups to destabilize Rwanda, which claims Uganda denies.

Rwanda had also advised citizens against traveling to Uganda over alleged harassment by Uganda’s intelligence agencies but state minister for East Community Affairs, Mr Olivier Nduhungirehe said this issue will also be discussed during the Monday meeting.

The Permanent Secretary of Foreign Affairs, Mr Patrick Mugoya said the Monday meeting will set the pace and the agenda of the ad hoc commission.

“I can’t tell you the details because the meeting will decide on how to proceed,” he said.