KAMPALA —Jordan Ssebuliba, the disgraced adopted son of businessman Mohan Kiwanuka has made an application to court demanding that he is made heir of his father.

Mohan Kiwanuka, the founder of Oscar Industries is still alive and healthy.

“It is just and equitable that the court adjudges Mr Mohan Kiwuka as a person of unsound mind so that his estate can be placed under proper management and that I be appointed Manager for the purpose,” Ssebuliba submitted to court in his application affidavit witnessed by Odogon Fabian, a Commissioner of Oaths.

BKA Advocates represents Ssebuliba, a lawyer himself, in the case where he wants to become heir of his adopted father when his father is still alive.

This is the first such a case in Uganda where an adopted child files a case in court to become heir of a father who is still alive.

“We have never witnessed such a case before where a child biological or not asks court to make him heir of his father when his father is alive. In Buganda, we have well laid out processes that have been in existence for nearly 1,000 years of how children become heirs,” says John Nsereko, an elder from the Kkobe Clan, Mohan Kiwanuka’s clan.

“We follow the will of the father when he is deceased. Where he has not left a will, it is the daughters that elect the heir. But where a child demands to be heir of a father who is alive and well is something we have never heard of. This is a first one. I urge the Kabaka and the Katikkiro and all clan leaders and elders to tell the youth to desist from such demands that can put our heritage in disrepute,” Mzee Nsereko added.

Jordan Ssebuliba, a former signatory for company secretary in Mohan Kiwanuka’s businesses took his father to court claiming he was a lunatic who should not run his businesses. Ssebuliba asked court to turn Mohan’s businesses to him and slapped caveats on all assets that belong to the businessman. Mohan Kiwamuka owns a significant chunk of real estate in Kampala’s leafy suburbs. 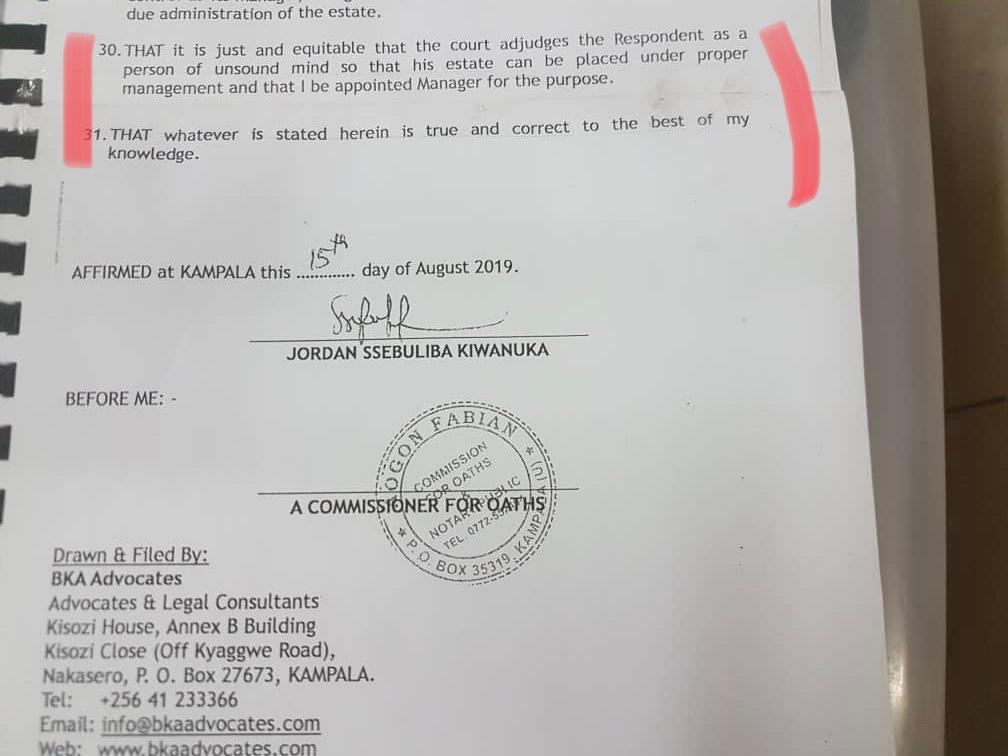 The problems between Ssebuliba and his adopted father started when Ssebuliba tried to sell Oscar Industries against the wishes of the owner. Mohan Kiwanuka responded by not renewing contracts that had made him representative of the company secretary and asked him to vacate properties Ssebuliba was occupying without remitting rent and any proceeds.

Ssebuliba is not a shareholder, director or employee of any of Mohan Kiwanuka’s businesses. His right to the assets are as high as mine, the writer of this article.

Ssebuliba has been occupying properties on Golf Course Road in Kololo, which he had turned into a venue for high profile weddings and events. For 10 years, Ssebuliba paid no rent nor gave any proceeds to Visa Investments, which owns the property. 7-Trees makes Shs600m annually from parties. He also occupied a property on Akibua Road in Nakasero and another in Bwerenga in Entebbe.

Ssebuliba who claims that his father is too sick to run his empire and should be made heir bases his claims on an alleged report made in 2017 yet until two months ago, Ssebuliba was making deals with his father.

“Less than a month ago, Ssebuliba wrote to his father demanding compensation for planting trees and building a toilet at 7-Trees. He wanted Shs1 billion. Why was he negotiating with a person who is too sick to manage his properties?” wondered a law professor at Makerere University who refused to be named.

Mohan Kiwanuka told Bukedde TV in a recent interview that Ssebuliba wasn’t actually his biological son. “His mother had an affair with her boss which resulted into a pregnancy that led to Ssebuliba’s birth. I raised him as my own child because such cases were common in Buganda. His mother and indeed Ssebuliba himself have known this for many years,” the soft spoken Mohan Kiwanuka who exhibited no signs of Alzheimer’s disease said. Ssebuliba’s father is said to hail from western Uganda.

The property mogul is said to have told his associates that he was a very lucky man Ssebuliba demanded to be heir when he was still alive. “I am very happy that these things are happening when I am alive. Imagine how Ssebuliba would behave if I was dead. I am extremely happy to witness this in my lifetime and when I am still capable of solving the issue,” Mohan Kiwanuka reportedly told his associates.