KAMPALA – Government has gazetted the red beret as part of the uniform of the Uganda Peoples Defence Forces (UPDF).

The red beret has been popularly worn by the People Power pressure group headed by the Kyadondo East Legislator Robert Kyagulanyi aka Bobi Wine.

The Minister of Defence and Veteran Affairs, Adolf Mwesigye noted in the gazette dated September 18, 2019, that the use of army uniform which includes the red beret is restricted to only military police under Section 160 of the UPDF Act 2005.

“The public is hereby informed that the marks, accessories, insignia, decoration and uniforms specified in the schedule to this notice are property of the state or classified stores and anyone found in unlawful possession, selling or dealing in them shall be prosecuted under the Uganda Peoples Defence Forces (UPDF) Act of 2005,” reads an excerpt.

According to the gazette, members of the public and the UPDF shall wear military uniform only when granted authority by a competent military authority.

“Members of the Uganda Peoples Defence Forces shall wear or use the marks, accessories, insignia, decorations or uniforms in the schedule to this notice in accordance with the UPDF’s standing orders issued by the Chief of Defence Forces,” reads the gazette in part.

The gazette further stipulates that the public is prohibited from selling or exposing to sale or use the uniform of the defence forces.

“It is prohibited to manufacture, sell, offer or expose for sale, wear or use any uniform so nearly resembling the uniform of the Defence Forces and likely to deceive the public,” 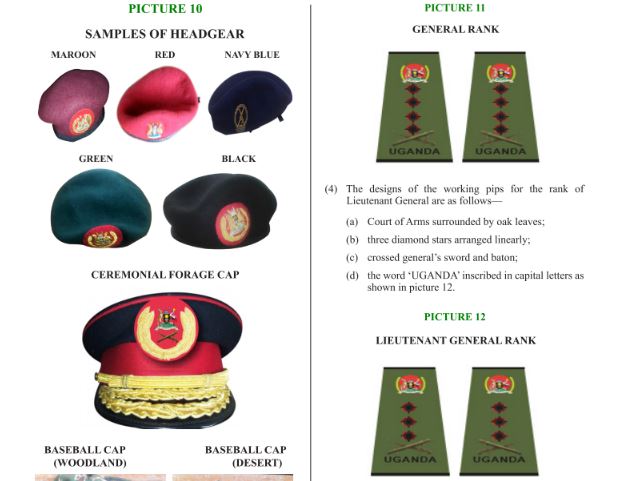 Adding that, “It is prohibited to wear or use any decoration supplied or authorized for use by any member of the defence forces or any decoration so nearly resembling that decoration and likely to deceive the public.”

The UPDF spokesperson, Brig, Richard Karemire confirmed the matter via twitter noting that “The dress code for the UPDF has been gazetted and the action was endorsed by the top organs of the army which also commended the dress committee for concluding the task assigned to it years back. This development is a milestone in the long history of the UPDF,”

He further said the gazette manifests the commitment to define identity and outlook of a professional army as well as adhering to the EAC protocols.

Section 119 (1) of the UPDF Act 2005 stipulates that every person, not otherwise subject to military law, who is found in unlawful possession of (equipment ordinarily being the monopoly of the defence forces and other classified stores as prescribed, is subject to military law and can be tried in military courts as appropriate.

The offence carries a maximum sentence of life imprisonment on conviction.