JINJA — The Ambassador of Japan to Uganda H.E Kameda Kazuaki has on Monday August 26 officially opened a course in Heavy Engineering Equipment operations for UPDF at the Uganda Rapid Deployment Capability Centre(URDCC) in Jinja.

The course is aimed at enhancing UPDF’s capability in operating heavy equipments whenever deployed in any mission around the world. It is a United Nations Triangular Partnership with the Government of Japan and Uganda newly introduced to the UN Peace keeping Operations to close the gap that has always delayed UN deployments while processing contractors to construct critical infrastructure in the area of operation.

Ambassador Kameda in his remarks revealed that this is the first ever Japan military cooperation extended to Uganda with its troops on ground.

The Japanese Army instructors numbering to 22 from the Japanese Engineering and transport Unit will initially train 30 UPDF soldiers for a period of three months before they are handed back to the UPDF leadership for possible deployment into any UN mission across the world.

. “President Yoweri Museveni has overtime appreciated the reliability and efficiency of the Japanese technology and that is why we have found it easy and befitting to support the UPDF through this partnership with UN to promote peace and security around the Globe,” Mr. Kameda.

He says that East Africa and indeed continental Africa has had enormous challenges that has attracted the biggest number of UN missions and therefore it is imperative to have Uganda trained to enable its troops be self reliant whenever they are deployed.

The government of Japan has spent over 70million USD for training and equipment procurement in this regard since the launch of the partnership and is willing to help further.

The opening ceremony was also addressed by the UN Under Secretary Department of Operational Support Mr Atul Khare from New York through video teleconferencing technology. He applauded the government of Uganda for partnering with UN and the Japanese government to implement the first triangular partnership project as well as sacrificing it all for the peace and stability of the world. He specifically commended the country for the contributions and sacrifice in Somalia where the UN is equally actively involved.

At the same function, Uganda’s Defence Adviser to Uganda’s Permanent Mission in New York Maj General Silver Kayemba who represented the Ugandan Minister of Defence and Veteran Affairs and the Chief of Defence Forces thanked the UN and the Japanese government for choosing Uganda to be part of the pioneer states implementing the triangular partnership project. “Thank you UN, thank you Japan for choosing a right partner for practical deployment. UPDF only trains to deploy and we like deploying in challenging operation areas. Be assured, as soon as this team graduates it will be deployed” Gen Kayemba emphasized. 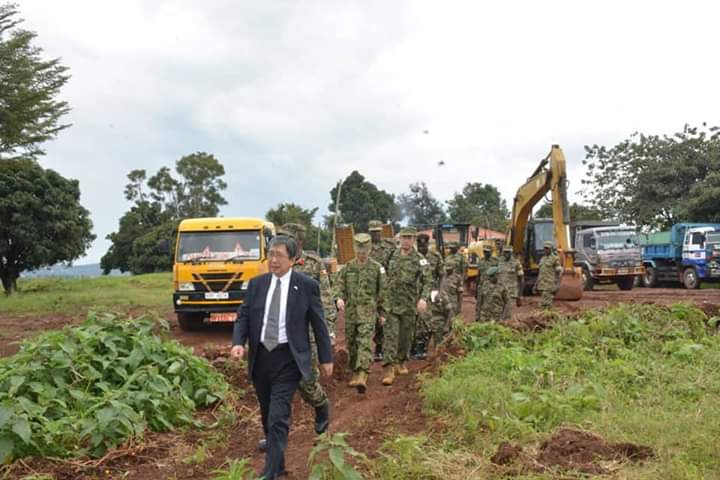 Maj Gen Kayemba also revealed that the project is divided into phases; the training phase, Equipment Acquisition Phase and the deployment phase. He said once these phases are done, UPDF will be able to establish itself very fast into any theater. He assured the Japanese and UN that the UPDF trainees have been carefully selected, vetted and up to observing the UN standards of observing Human Rights and International Humanitarian Law. He cautioned the trainees to be disciplined or else they meet him as a witness in the court martial in case they fall short of discipline.

Maj Gen Silver Kayemba equally announced the commitment of the Uganda government to providing UN One Company of Special Forces, One Infantry Battalion, One Engineering Company and a level II hospital Medical team for any UN deployment around the world with no any Caveat and that their deployment can be renewed between six months to one year.

The Commandant of Uganda Rapid Deployment Capability Centre (URDCC) Brig Peter Omola welcomed UN and the Japanese contingent to the Centre. He expressed hope that the dedicated Japanese training team will do a good job as already exhibited from their timeliness for the time they arrived at the centre.