BUNDIBUGYO – President Yoweri Museveni has, on August 4, urged Ugandans to wake up and kick out poverty from their homes by embracing a money economy that suits modern-day lifestyles.

He made these remarks while he was concluding a three-month countrywide sensitisation campaign of sensitizing wananchi on wealth and job creation with a public rally in Bundibugyo District, Kasubba Sub-County Headquarters.

According to the President, his aim was fighting for the poor who for long have lived in economic darkness because of lack of leaders to mobilise them to wake up and work to banish poverty.

“The NRM struggled to usher peace in the country. Peace ignited infrastructure development. The remaining task is wealth creation mobilisation at the household level. A person with a reasonable piece of land is able to handle any agricultural practice. I am now struggling to see that a person with a 4-acre or less piece of land utilises it to realise high productivity to accumulate wealth,” he said.

He further applauded them for support for the NRM governance by their overwhelming vote in the 2016 general elections.

“I have come here to thank you for voting well. I commend you people of Bundibungyo for you are focused politically. Your mature and responsible voting has made the area peaceful contrary to the neighbouring DRC,” he added. 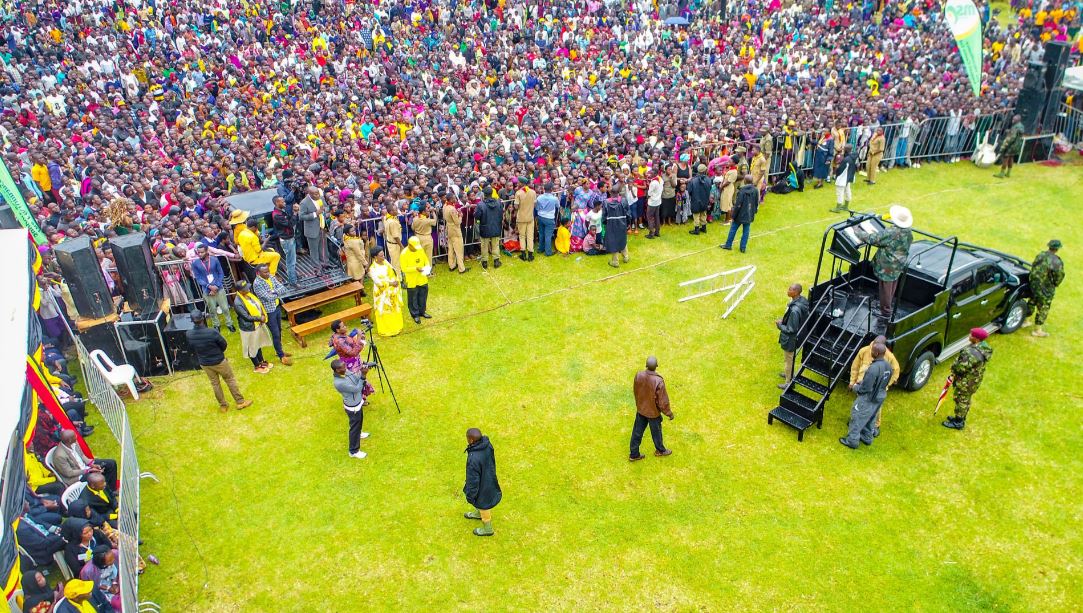 He revealed that the government has formed an annual fund allocation of UGX400 billion for wananchi to boost individual household income adding that the money is embedded in the youth livelihood fund, women fund, OWC and microfinance fund.

“Other extra source of funds the government has identified, he added are under skilling programme, specialised enterprises fund and elected leaders’ fund,” he revealed.

He sternly cautioned those people that will be tempted to squander the funds that they would be apprehended.

President Museveni also warned people on the consumption of apes’ flesh saying it is the root cause of the Ebola outbreak in the area.

“To curb further spread of Ebola, he added, people should avoid handshake till the disease is eradicated,” he said.

In attendance were the Presidency Minister, Hon. Esther Mbayo, Agriculture, Animal Industry and Fisheries Minister, Vincent among other dignitaries.