KAMPALA —Kyadondo East Member of Parliament (MP), Robert Kyagulanyi, popularly known by his stage name – Bobi Wine has on Friday, August 30, condemned the acts of extreme violence unleashed on a one Baker Kasumba by known people for allegedly supporting the ruling NRM party.

The singer-cum politician has urged the authorities to professionally investigate this issue, and if found true, hold those culpable to account.

Police said on Thursday that thugs roughed Kasumba in Kalerwe, got him badly beaten before placing his hands together and hammered two concrete Nails measuring six inches long into his palms.

Kasumba according to Police statement was returning home from town slightly after 10pm.

In the scuffle, he also sustained a cut on the forehead.

The popular budding opposition figure however claimed that these are acts done by the regime to deliberately portray opposition forces as violent so as to respond to them with too much violence — maintaining that violence only leads to more violence and the cycle never ends.

“That is why we emphasize a non-violent struggle to rid our country of dictatorship through People Power! I know that many of our comrades countywide have been arrested, beaten up and assaulted by the authorities for putting on the People Power berets in a very provocative manner,” he said.

He urged the youths to win by rising above the regime’s “shameless schemes.”

The unfortunate thing that has happened to the country, he said is that no one can tell what is true and what is not true and that majority of the citizens cannot even tell whether what comes out of the police force is true or not.

The incident has come a few days ago, after Police released a video which Police spokesperson Fred Enanga claimed depicted moments of the fallen singer Ziggy Wyne.

However, many who watched it have could not help but to reject it.

Bobi Wine said its now hard at this point to confirm the account of alleged nailing of Mr. Kasumba.

Meanwhile, Ms. Justin Kasule Lumumba, the NRM Secretary General has promised that the party will foot the medical bills for their supporter.

She has also called on security agencies to jointly speed up the investigations and bring the suspects to answer their charges.

She has further called on Ugandans to desist from torture and any other cruel, inhuman or degrading acts against humanity.

Lumumba says every person has the right to freedom of association which includes the freedom to form or join a political party.

Baker Kasumba is a resident of Kisenyi Zone, Bwaise I Parish in Kawempe North B Sub County.

The party says that Kasumba deals in second hand clothes at Ham Tower in Kampala City. 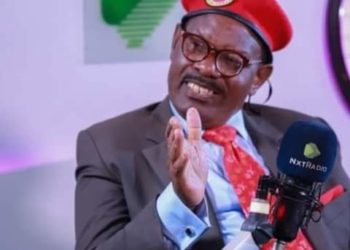