KAMPALA – The Chief Executive Officer of the National Lotteries and Gaming Board, Mr Edgar Agaba, has been interdicted as he battles corruption allegations in court.

On July 4, Mr Agaba, alongside Mr John Patrick Kazoora, the Manager in Charge of Finance Administration, were arraigned before the Anti-Corruption Court in Kampala and charged with embezzlement of Shs710 million in company funds.

And now Finance minister has ordered to vacate office and hand over the necessary files to pave way for investigations.

“I am in receipt of a letter from Uganda Police Force Ref: KMP/CID dated 11. July 2019 informing the Ministry that you were charged with embezzlement and causing financial loss and as such appeared in the Anti-Corruption Court Kampala on 4th July 2019 Vide Court No. CO-0090-2019. In light of the above communication and the fact that the charges levied against you relate to financial impropriety against the Board, it is necessary that you step down as the Chief Executive Officer of National Lotteries and Gaming Board as we await the outcome of the criminal proceedings,” Mr Kasaija’s letter to Mr Agaba dated July 19 reads in part. 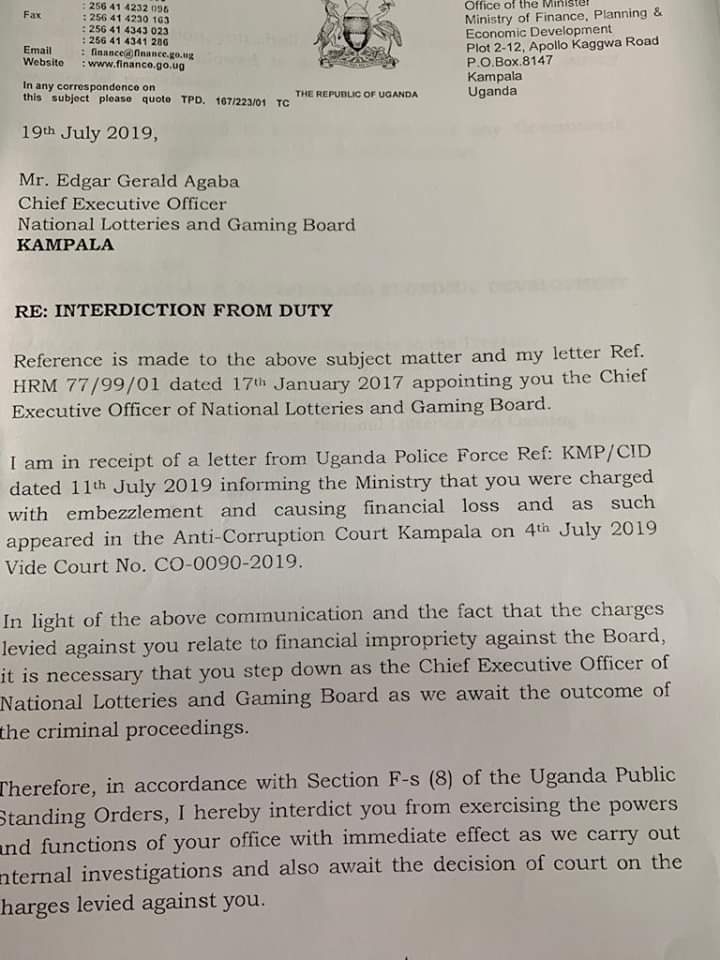 “Therefore, in accordance with Section F-s (8) of the Uganda Public tanding Orders, I hereby interdict you from exercising the powers rid functions of your office with immediate effect as we carry out eternal investigations and also await the decision of court on the charges levied against you,” it adds. 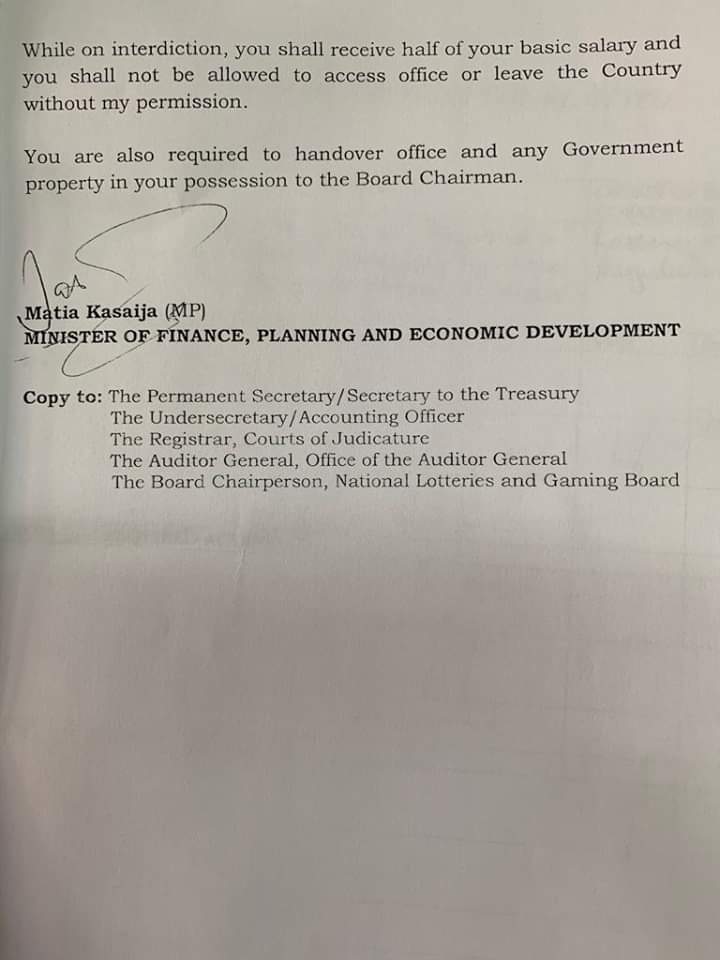 Prosecution alleges that Agaba and Kazoora and others still at large between October 17th, 2018 and February 14th, 2019 at their offices in Kampala stole 710 million shillings.

Prosecution also alleges that the suspects between the same time approved and forwarded requisition documents of 470 million shillings to the Ministry of Finance purporting to be paid for Hotel Services.

They reportedly also caused another loss to the government when they said they requested for 480 million shillings to sensitize Boda Boda riders from Kawempe Division for four days but only did it once and shillings 360 million was stolen.

The suspects have however pleaded not guilty to all the charges and asked to be granted bail.

The Anti-Corruption Chief Magistrate Pamela Lamunu ruled that the sureties were substantial and accordingly granted cash bail of 20 million shillings. The sureties were bonded at 200 million non-cash. The state Prosecutor Abigail Agaba says the investigations are still on-going. The case was adjourned to August 16th, 2019 for mention.