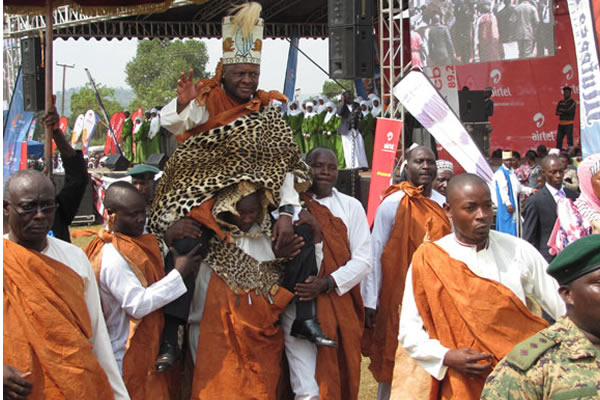 He made these remarks in his speech that was presented by the Kingdom’s Minister Mariam Mayanja Nkalubo on Sunday, July 28,

During a church service led by Rev.Fr Joseph Ssebayigga in Bugonga parish in Entebbe municipality.

“While celebrating the 26th Coronation, let us prioritize matters of health because a healthy person is the one who can revive the glory of the kingdom,” says Minister Mariam Mayanja Nkalubo.

Fr. Ssebayigga said that the King of Buganda is a very important person to the Catholic community since he gave them land which they used to build churches like Bugonga, Kisubi and schools which have helped a lot in educating Ugandan children.

“For the Catholic Church, maybe we wouldn’t be here if it were not the king of Buganda because you know he invited the missionaries to come to Uganda, he is the one who wrote the letter inviting them to come so maybe if it was not the Kabaka of Buganda, we wouldn’t be Catholics” said Fr. Ssebayigga.

Fr. Ssebayigga says, since the Kabaka’s Coronation is going to be held in Busiro County and Bugonga church too, we could not just sit but rather to thank God for keeping His Majesty kabaka Ronald Muwenda Mutebi alive. Christians also contributed UGX 1 million cash given to Minister Mariam Mayanja Nkalubo to help in the preparation of the event.

On behalf of Buganda Kingdom, Mariam Mayanja Nkalubo appreciated Catholics for the good heart exhibited towards supporting the Kingdom.

The Kingdom’s minister also urged them to always take care of their lives through drinking boiled water, brushing their teeth and washing hands after visiting the toilet in order to avoid diseases.

She also urged parents to always support their children in promoting their various talents.

This 26th edition of the King’s coronation is going to be hosted on Wednesday, July 31st in Busiro County at Nkumba University under the theme “Promoting culture and norms through health and education.

23 arrested for ‘congesting’ in house

Police to appeal against Court ruling on POMA