KAMPALA – The embattled Secretary to Judiciary, Kagole Kivumbi has been fired and replaced by Pius Bigirimana who has been the Permanent Secretary, Ministry of Gender, Labour and Social Development in what is believed to be a response to investigations over disappearance of Shs32Bn from the Judiciary coffers.

Mr Kagole’s fate came to light in a leaked letter authored by Secretary to Cabinet, John Mitala in his July 26, 2019 letter to Bigirimana, instructing him to take on the Judiciary with immediate effect.

“The Appointing Authority has directed that you be transferred from the Ministry of Gender, Labour and Social Development to the Judiciary as Secretary to the Judiciary with immediate effect. On receipt of this letter, prepare to handover your office within the existing regulations and report to your new station without delay.”Mitala wrote.

Mr Kagole has been a subject of Parliament investigation through the Public Accounts Committee (PAC) headed by FDC Secretary General, Nandala Mafabi who called on the Criminal Investigations Directorate (CID) to handle the matter. 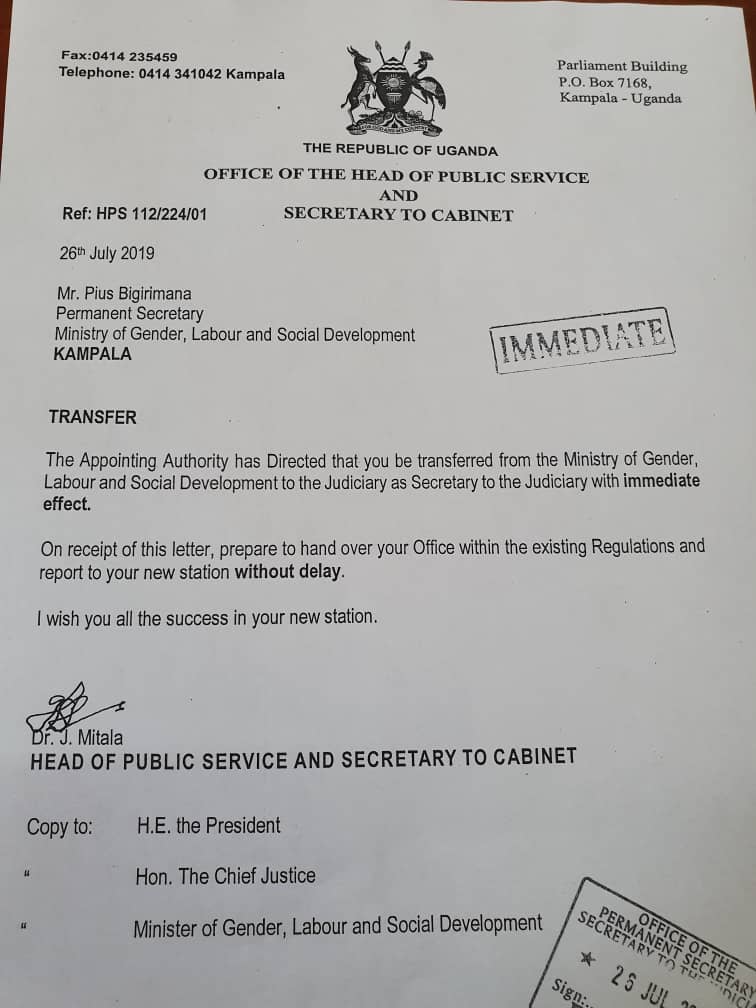 In his July 4, letter, Mafabi requested the judicial accounting officers to provide police officers D/SGT Nathan Tumusiriza and D/AIP Micheal Olwoch with critical information including staff details and personal bank accounts, accountabilities amounting to Shs800M, some staff returned to the Secretary to Judiciary, Kagole Kivumbi that had been given to these staff as transport allowance.

The Committee also asked the Judiciary to provide personal statements regarding the Shs841.6M retained at the end of the 2017/2018 with Mafabi quoted ahead of the CID investigation saying, “Out of the 147 accounts that we have, we are going to identify more things. Not only that, they have dipped hands in bail money and security bonds. I can tell you nobody will lie.”

The Public Accounts Committee is investigating findings into the 2017/2018 Auditor General report that noted that Shs34,076,576,196Bn was incurred on various items yet the description of the expenditure items weren’t consistent with the item coding in the chart of accounts, resulting into mischarge.

John Muwanga, Auditor General said that the Secretary to Judiciary didn’t seek for authority to reallocate the resources and due to the mischarge, the items in the financial statements were misstated to a tune of Shs34Bn something he said undermines the appropriating authority.

Kagole rejected the figure cited by auditors saying the only money mischarged was Shs28,177,025,655Bn with the funds spent on; court operation funds, mediation funds, HIV medical allowances, monitoring and evaluation because the said items have no budgetary allocations. 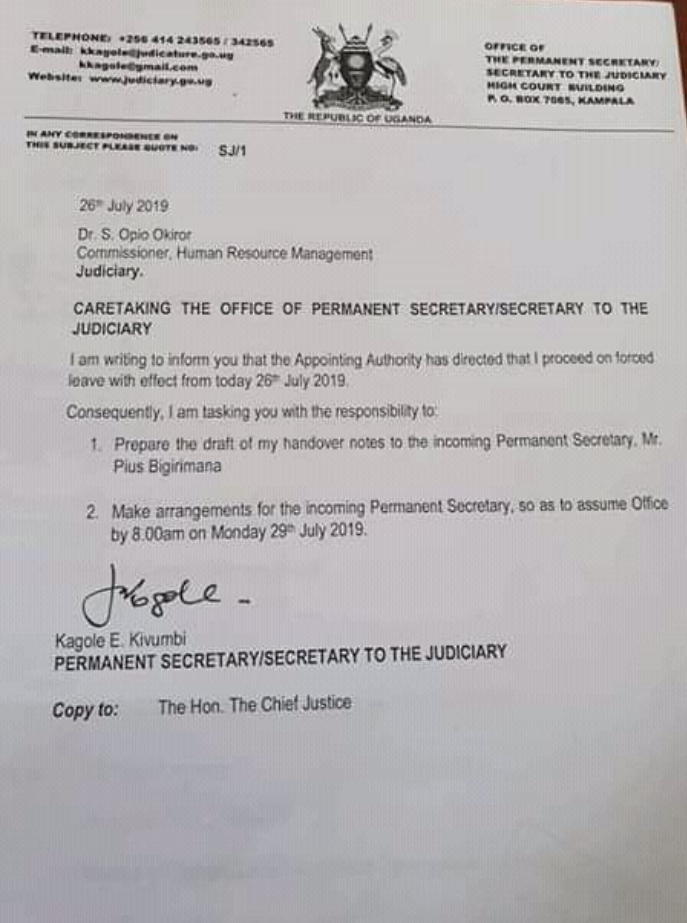 The Committee found out that most of the money mischarged ended up on personal accounts of Judiciary staff citing an example of a cleaner whose account was debited Shs10M with suspicions that some of these accounts were used as scapegoat for big shots to collect money.

“In a day you pay someone Shs65m, then the next day Shs40M and in one week somebody has over Shs100M what kind of activities is someone doing for that kind of money? We asked why pay these people? This isn’t salary or allowance. They are paying Islamic University for somebody’s masters for two years, why do you give that person cash instead of paying the university?” noted Mafabi.

After the discovery, Kagole engaged the Committee in hide and seek games with the Committee and at one point, sending a lawyer to represent him in a committee, contrary to public standing orders.

However, as the storm had calmed on the monkey games, Kagole was further drawn the Parliamentary investigation further unearthed more rot in the Judiciary demanding answers on how the institution spent Shs449,205,029M to construct water borne toilets at the residence of Chief Justice Bart Katureebe and Chief Magistrate Court in Entebbe.

In his audit report, Auditor General, John Muwanga highlighted that Shs7,247,112,408Bn was spent on the procurement of desktop computers, motor cycles, water borne toilets and Microsoft ware yet the items purchased were not among those items listed on the approved procurement plan.

In documents before Parliament, the Judiciary paid Palwan Engineering Works Limited Shs13,103,015M to construct a water borne toilet at the residence of Chief Justice on 28th March 2018 but shockingly, the same water born toilet was constructed by Platinum Engineering Limited at Shs436,102,014M at the Chief Magistrate Court in Entebbe with the money sent to the contractors on 25th October 2017.

Kagole yet again rejected the amount quoted by the audit team arguing that the construction of water born toilets were under the institution’s procurement plan to repair and maintain court buildings at Shs102,833,00M and the two works cost Judiciary Shs57M not figure stated by auditors.

In the same expenditure, Judiciary also paid Shs587,685,00M for ICT Automation supply and delivery of station wagon for the Deputy Chief Justice Owiny Dollo, while the rest went to procuring vehicles and office items for newly appointed justices.