He called the President a thief! Police confirm arrest of self styled city Pastor Kabuleta

KAMPALA – Former New Vision sports Journalist and the Pastor Watchman Ministries, Joseph Kabuleta has been arrested by the police.

Kabuleta was picked up by plain cloth detectives at Drew and Jacs Restaurant in Lugogo ahead of his Friday evening fellowship.

Claire Kagimu, the Administrator of the Watchman Ministries, says they were expecting Kabuleta for the evening fellowship, which climaxes at 7: 00pm but he didn’t show up. 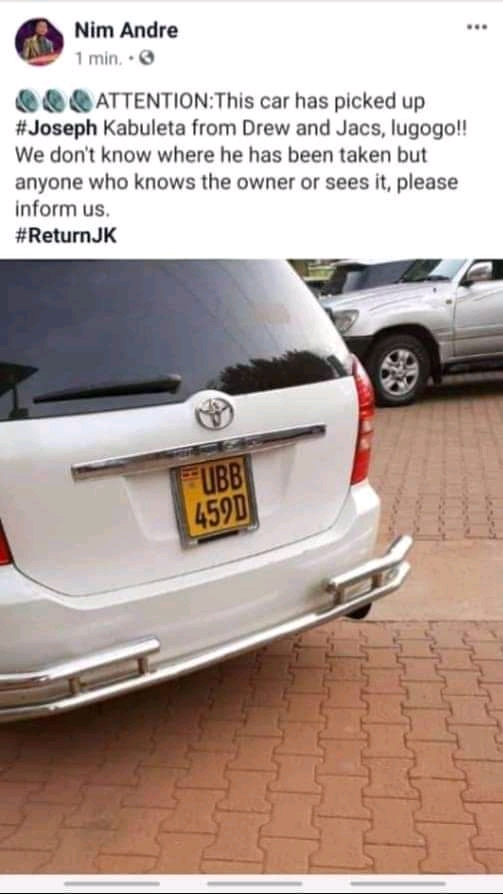 Kagimu told PML Daily that they received information that Kabuleta had been picked up by some people driving in a white Toyota Wish at 7:00pm.

Police spokesperson Fred Enanga confirmed that a team of detectives from the Special Investigations Division has today arrested Joseph Kabuleta, and put him under custody.

Enanga said he has been apprehended because of offensive communication against the person of the President.

According to preliminary information, Enaga said the writer repeatedly posted grossly offensive messages, under “Joseph Kabuleta Weekly Rant Returns,” referring to the Fountain of Honor as “a Gambler, Thief and Liar”.

“Section 25 of the Computer Misuse Act, 2011, criminalizes such acts of communication,” Mr Enanga said adding that any postings of false fabrications will attract punishment in accordance with the laws.

“The public is further advised to think first about what they say on social media. The joint forces will continue using the acquired capabilities to monitor comments on social media and any offenders will be investigated and punished. Investigations into the conduct of Joseph Kabuleta are ongoing and more information will be availed as investigations unfold.”

In his post, Kabuleta noted that it was now clear that President’s Museveni’s son, Major Kainerugaba Muhoozi has started positioning himself a Museveni’s heir. “It started with sporadic appearances at events, a few dreary speeches, and plenty of social media activity but now it’s clear to every discerning eye that The First Son (official title) is crawling out of his hole like a squirrel,” he said.

Adding that, “Even his bevy of paid promoters are becoming bolder in their proclamations; calling him “our next president” in their tweets. Knowing who these people are, and how close they are to the junta, that is more than idle talk.”

He claimed that whatever has been on behind the scenes is about to be unleashed.

“Clearly, whatever has been cooking under the scenes is about to be unleashed. And it has been several years in the making, starting in the mid-90s with a recruitment of young, graduate soldiers who were in effect Muhoozi’s boys,” he wrote.

Ntungamo extension workers on the spot over absenteeism

Ntungamo extension workers on the spot over absenteeism