KAMPALA – IOM Uganda and its implementing partners recently organized a series of public campaigns to raise awareness about human trafficking.

The campaign was supported by the Better Migration Management (BMM) programme, a regional, multi-year, multi-partner programme co-funded by the European Union Trust Fund for Africa (EUTF), and the German Federal Ministry for Economic Cooperation and Development (BMZ). BMM aims to improve migration management in the region, and in particular to address the trafficking and smuggling of migrants within and from the Horn of Africa.

The main events took place in Kampala as well as in the northwestern districts of Yumbe and Moyo. IOM worked in collaboration with the Humanitarian Assistance and Development Services (HADS) and the Uganda Youth Development Link (UYDEL).

In Yumbe town, traffic came to a standstill as students, youths, women groups and boda (motorcycle taxi) operators, led by a brass band, marched with posters and placards, warnings about the lurking danger of trafficking in persons.

Social workers and security leaders then addressed the participants, urging them to resist the allure of unverified promises of ‘big jobs’ abroad or in Uganda’s larger towns.

The main speaker was Hakim B. Viga, the District Internal Security Officer for Yumbe. He said many parents in the district were naively surrendering their children to traffickers believing that the youngsters were being taken for religious education. Viga also encouraged youth to follow regular migration pathways.

“There are many companies which have been licensed by the government to export labour,” Viga said. “But some of our young people go through Kenya and end up in the Middle East without proper documentation. So, if someone comes to you saying ‘I want to take you abroad to work’, first do a very thorough investigation before you accept.”

In the neighbouring district of Moyo, the awareness-raising campaign took place in Morobi village in the Palorinya refugee settlement and was attended by both refugees and members of the host community. The main speaker was the Officer in charge of the main Police station in the district, Shafik Kasujja. He, too, urged the community to critically scrutinize what might appear to be promises of dream jobs abroad. 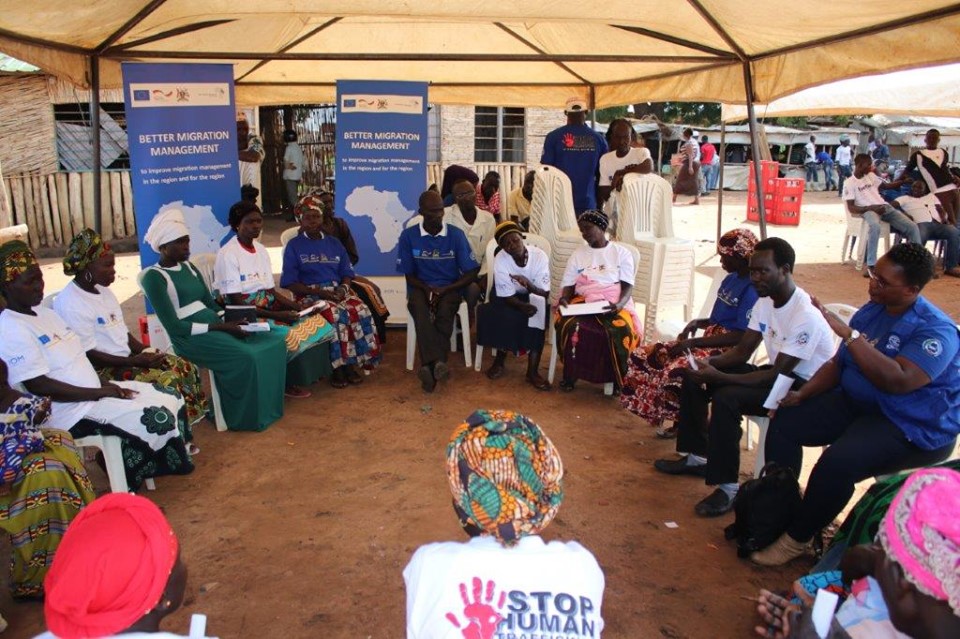 The awareness activities, co-organized by IOM’s implementing partner HADS, included a lively concert, with popular local musicians like Uncle Pato entertaining the crowd of several hundred men, women and children of various ages. The amusement was punctuated by well-received awareness messages from IOM and HADS staff.

To crown the awareness drive, IOM and UYDEL organized Big Splash events in the Kampala slum areas of Katwe and Kawempe.

Pupils from local schools, along with community members, marched around Katwe to raise awareness on human trafficking. Learners from almost 10 primary and secondary schools presented skits, poems, songs and plays on ridding society of trafficking in persons and promoting safe migration.

In Kawempe, music and sports competitions were held against a backdrop of anti-trafficking messages, with competing teams wearing T-shirts customized to the theme of the day.

Joycelynn Karungi, IOM Uganda Counter-Trafficking focal person, thanked the children and the community for taking part in the fight against the scourge, and also in highlighting the message: “Stop Human Trafficking. It Starts with You”.  Karungi urged the audience to internalize and spread the messages embedded within the multi-lingual information and education materials they had received. She also urged the audience to be vigilant and report cases of trafficking, since anyone can be prosecuted under the Prevention of Trafficking in Persons Act, in place since 2009. 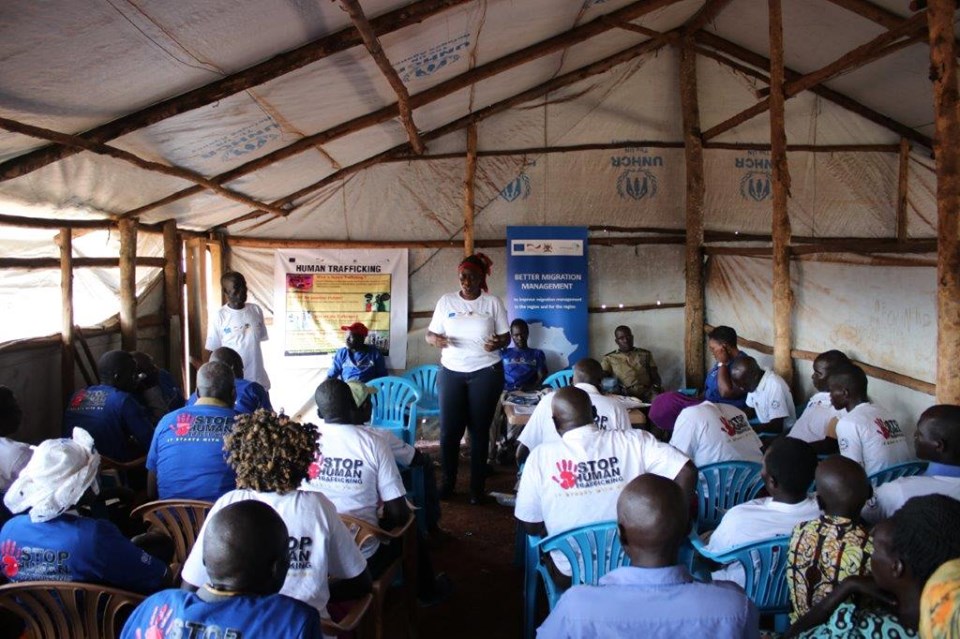 As Esther, a one young girl from Trust Primary Bulenga Ssumbwe, told the audience during her speech: “Together we can kick Human Trafficking out of Uganda.”

In a poem, another pupil, from Merryland Primary School Gayaza, said: “Parents, do not frustrate our dreams by sending us to early marriage or giving us away to traffickers for the benefit of just a dollar that you push into your pockets.”

IOM, the UN Migration Agency, is one of the implementing partners of the Better Migration Management programme alongside the British Council, CIVIPOL, Expertise France, GIZ, Italian Department of Public Security (IDoPS) and the United Nations Office on Drugs and Crime (UNODC).  IOM implements this programme in Djibouti, Ethiopia, Kenya, Somalia, South Sudan, Sudan and Uganda.