You don’t know what you’re playing with! Kagame sends strong warning to neighbours for disturbing peace in Rwanda

BURERE – President Paul Kagame who is on a country tour in the northern part of the East African smallest country has warned neighbours saying they are playing with fire.

Speaking to locals in the district of Burera, which borders Uganda directly
Mr. Kagame repeated his warning against “neighbors” who he said have continued support the country’s enemies.

Whereas he did not explicitly mention names, in the recent past, Uganda and Burundi have been named by his Kigali administration as funders of Rwanda’s dissidents and armed groups based in the DR Congo.

Mr. Kagame first read from a prepared speech which largely focused on poor performance of central and local government officials.

Referring to Burera, he said that it was the poor delivery of services that makes local people cross to “our neighbours” for basic services like education and healthcare.

Kagame wondered why he keeps hearing that some communities in Rwanda, including some parts of Burera district cannot access the state run television and Radio Rwanda (both operated under Rwanda Broadcasting Agency – RBA).

When the locals want to know international news or what is happening, he said, they have no option but listen to radios from “our neighbours”.

Addressing security, Mr Kagame said: “These neighbours of ours began long ago trying to cause us problems. It has happened all the time, all the time”.

He added: “This country Rwanda you see, you Rwandans, it’s our country. It’s a country we must develop [and] protect it [as well as] what we are building. We are not slaves of our neighbours…do you hear me”, Kagame asked.

Kagame said much of what border communities cross to find in the neighbouring country is actually available within the country. 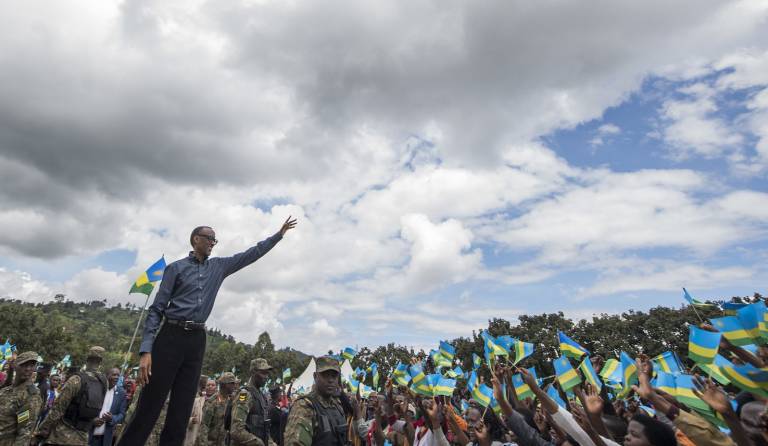 “Even the markets are available,” Kagame said, but that locals cross borders because officials are not helping them to improve livelihoods. The officials are “in towns and the capital city thinking the world rotates there,” said Kagame.

The long serving leader also said that he was informed that some people cross the border to Uganda to buy bread and other basic services.

He said: “I see bread in cities. Why can’t they produce enough to supply [in Burera and elsewhere in the country]. They produce so little which is unable to even satisfy towns. You see some people don’t know business. They make little to sell to the person close by. They make the products expensive. Why can’t they make the bread from here or supply here, instead of you having to cross the border”?

He continued: “As for the neighbours who want to cause us problems, ignore them. Let us solve our problems. Whenever they will understand that good neighbourliness is necessary, we will live peacefully together. For us we never disturb anyone. We live with everyone.”

“We want to live in peace with our neighbours. We want to work with them. We want to trade. But when you turn us into your garden where you do whatever you want, cultivate whatever, there is what we also want.”

After talking about neighbours and good neighbourliness, Mr. Kagame turned to dissident groups and individuals.

He said that security will be maintained at all costs.

He said: “We will have security either peacefully or [using] other means. We cannot plead with anyone to give us security. You have to give it to us whether you like it or not.”

“Am saying this to those amidst us or outside of Rwanda. Even those outside, we reach there. We will reach them. Those outside Rwanda trying to destabilize the country. Just give it time. Some come on their own and we solve the problem. There are others who have not brought themselves whom we will go for. Security will prevail, first of all, peacefully. Another way will be by force and we have the means…[to do so].”

He went on: “All those you [hear] on radios, internet and other platforms, saying nonsense. They don’t know what they are saying. They don’t know what they are playing with. They say whatever as people who are in America, South, France – thinking you are too far. Of course you are far, not near the fire. The day they will move close to the fire, it will burn them. They should be aware that, whether it is them or those supporting them, you don’t play from here.”

“Even those who want to join or support them, inform them that they are playing with fire which will burn them. We cannot plead with anyone for security.”

“We had insecurity for a long time. We lost so much. But that time is no more. It elapsed. In this period of stability, we want stability, either peacefully or [using] other means.”

“I was reminding you [Rwandans about security] because you have a role to play. But I would also like to make a commitment that whatever will bypass you will not bypass me.”

Kagame told Burera people that it was him and his officials to blame for whatever they are supposed to be receiving but hadn’t been delivered.