KAMPALA/KABALE/KIGALI – Rwanda National Police say two Rwandan nationals were on Sunday arrested by Uganda’s Chieftaincy of Military Intelligence (CMI) from “a village where they had gone to attend a friend’s party across the border.”

“The two are residents of Gahamba village, Tabagwe cell, Tabagwe sector, Nyagatare district, the same area at the border where the recent incident involving smugglers, who lost their lives, took place.”

Rwanda Police added: “The two Rwandans had earlier been urged by their friends not to go to Uganda because they feared they would be putting their lives in danger. However, they ignored the warning, insisting that they needed to honor Muhwezi’s invitation.”

They were later taken and detained in Mbarara at the second division headquarters.

Rwanda Police said the two are from the same area where two men – a Rwandan and a Ugandan – were on Friday shot dead by Rwandan security personnel in Ugandan territory.

In March this year, Kigali issued a travel advisory warning Rwandans against traveling to Uganda in the ‘wake of sustained arrests and torture of Rwandans by security agents in the neighbouring country.”

Uganda denies the accusations by Kigali saying those being arrested were suspected of being involved in espionage, a claim rejected by Kigali, families of the victims and those who have been deported.

Kampala accuses Kigali of economic sabotage, after cargo trucks from Uganda were blocked at the Katuna border.

Uganda has maintained that Kigali’s grievances are unfounded and criticised Rwanda’s travel advisory to its nationals.

On Saturday, the Uganda issued a protest note over what was termed as a provocative incident in which two people were killed by the Rwandese army on Ugandan soil at Hamisavu trading centre in Rukiga district.

In a statement released by Foreign Affairs Ministry, the Ugandan government expressed concern over the manner in which armed soldiers from Rwanda entered a foreign territory for more than 50 metres and carried out the gruesome shooting.

The Rwanda government however denied that two civilians shot by it’s army at her eastern border, were killed on the Ugandan territory.

In a May 25 statement, both Rwanda’s ministry of Foreign Affairs and Police now claims the “incident took place in Tabagwe Cell, Tabagwe Sector, Nyagatare District, Republic of Rwanda”, though the bodies of those killed in the skirmish are in a Ugandan hospital. 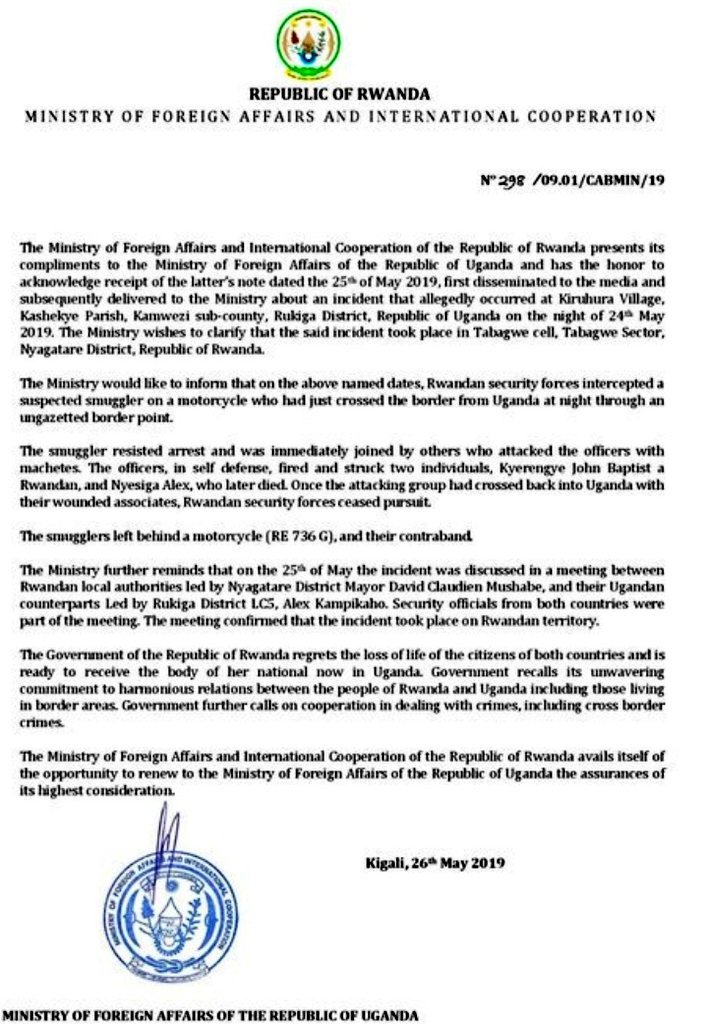 John Baptist Kyerengye, a Rwandan national and Alex Nyesiga, a Ugandan, were killed in the standoff  on Friday, May 24.

Uganda Police spokesperson Fred Enanga in an earlier statement said the incident that resulted into death of the two, happened after operatives from the Rwanda army  pursued their countryman inside Uganda territory and shot him in the head.

But the Rwanda Foreign Affairs ministry statement, while corroborating this version of events insists the incident happened on her territory.

“…on the above named dates, Rwandan security forces intercepted a suspected smuggler on a motorcycle who had just crossed the border from Uganda at night through an ungazetted border point,”  the statement says, adding that  – Mr. Kyerengye, the Rwandan national suspected of smuggling “resisted arrest and was immediately joined by others who attacked the officers with machetes.”

“The officers, in self defense, fired and struck two individuals, Kyerengye John Baptist a Rwandan, and Nyesiga Alex, who later died”.

The Uganda police says the armed Rwandan soldiers then immediately withdrew, after failed attempts to remove the body of the Rwandan victim.