DAR ES SALAAM – The Tanzanian government has officially announced a ban on the entry of all plastic carrier bags according to a press statement from the Vice President’s office.

The May 16, 2019 statement titled: “Notice To Travelers Planning To Visit Tanzania,” said the government was going to set up a special desk at entry points to enforce the measure.

The statement read in part: “The Government of Tanzania wishes to make an official note to travelers planning to travel to Tanzania that from 1st June 2019 all plastic carrier bags, regardless of their thickness will be prohibited from being imported, exported, manufactured, sold, stored, supplied and used in mainland Tanzania.”

In August 2016, the government warned manufacturers of plastic bags to diversify their line of business ahead of the January 2017 full implementation of a plastics ban. Today’s development is a second decisive leg of ensuring a plastic-free country. 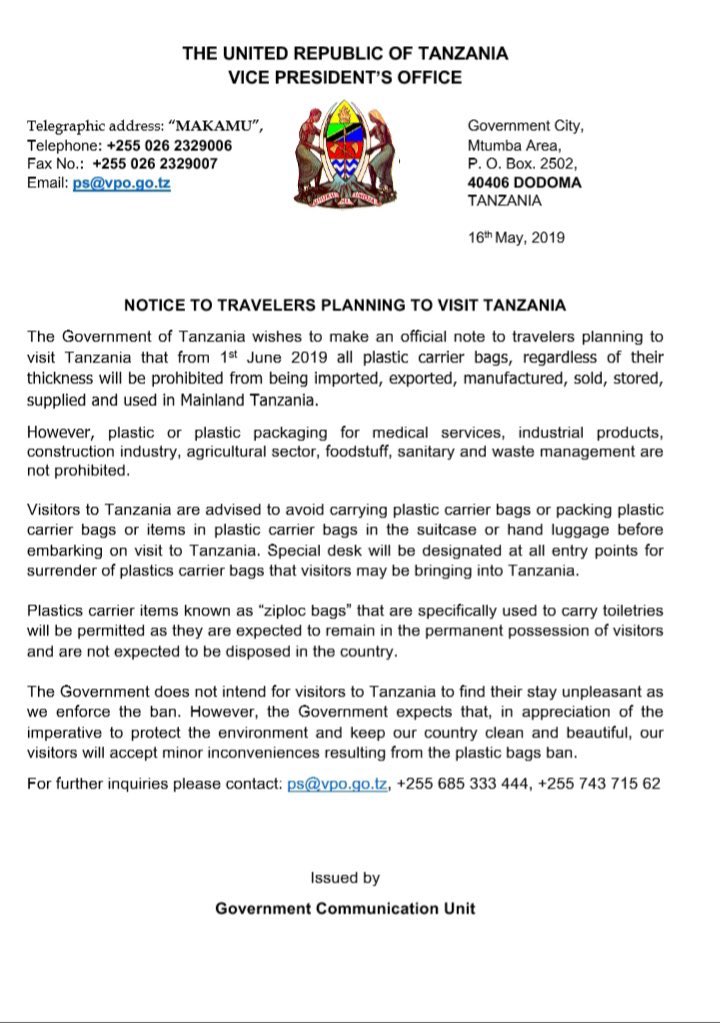 In April 2016, a minister of union affairs and environment, January Makamba, informed the National Assembly that the government was going ahead with its total ban on plastic bags.

‘‘We are warning industries that stern action, including closure, will be taken against those who will be caught manufacturing plastic bags,’‘ he said at the time.

Plastic carrier items known as “ziplo bags” that are specifically used to carry toiletries will be permitted as they are expected to remain in the permanent possession of visitors and are not expected to be disposed in the country.

“The government does not intend for visitors to Tanzania to find their stay unpleasant as we enforce the ban.

However, the government expects that, in appreciation of the imperative to protect the environment and keep our country clean and beautiful, our visitors will accept minor inconveniences resulting from this plastic bags ban,” the statement reads in part.

By effecting the ban, Tanzania now joins Kenya, Rwanda and Burundi in mitigating the effects of plastic bags waste as Uganda remains undecided.