Police spokesperson Fred Enanga says the incident happened on Friday, May 24, that resulted into death of two male adults a Ugandan national and a Rwandan, shot by operatives from the Rwanda army, who had pursued their countryman inside Uganda territory.

According to Mr. Enanga, the Rwandan citizen, identified as Nyengye Peter, now deceased, was a businessman, who attempted to cross into Rwanda, on a motorcycle, loaded with his merchandise, but turned back upon noticing security presence across the border. 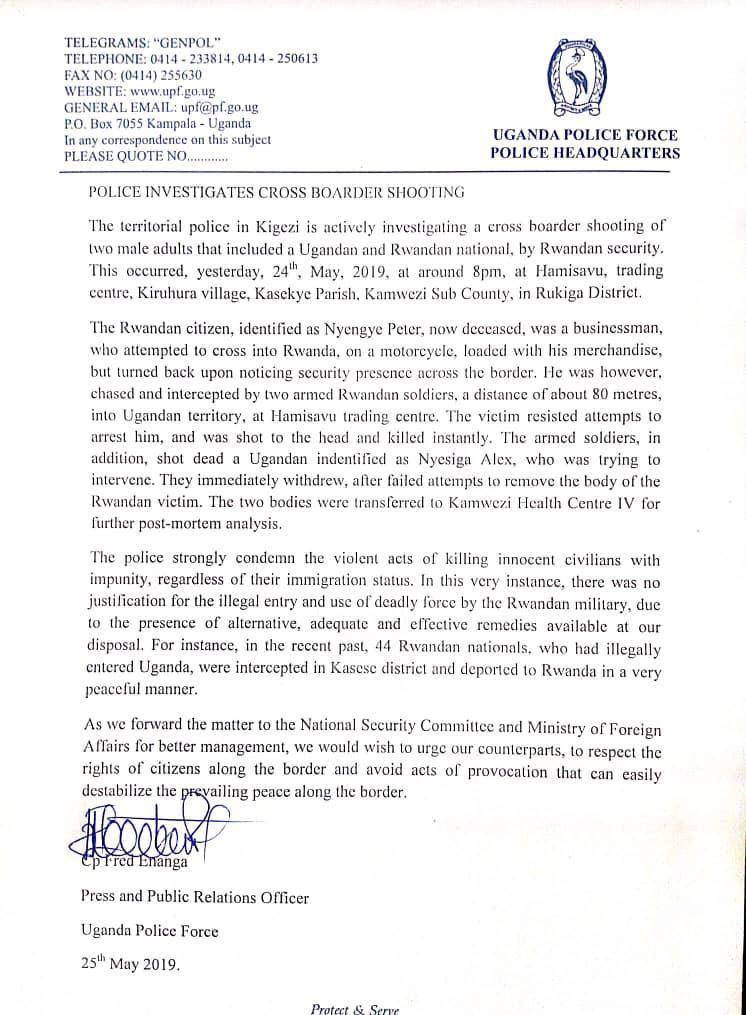 Mr. Enanga says that he was, however, chased and intercepted by two armed Rwandan soldiers, a “distance of about 80 meters, into Ugandan territory, at Hamisavu trading centre.”

“The victim resisted attempts to arrest him, and was shot to the head and killed instantly,” the police said.

We could not get an immediate comment from the Rwanda authorities.

However, the Uganda police say the armed Rwandan soldiers, in addition, shot dead a Ugandan identified as Alex Nyesiga who was trying to intervene.
They immediately withdrew, after failed attempts to remove the body of the Rwandan victim.

Police leadership has strongly condemned the violent acts of killing innocent civilians with impunity, regardless of their immigration status.

“In this very instance, there was no justification for the illegal entry and use of deadly force by the Rwandan military, due to the presence of alternative, adequate and effective remedies available at our disposal,” Enanga noted.

He said for instance, in the recent past, 44 Rwandan nationals, who had illegally entered Uganda, were intercepted in Kasese district and deported to Rwanda in a very peaceful manner.

As we forward the matter to the National Security Committee and Ministry of Foreign Affairs for better management, he said: “we would wish to urge our counterparts, to respect the rights of citizens along the border and avoid acts of provocation that can easily destabilize the prevailing peace along the border.”

Relations between Rwanda and Uganda have soured in recent past in the wake of a raft of grievances against the Kampala establishment, including alleged persecution and illegal arrest, torture and irregular deportation of Rwandans.
Uganda denies the charges.

The Planet is very sick! WWF asks you to add your voice for nature recovery