KAMPALA – The newly appointed Chairman of Parliament’s Committee on Commissions, Statutory Authorities and State Enterprises (COSASE) Mr. Mubarak Munyagwa is under scrutiny after opening a fresh inquiry into the central bank.

Kawempe South legislator Munyagwa on Tuesday started a fresh inquest into affairs at Bank of Uganda, a move that has attracted public criticism, after some sections of commentators alleged that the new COSASE chairman is hatching a window to cover up issues contained in the old committee report on the central bank.

On Wednesday, blogger Titus Seruga, under headline banner “(Cosase Chairman), Deputy Auditor General, and Kasekende in fresh BOU comedy” show wrote:
“If you haven’t noticed Munyagwa and his new Cosase committee have reopened the BOU mismanagement case, at first sight one would think they are trying to clean the Central Bank but if you know what their motive is then you can predict the future of their business”.

He added:
“I have a feeling that Hon. Munyagwa and his team want to eat some money or have already eaten from BOU to exonerate the Central Bank on any wrong doing by allowing it introduce new documents, to attract public attention they will first pull off a show and finally make a report in favour of BOU and receiving and accepting fake accountability”. 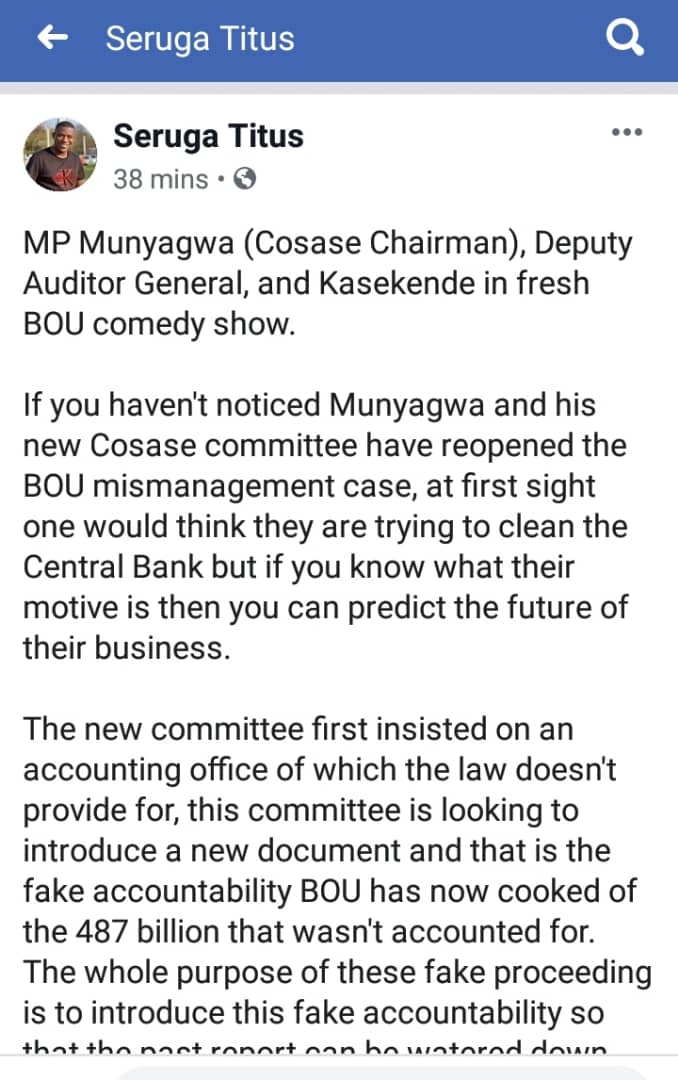 Mr Munywagwa was still busy in parliament when contacted for this story.

On Monday, the committee under the leadership of Mr. Munyagwa kicked out BoU officials led by the deputy governor, Dr Louis Kasekende for appearing without a letter from the accounting officer.

However, such a position is not provided for under the law and according to Section 10 of BoU Act, the board which is chaired by the governor is responsible for the general management of the affairs of the bank.

Mr Munywagwa and his committee’s new inquiry, follows a failed earlier attempt by the central bank to have the Auditor General to re-inquire into some of the business earlier completed and implicated some officials.

For example, in April, the AG Mr. John Muwanga rejected fresh requests from BoUto carry a fresh inquest on the UGX. 478 billion the central bank alleges to have injected in Crane Bank Ltd after the takeover turned controversial.

Mr Muwanga, in an April 4 letter to deputy governor Dr. Louis Kasekende flatly rejected a request by the latter, arguing that his report was already submitted to the Speaker of Parliament.
Dr. Kasekende had in a March 11 letter, asked the AG to undertake verification of documents that had not been availed during the audit, ordered by Parliament’s Committee on Commissions, Statutory Authorities and State Enterprises (COSASE).

But Mr. Muwanga wrote then:
“Regrettably, I am unable to undertake the verification since the report has been issued to the Rt. Hon. Speaker of Parliament on February 18, 2018. Any additional verification on the already issued report can only be undertaken with the authority of parliament”.