ENTEBBE – The New Apostolic Nuncio to Uganda, Archbishop Luigi Bianco has presented his credentials to the President of the Republic of Uganda.

The Archbishop Bianca, who arrived in country early, last month has met President Museveni for the first time to present his Letters of Credence, a formal diplomatic letter of appointment, during a ceremony held at State House Entebbe.

The Archbishop Bianca stressed the need for cooperation in the endeavour to boost education and health.

The representative of the Holy Father in Uganda said that it was an honour to present his letters to Mr Museveni, which accredited him to serve as Nuncio to the Uganda. He said the longstanding diplomatic relationship between Uganda and the Holy See was a sign of the mutual desire to work for the advancement of the human person and the society.

He mentioned that the bilateral relations were an expression of the collaboration which had at heart the integral spiritual and material good of all, saying that the mission of every diplomacy and especially that of the See was to strive for peace and the common good of humanity. 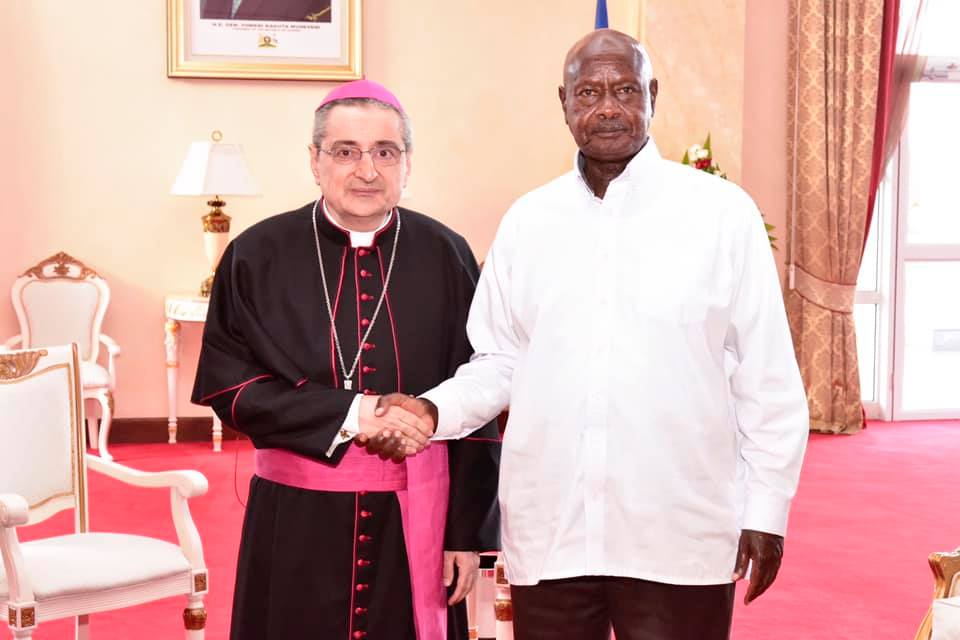 “The Catholic Church is committed to fostering the dignity of the human person, not in the abstract, but in the concrete human realities of everyday life. In this respect, there are many areas of necessary collaboration between the Church and the State. The Catholic Church in Uganda continues to contribute actively to the promotion of a just and peaceful society in this beloved country.

“The Catholic Church in Uganda is also committed to strengthening the existing good relationship with other Christian Churches and other religions, and so to foster religious freedom and peace in the country. I wish to thank Your Excellency for accepting my Letters of Credence and present to you and the people of Uganda my best wishes and prayers,” he said.

In his response, Mr. Museveni said he was thankful for the cordial greetings, prayers and blessings shared by the new Nuncio on behalf His Holiness, Pope Francis, and accepted his sentiments of goodwill for the country.

He said the relationship between Uganda and the Catholic Church faith had spanned over 600 years ever since the arrival of Portuguese missionaries of the “Order of Christ”.

“We also acknowledge and support the Holy See’s consistent advocacy for peace, defending the dignity of the human person and working for the integral development of human society. The Catholic faith and its imprint on Uganda and changing Uganda and lives for the better have grown immensely and irreversibly.

“Government’s investment in human capital development, social justice by providing access and opportunity to all, fighting corruption, and fostering national cohesion, aligns with the Holy See’s broader mission in Uganda and in the world. We look forward to a future of working cooperatively on deepening our democracy, fostering the dignity of the human person by escalating investments in human capital development, and promoting national as well as world peace and security,” he said.

In February this year, Pope Francis appointed Archbishop Bianco as the new Apostolic Nuncio to Uganda, taking over from American Archbishop Micheal August Blume who at the turn of the year was named the Nuncio to Hungary on transfer.

Archbishop Bianco, until his appointment to Uganda was the Apostolic Nuncio to Ethiopia, overseeing Djibouti and also in charge of Somalia. He was formerly Nuncio to Honduras.

Archbishop Bianco was born on 3rd March 1960 in Montemagno, Italy and was ordained a priest in March 1985.

Apart from his native Italian, Archbishop Luigi Bianco is a fluent speaker of Spanish, English and Croatian languages.