AIGP Fred Yiga the former Interpol Director on Friday May 10, at Interpol headquarters in Kololo, handed over office to SCP Benson Oyo-Nyeko who has been his deputy.

Mr. Yiga, during the handover, said he is happy with the state he is leaving the Interpol directorate, saying they have made the right collaborations that would ensure the fight against cross border crimes continues.

The outgoing Interpol director has tasked the new director to put focus on fighting human trafficking and other cross border crimes.

“We have made great strides but my successor should work hard to stop human trafficking which remains a thorn in the flesh. We can’t sit and watch as it continues,” Mr. Yiga said.

He also urged that more efforts should be put in place to ensure Interpol’s certificates of good conduct are not forged.

The Deputy Inspector General of Police, Maj.Gen. Muzeeyi Sabiiti, speaking at the handover ceremony applauded Mr. Yiga for the 32 years of dedicated service to the police force.

“I wish to congratulate you for the job well done. Your service record has been excellent, innovative and a committed officer that we shall miss as a force,” the deputy IGP said.

He said as a servant of the people, AIGP Yiga has put a smile on faces of many people, adding that while at Interpol; he has helped in fighting human trafficking and other transnational crimes that are rampant.

Maj.Gen.Sabiiti cautioned the incoming Interpol Director Oyo-nyeko, to work hard and continue with the good work of the former Director.

“We have to continue being organized so as to win the fight against transnational crimes. Take on the mantle from where he has stopped.”

“I am leaving here when I am happy because I know it is change of guards from one good man to another equally good officer,” he added.

Oyo-nyeko however noted he would take on the mantle from where his predecessor has stopped. 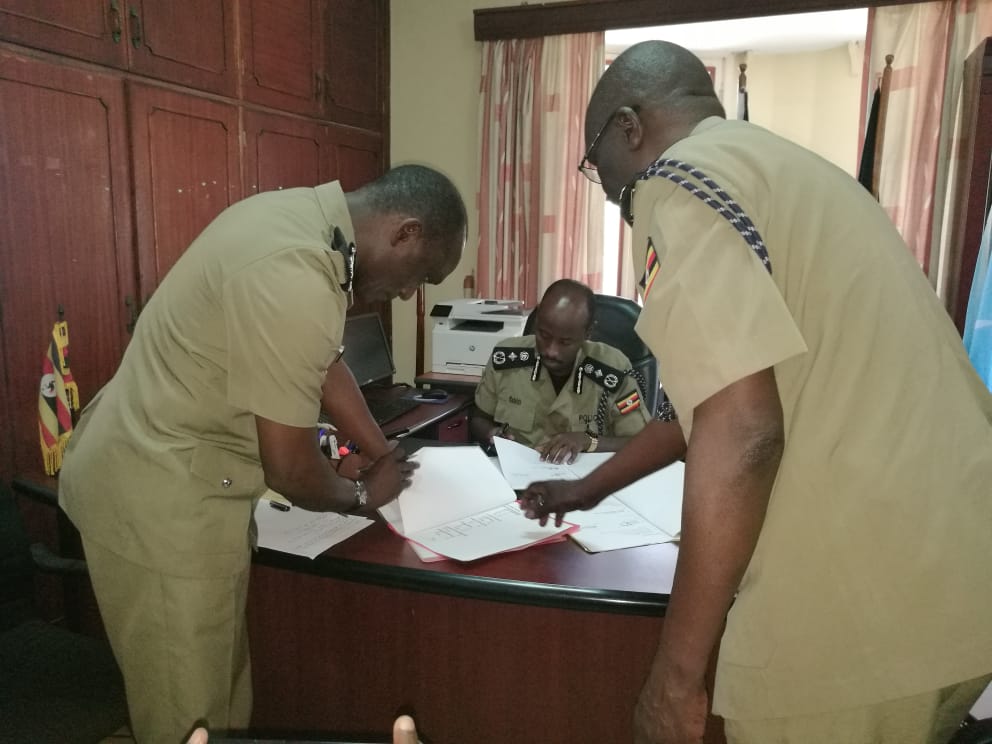 “For now I don’t have many words but my commitment is to bring to and end the suffering of our people to an end. Vehicle theft and human trafficking will be my first priority while fighting cross border crimes,” the new Interpol Director said.

AIGP Kasingye applauded AIGP Yiga for his good work tweeting that, “AIGP is a fantastic officer I ever worked with. Very disciplined, hardworking, respected his uniform, patriotic & has a high level of emotional intelligence. He has represented Uganda Police so well here and abroad. Whatever his next destination, he will still serve Uganda.”