In the application lodged to court on April 30, Kampala Associated Advocates want court to strike out the suit because of the central bank purported to sue Mr. Ruparelia and his Meera Investments Ltd through Crane Bank (in receivership), using an expunged process and wrong facts.

For example, the Central Bank sought to take on Sudhir as a sole shareholder of Crane Bank Ltd when records show that he run the bank alongside other shareholders including Mr. Rasik Kantaria, a Kenyan national and Mr. Jitendera Sanghani a British citizen, whose shareholding constituted a majority 51 percent. 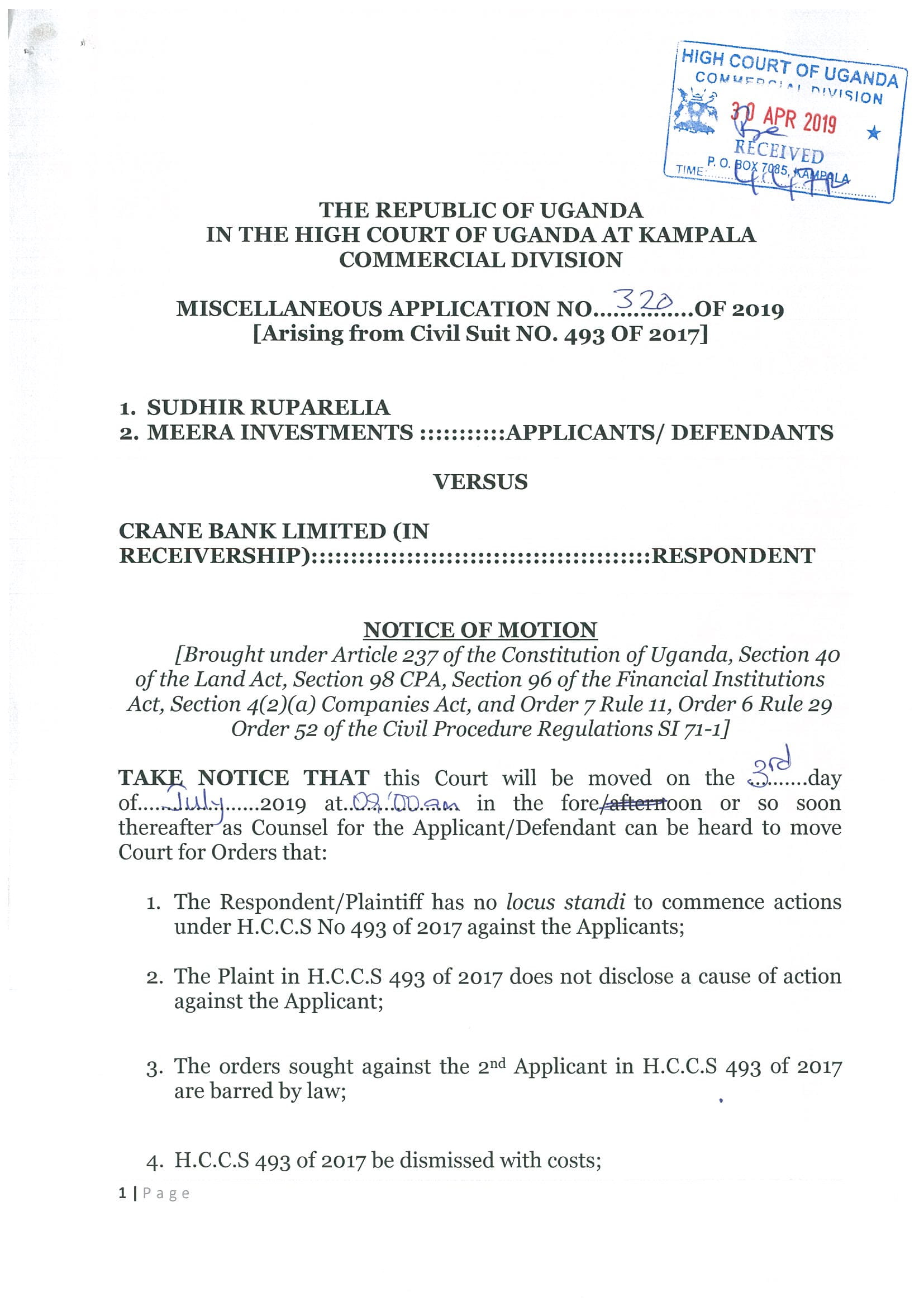 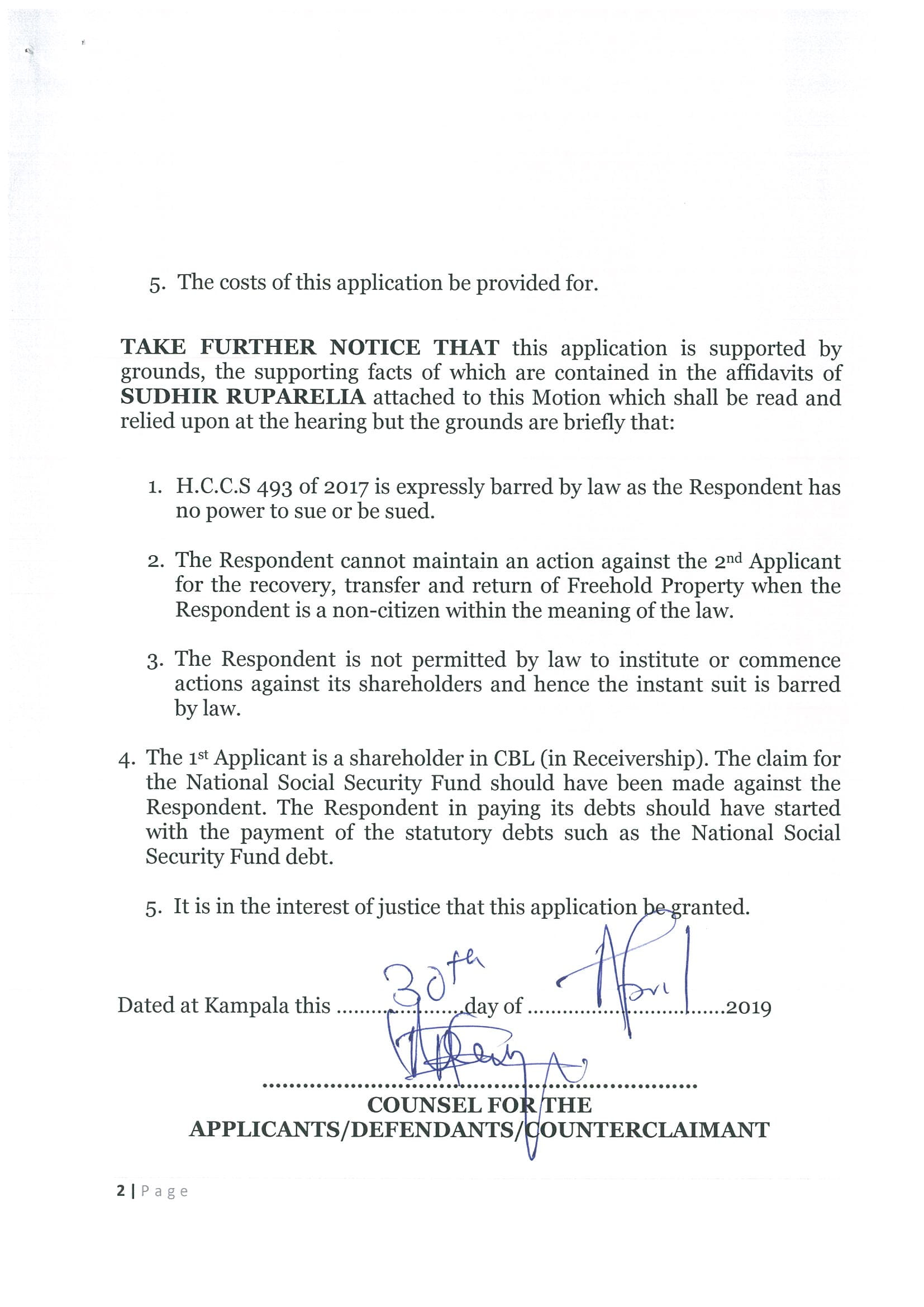 “I have been sued allegedly as being a sole shareholder, which is not true,” reads Mr Ruparelia’s affidavit in support of the application.

“I have been advised by my lawyers, whose advice I verily believe to be true, that the respondent has no power to commence his suit against shareholders generally and me in particular,” Mr. Ruparelia deponed.

The central bank on October 20, 2016 closed Crane Bank Ltd, previously one of the best performing banks before controversially selling it dfcu Bank on January 25, 2017, for a paltry Shs 200 billion.

After closing Crane bank and selling it off, the Bank of Uganda then sought to take Mr. Ruparelia to court personally and to purportedly recover Shs 400 billion from him including savings with the National Social Security Fund, and 48 land titles that housed Crane Bank branches.

But in the latest application, Sudhir’s lawyers have argued that Bank of Uganda should have deducted statutory obligations owed by Crane Bank when they put the bank under statutory management and that under the Land Act, the closed bank cannot own land.

“I have been advised by my lawyers, which advise I verily believe to be true, that under the Constitution and Land Act, the Respondent can’t own and hold freehold property and therefore is not capable of holding the suit property in its names,” reads the affidavit accompanying the application.

Court has set July 3, to start hearing the fresh application in the longstanding dispute between Sudhir and Bank of Uganda.

The central bank has since come under the spotlight after the closure Crane Bank Ltd backfired with both Parliament and the Auditor General faulting the BoU officials in the middle of the action.

After a raft of evidence before Mr. Katuntu’s committee, it is understood that Mr. Ruparelia is more sinned against after the central bank sought to blame him for the problems leading up to the closure of the bank after leads indicated a more rotten system at BoU.

Parliament’s Committee on Commissions, Statutory Authorities and State Enterprises in February released her report and made groundbreaking recommendations against Bank of Uganda and individuals named in what the MPs termed as “unlawful” closure of some commercial banks.

The COSASE  inquiry into the conduct of Bank of Uganda and it’s officials in the closure of seven banks, with some ending up in massive controversy that lasted for the last three months brought into focus the mismanagement of closed banks by BoU after the Auditor General Mr John Muwanga issued a stinging criticism of the central bank in a special audit that cited massive flaws in the closure of Teefe Bank (1993), International Credit Bank Ltd (1998), Greenland Bank (1999), The Co-operative Bank (1999), National Bank of Commerce (2012), Global Trust Bank (2014) and the sale of Crane Bank Ltd (CBL) to dfcu (2016).