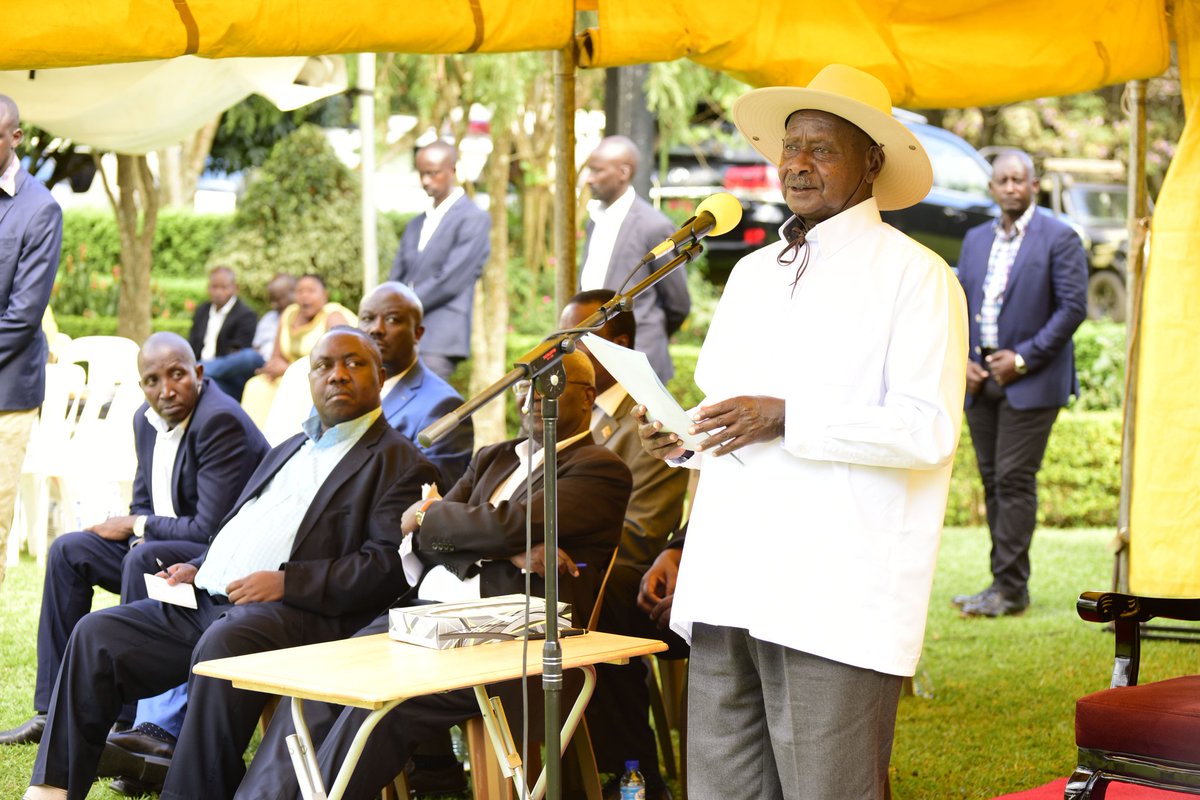 President Yoweri has continued to urge leaders to keep mobilizing, and educating people on other subjects of wealth creation that focusing on his oil. (PHOTO/PPU)

BUNYORO – President Yoweri Museveni has urged the people of Bunyoro, especially the youth not to be diverted by prospects in the oil sector and ignore engagement in job and wealth creation activities.

“Oil is good and it is coming but don’t be swayed from engaging in wealth and job creation activities. Government has identified seven sectors that every Ugandan can get involved in to create wealth and improve incomes,” he said.

The President was speaking during a Press Conference at Masindi State Lodge. The President was in Bunyoro region as part of his national tours to promote the government’s job and wealth creation campaign to drive people out of household poverty

The President, however, urged the people to exploit the infrastructure in place to create jobs including lodges, restaurants, etc that will support the oil sector. He urged youth engaged in the sand and other mineral products to exploit the need for stone pavers for pathways in the district to fill the gap.

Museveni who is also the NRM National Chairman said that it’s NRM’s ideology that mitigated people’s thinking that the only cash crops have to be cotton, coffee, tea…as proposed by colonialists.

“It’s a wrong perception for people of the modern world to believe that the traditional cash crops that were introduced by the colonial masters are the only items that can earn anyone money. Any agricultural produce including milk, bananas etc can be cash generating,” he said.

The President said while traditional cash crops earn a lot of money because they are grown on a large land acreage for a huge production, people on small land acreage should adopt NRM’s four-acre plan of cost-effective enterprises including coffee, fruits, food crops for the family, zero grazing animals, piggery, poultry, fish farming.

The President noted that the government put more emphasis on building the general infrastructure such as roads, electricity, hospitals, etc for every citizen to benefit from and urged people to focus on exploiting them to improve their household income.

“When you have some money, many things are possible. One can access the water by harvesting it by roof catchment, educate children, meet medical needs without government support,” he said.

During the press conference, the president assured the country that the future of Uganda’s economy is bright. “The economy is one of the fastest growing economies in the world”, he said.

Responding to the questions raised from the public phone calls and the journalists from Bunyoro media group, the president said that crime on the lakes will be handled as the government was planning to install a surface radar system for surveillance and security purposes to monitor lakes. This was after complaints that Congolese militias killing fishermen on Lake Albert is on the rise.

The President also said the government will protect the Bugoma Forest that is being cleared for sugar production. The forest is a matter of contention between the National Forest authority and the Bunyoro Kingdom.

Among other things, the President said he would address the issue of rehabilitation of Masindi Hospital, Kigumba technical institute, etc.