The telecom’s rates for Wallet to Bank – mobile banking and Pay Bill, have been revised and shall be applicable effective June 7, 2019.

Airtel has overwhelmingly increased the charges on  Airtel Money wallet to your Bank account transactions, while greatly cutting the rates on utility bill payments and ‘other payments’

“The general public is hereby informed that the Airtel Money tariffs rates for the wallet to bank (mobile banking) and Pay Bill will be revised and shall be applicable effective June 7, 2019.”

Check out the new rates below 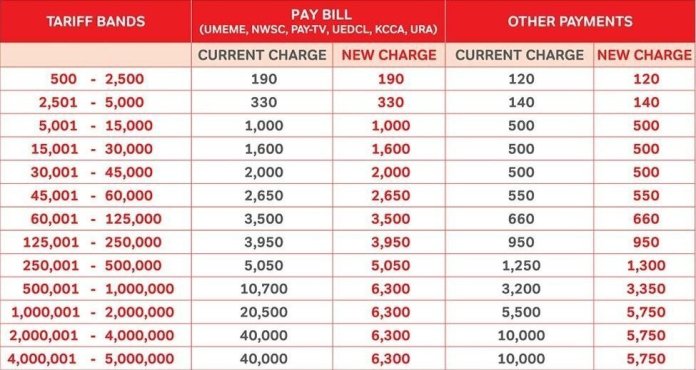 The increase in charges is equally the same in other bands, with the transactions over UGX 1,000,000 to be charged at least UGX 13,500 from the uniform UGX 4,450 that is being charged currently.

New charges on Pay Bill and other payments

The rates charged on payments for utilities, UEDCL, KCCA, URA  bills and any other payments have changed too, but only effective for transactions of over UGX 500,000. For the utility bills, a uniform charge of UGX 6,300 will replace the current charges of at least UGX 10,700.

This follows after MTN revised its mobile money rates in April for sending money, withdrawing, and making payments. These new rates, which were visibly an increase from the current charges, are set to be effective on this Friday, May 10, 2019.