KAMPALA – The Bank of Uganda has been put on notice after the High Court, on Monday, April 29, declared city law firm Sebalu & Lule Advocates “conflicted” in the ongoing commercial dispute between city tycoon Sudhir Rupareria against dfcu Bank on one hand and the Central Bank on the other.

In dismissing Sebalu & Lule Advocates from the Rupareria Group dispute against dfcu Bank, Justice Paul Gadenya Wolimbwa agreed with earlier judgment by colleague High Court judge David Wagutusi’s decision that where the lawyer-client relationship has been substantial, there are “strong policy reasons behind the protection of confidential information which the law seeks to protect otherwise the law would fail in its duty”.

“In this case before me, the information provided by the applicant [Crane Management Service Ltd] to wit that the 1st respondent [Sebalu & Lule Advocates]reviewed templates of tenancy agreements, that Mr Rajiv and Mr Sebugenyi discussed the instructions in telephone and email conversation and the complaint against the proposed amendment to the written statement of defense and counterclaim has given the respondents adequate notice of the confidential information that they are seeking to protect,” Justice Gadenya ruled.

Court also noted that information received possibly included background information about the existing tenancies that gave an insight into affairs and dealing of the applicant — the Rupareria Group’s CMS, “to which a reasonable bystander would say put him in position to know more than what he is willing to share”.

Justice Gadenya also observed that there was an advocate-client relationship between the applicant and the first respondent — Sebalu & Lule Advocates — when the former instructed the latter by e-mail and telephone conversations to review templates of tenancy agreements and a fee note of UGX. 7.5 million was generated by the law firm and directed to Mr. Rajiv Rupareria.

However the court also observed that, it is not true that there is still a subsisting Advocate-Client relationship between the Rupareria Group and the law firm, while it is true that Mr Sebugenyi’s last email to Mr Rajiv made it clear that the 1st respondent would be available to do further work for the applicant though there is no evidence to this effect.
“I cannot conclude that the 1st respondent is still the applicants’ advocate, the judge said, reasoning that the only obligation that the law firm owed to the applicant was “a fiduciary relationship that was created between the two when the former was instructed to review tenancy agreements in 2016”.

The court, therefore, dismissed the law firm from the case because the Rupareria Group had adduced evidence that the lawyers were “in possession of privileged and confidential information that came into their possession by virtue of being counsel to the applicant and is relevant to matters involving the applicant”.
“The first respondent is therefore in conflict and cannot ably represent the 2nd respondent. I accordingly grant an injunction stopping the 1st respondent from acting as counsel for the 2nd respondent in this case,” justice Gadenya ruled condemning Sebalu & Lule Advocates and dfcu Bank to costs the application.

In the suit, Crane Management Services Ltd contended that when dfcu Bank took over management of Crane Bank Ltd, it illegally took possession of the rental facilities from which the real estate company seeks to recover its arrears.

However, in defence, dfcu Bank contracted the Law firm of Sebalu & Lule Advocates but Mr. Rupareria says he contracted the same law firm in 2006 to draw and review tenancy agreements in respect of the said rental premises thus there is a conflict between the lawyer and his client.

Mr Rupareria also asked the court to issue a permanent injunction, restraining Sebalu & Lule Advocates from appearing as defence counsel for dfcu Bank in the other court cases that the two principals are battling out. 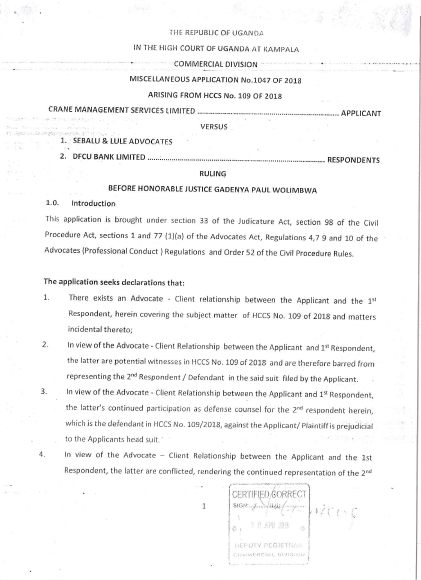 Section 4 of Advocates Act regulations, provide that an advocate shall not accept instructions from any person in respect of a contentious or non-contentious matter if the matter involves a former client and the advocate as a result of acting for the former client is aware of any facts which may be prejudicial to the client.

In his ruling delivered on December 21, 2017, the head of the commercial court division, Justice Wangutusi stated that Mr. David Mpanga of A.F. Mpanga Advocates and Timothy Masembe of MMAKS Advocates acted in violation of the Advocates (Professional Conduct) regulations.

Mr. Rupareria has failed the latest court decision as historical.

“Some of these old law firms, are very good lawyers but have been acting with impunity because they could abuse the ethics of the profession without being challenged. This is greed,” he said.

“This decision is historical. There are many young lawyers coming up and they should have good examples to follow,” Mr. Rupareria told journalists after the ruling.