In a function held at Peace Support Operation Training Center, Singo in Nakeseke District, Gen. David Muhoozi, the Chief of Defence Forces (CDF) said the 18000 troops under ‘Uganda Battle Group Twenty Seven (XXVII) will be deployed in Somalia with an intent of neutralizing Al-Shabaab threats and help restore peace and stability in the country.

Gen. Muhoozi said Battle Group 27 will be charged with the responsibility of sustaining peace and stability in Somalia under the mandate of the African Union Mission in Somalia.

He urged the soldiers to avoid negative propaganda and live up to their expectations since life in the mission area is not a picnic but a mission that demands hard work.

“The Somalia mission is not a picnic; it is a war situation. It is a dose and die mission. Watch each other’s back and ensure you adhere to the principles of war and standing operation procedures at all time.” Gen. Muhoozi said adding that the Somalia mission demands both discipline and sacrifice for one to be successful.

Gen. Muhoozi noted that the mission is built on the UPDF’s pro-people ideology which is part of the reason for the Force’s successes in its operations.

“As opposed to the previous perception that the Somalia mission was an impossible one, with discipline and adherence to rules of engagement based on our pro-people ideology, we made the mission possible.” Gen Muhoozi added.

He urged the soldiers to concentrate on their military tasks and not be diverted by unfounded stories being circulated by ‘enemies’ of the people.

He was responding to concerns by soldiers that there were clues that on retirement, their packages would be paid less the salary advances they received during their annual leave.

“Get it from me. That is a lie. No one will tamper with your pension. You do not have to worry about that but rather focus on how you can improve your household income so that when you retire you can supplement your pension,” he noted.

The 1,800 troops will be commanded by Col. Kosiya Kuteesa and deputized by Col Rogers Okiror.

The UPDF Commander Land Forces Maj Gen Peter Elwelu who accompanied the CDF applauded soldiers for successfully completing the training and wished them well in the mission area. 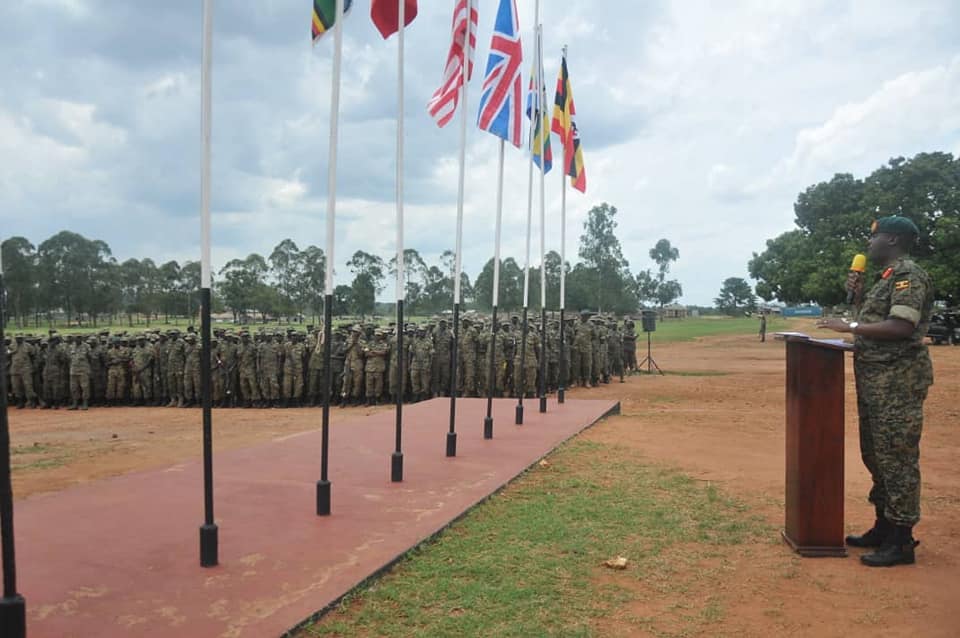 He reminded them that Somalia is a fighting area that calls for disciplined and professional soldiers.

Before their deployment, they underwent six-month’s training in basic combat.

Uganda is the largest contributor to the mission, with more than 6,000 troops.

AMISOM peacekeeping mission in the Horn of African nation continues to be threatened by al-Shabaab terrorists. In April this year, Uganda’s army reported eight UPDF soldiers had been killed and six injured in an attack in Lower Shabelle.

The al-Shabaab group has waged over ten-year insurgency to overthrow the weak UN, AMISOM-backed government and create an Islamic state in Somalia.

There have however been significant gains made with building the capacity of Somali security forces one of the top priorities.

Other people who attended the ceremony were the Chief of Training and Recruitment Maj Gen Willis Byarugaba, and officials from US, UK and French Embassies in Kampala.

Mr. Curtis Crum who is the country director for Global Peace Operation Initiative (GPOI) that helped in the mission training.