Unacceptable! Kadaga bashes IGG, orders inquiry into her conduct over letter to ISO 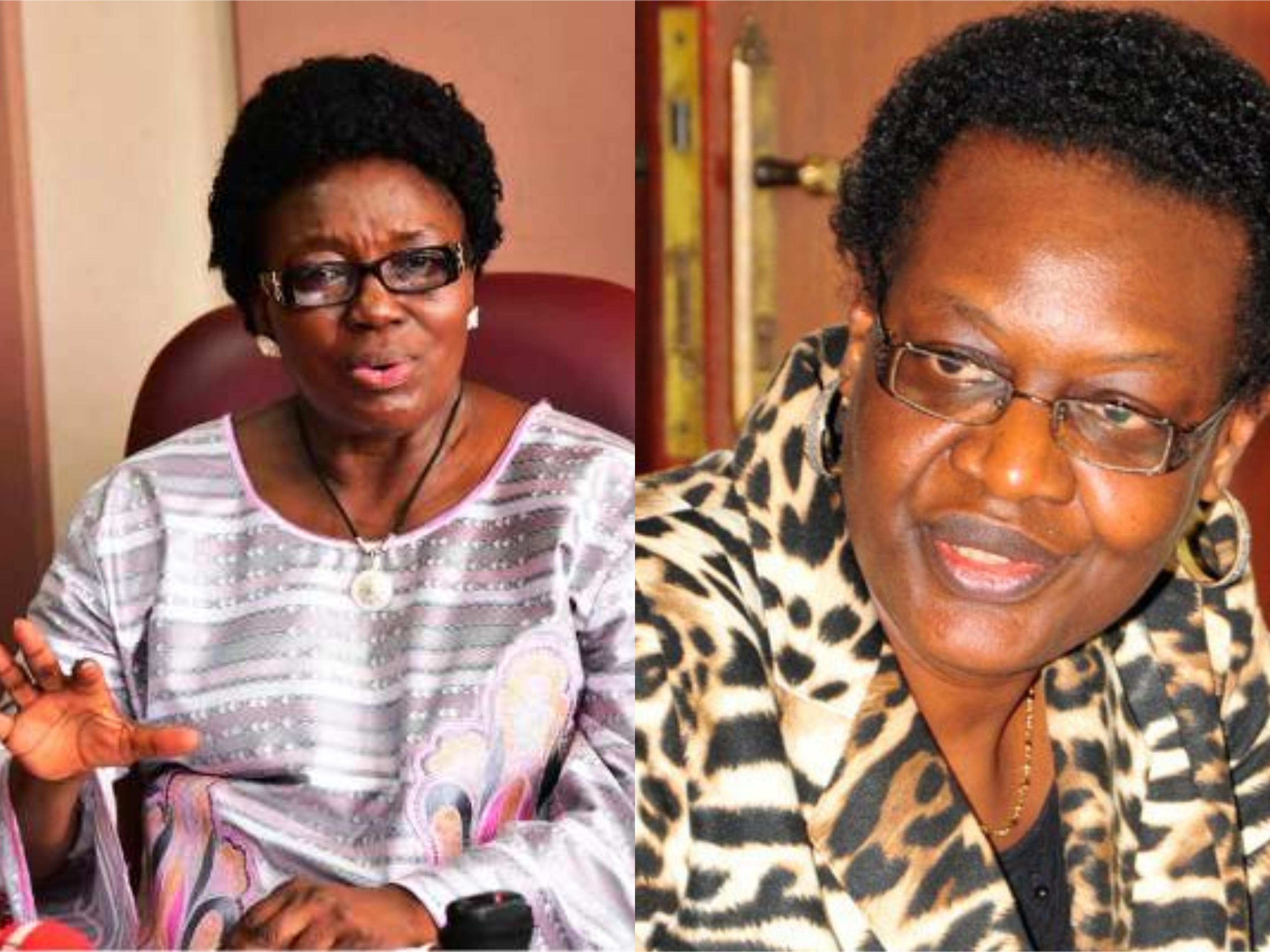 KAMPALA – The Speaker of Parliament Rebecca Kadaga has bashed the Inspector General of Government Lady Justice Irene Mulyagonja over demands of an ISO investigation on Members of Parliament and has labelled it an attack on the House before directing an inquiry into the IGG’s conduct.

Ms. Kadaga on Thursday afternoon, opened the session of  Parliament’s Plenary Sitting by letting fly a terse reply to Justice Mulyagonja’s January 19 letter in which she  asked the Internal Security Organisation (ISO) to investigate allegations of bribe-taking by MPs on Parliament’s Committee on Commissions, Statutory Authorities and State Enterprises (COSASE), who have just completed a groundbreaking investigation into Bank of Uganda and it’s senior officials over controversial closure of seven banks including Crane Bank Ltd owned by city tycoon Sudhir Rupareria.

“I find the contents of this letter to be an attack on Parliament of Uganda, an attempt to muzzle investigations, stifle the voice of the people, intimidate and blackmail Parliament and its members in the performance of its Constitutional functions,” the Speaker said.

“First of all, the IGG is an officer of this House, she reports to this House, but casually directs ISO to investigate us?” an incensed Kadaga asked before ordering an inquiry on Justice Mulyagonja.

“I want to refer the IGG’s letter to the Standing Committee of Rules and Privileges to investigat whether it doesn’t amount to contempt of Parliament,” she said.

“I will not allow anyone as long as I am the Speaker to blackmail this House”. 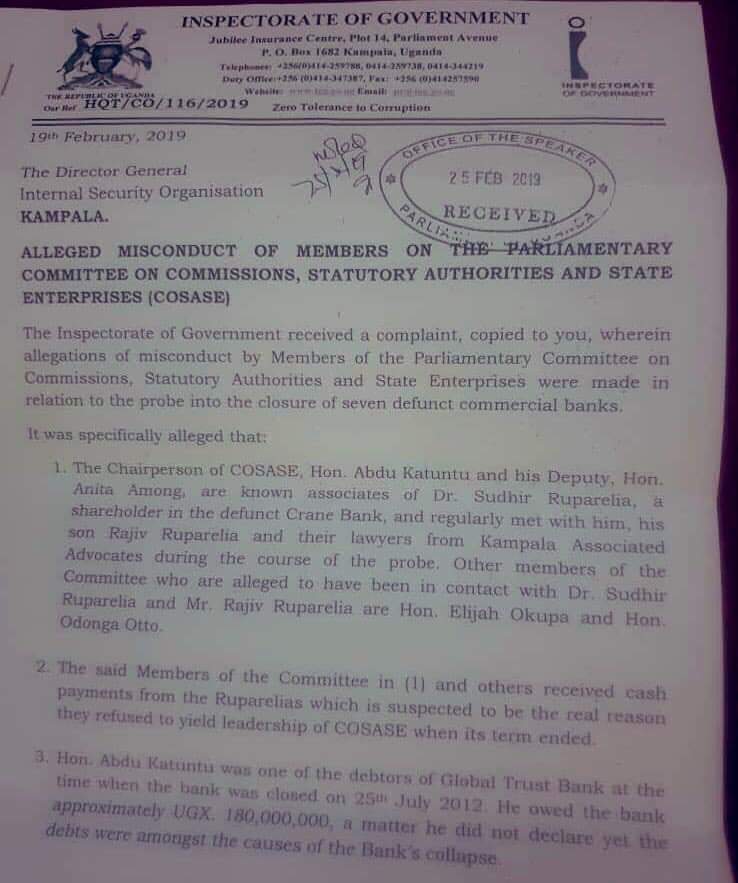 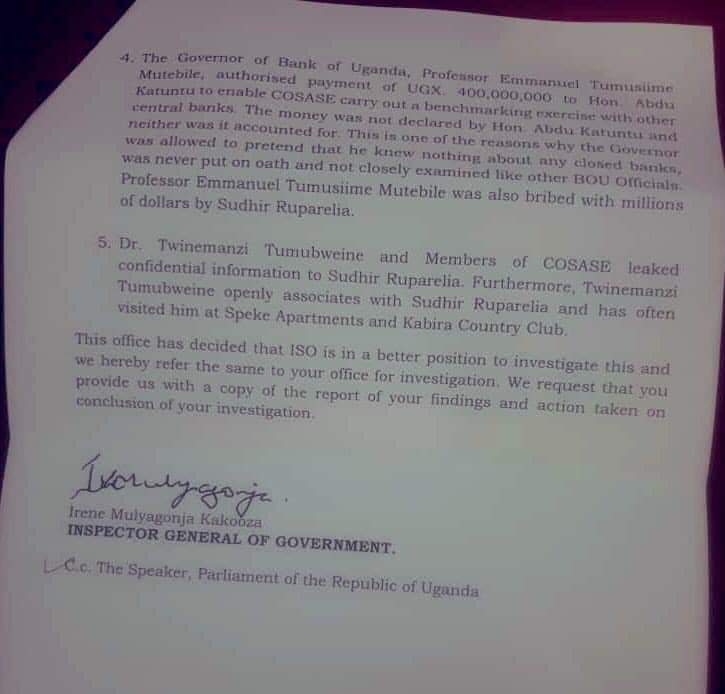 In her February 19 letter to ISO Director General, Col Kaka Bagyenda, the Ms. Mulyagonja says she had received a complaint from a whistleblower alleging that COSASE Chairman, Bugweri MP Abdu Katuntu and Committee members had taken UGX400 million from Bank of Uganda authorized by the Governor Emmanuel Tumusiime Mutebile for an official trip outside the country, without accountability.

The IGG also alleges that Mr. Katuntu and his deputy Bukedea MP Anita Among were associates of city Tycoon Sudhir Ruparelia, whose Crane Bank was a subject of the parliamentary inquiry. Ms. Mulyangonga then claimed that ISO was “in a better position” to inquire into a complaint by the whistleblower submitted to the two offices.

The IGG has since declined to comment on the matter.

But MPs on Wednesday wondered how the IGG would pass on a matter she has been asked to investigate to a spy agency.

Masaka Municipality MP Mathias Mpuuga was among the many that wondered how the IGG can be taken seriously after she sought to pass on a matter that requires investigation to ISO whose primary objective is intelligence gathering.

Parliament has this week been debating the report of the Committee on Commissions, Statutory Authorities and State Enterprises, which has made groundbreaking recommendations against Bank of Uganda and individuals named in what the MPs termed as “unlawful” closure of especially three banks, including tycoon Sudhir Rupareria’s Crane Bank Ltd.

The report called for the compensation of directors in three banks – the Crane Bank Ltd, National Bank of Commerce, and Global Trust Bank, after the MPs faulted Bank of Uganda for negligently disposing of the defunct banks and breaking several provisions of the Financial Institutions Act (2004).

The COSASE  inquiry into the conduct of Bank of Uganda and it’s officials in the closure of seven banks, with some ending up in massive controversy that lasted for the last three months has brought focus the mismanagement of closed banks by BoU after the Auditor General Mr John Muwanga issued a stinging criticism of the central bank in a special audit that cited massive flaws in the closure of Teefe Bank (1993), International Credit Bank Ltd (1998), Greenland Bank (1999), The Co-operative Bank (1999), National Bank of Commerce (2012), Global Trust Bank (2014) and the sale of Crane Bank Ltd (CBL) to dfcu (2016).

I find the contents of this letter to be an attack on Parliament of Uganda, an attempt to muzzle investigations, stifle the voice of the people, intimidate and blackmail Parliament and its members in the performance of its Constitutional functions.

I am very surprised that the IGG didn’t find it necessary to first consult my office on the matters contained in the letter before authoring the letter to ISO.

If she had called me, I would have been able to tell her there was no benchmarking which she wants to investigate. Benchmarking is with my authorization, therefore, I am also being accused of facilitating some benchmarking, but she wants ISO to investigate that. So you are going to see ISO come and check the Speaker’s letters! Is she right? This is what the IGG wants.

I say this because in the past, we have had good collaborations, she has called me on many occasions to find out information and clarifications regarding Parliament and I have responded to her requests.

I also take strong exception on paragraph two of the letter when the IGG alleges that the Chairperson of COSASE which he suspected to be the real reason they refused to leave the leadership of COSASE when its term ended.

I think it is this house which gave them an opportunity to do their work, I don’t see how the IGG can determine how work is done in this House.

Although I told you, that there were witnesses that hadn’t been interviewed, the real reason was that they were getting money and that implies that I was part of that money, that is what this means. So this accusation means that I championed the need for the Committee to be given more time and you who supported and approved are part of that to get more time for the people to collect money when we approved the extension.

I have explained in media the need to handle this probe carefully, this causes me to wonder why the IGG felt it necessary to write this thing in her letter.

I believe that this letter and contents are an attack on the dignity, immunity and indeed an affront on the dignity on all members of this House as guaranteed in the Parliament Administration Act and I condemn it in the strongest terms possible.

I will not allow anyone as long as I am the Speaker to blackmail this House.

I want to refer the IGG’s letter to the Standing Committee of Rules and Privileges to investigate this letter whether it doesn’t amount to contempt of Parliament.

First of all, the IGG is an officer of this House, she reports to this House, but casually directs ISO to investigate us?