MOGADISHU – Military commanders of the African Union Mission in Somalia (AMISOM), are meeting at the senior leadership level, to develop a comprehensive plan that will guide the implementation of the new Concept of Operations (CONOPS), which was approved by the Military Operations Coordination Committee (MOCC).

MOCC is a forum of Chiefs of Defence Staff and designated representatives of Troop and Police Contributing Countries, the Federal Government of Somalia, the UN, development partners, and the AU Peace and Security Council, in November 2018.

The plan, will among others, identify activities and operations to be implemented under CONOPS and at the same time lay out a timeframe and logistical support needed to implement the activities.

In attendance are sector commanders who lead military contingents from Troop Contributing Countries to AMISOM; representatives from the Somali National Army (SNA), the UN and development partners.

Simon Mulongo, the Deputy Special Representative of the Chairperson of the African Union Commission (DSRCC) for Somalia, urged the commanders to come up with realistic operation plans that will ensure the key CONOPS requirements are successfully implemented.

“We need to make do with the little resources we have and implement the new CONOPS to help AMISOM fulfill its mandate of securing Somalia,” said Mr. Mulongo during the official opening of the conference in Mogadishu earlier today.

The new CONOPS will guide AMISOM military activities and operations for the 2018-2021 period. 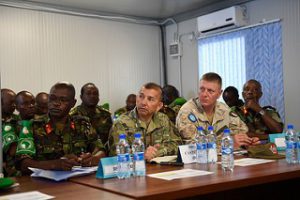 The crucial meeting is taking place as AMISOM is expected to draw down its troops by one-thousand, by end of February, in line with the UN Security Council Resolution 2431 of 2018. The Resolution calls for a further reduction in the number of troops, following the first reduction undertaken in December 2017.

Under the new CONOPS, several Forward Operating Bases (FOBs) are likely to be reconfigured and others folded up, as troop numbers reduce. However, AMISOM made an assurance that the changes will be undertaken with the utmost consideration of the safety and security of populations living in the regions where the FOBs are situated.

“In order to implement the Concept of Operations effectively, we will focus on conducting targeted offensive operations against Al-Shabaab to degrade its capability, deny them freedom of action and movement and secure our friendly forces in fulfillment of our mandate,” AMISOM Force Commander, Lt. Gen. Tigabu Yilma Wondimhunegn said in his remarks.

He described the meeting as crucial in aiding the planning of military activities and operations in the sectors.