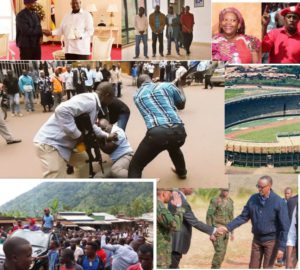 This week, a video of armed men wearing civilian clothes brutalising an unarmed man before kidnapping him in the centre of Kampala City on Thursday has outraged several people who have angrily reacted both on social and mainstream media.

Social media users expressed their anger as the video went viral, accusing the security chiefs and government of impunity.

The victim who was later identified as Yusuf Kawooya, a member of the Opposition DP and supporter of the People Power.

The videos have since attracted public condemnation.

“So how does gov’t come out to deny the fact that they are not responsible for the torture, killings and kidnaps of its citizens in the country,” said Jerem Olivia on Facebook. Ndyatunga Simon, another concerned citizen said,  “This is horrible and inhumane, why do you torture someone who is already down? It is not like he is refusing to be arrested!”

DP Spokesperson, Mr Kenneth Kakande, said Mr Kawooya is a fearless political activist under Uganda Young Democrats (UYD) a youth wing of the party  who has been on the frontline of most of the political activities in Kampala.

“He is one of the frontline activists in our party. Kawooya and more than 50 youth often converge at a bar opposite Theatre Labonita and discuss politics. I am sure those who grabbed him knew they would find him there because he is regular around that place,” Mr Kakande said.

Mr Peter Ssekabira, an accountant (according to his Twitter profile) in Kampala wrote: “This is Museveni’s Uganda, he won power to stop this Mafia-style behaviour but now it’s on the increase and unacceptable. Arresting officers are supposed to identify themselves and no right to beat a suspect who is not fighting back! State of terror!”

On Friday as pressure mounted, government tasked the security including Inspector General of Police (IGP) Martins Okoth Ochola to hunt and identify a group of armed men in civilian clothes who were recorded in a video severely beating a man before bundling him into a waiting taxi and speeding off.

Frank Tumwebaze, the Minister for ICT and National Guidance demanded the arrest and identification of the culprits saying that “anybody acting illegally should be dealt with in accordance with the law.”

“Police should investigate them,” Tumwebaze twitted.

The @PoliceUg should investigate them. Anybody acting illegally should be dealt with in accordance with the law. For ur info, some of us r suspicious of such if they aren’t schemes of anti-govt plotters to tarnish the name of @NRMOnline . @OkothOchola1 we demand to know these ! https://t.co/oKi96b0fRn

“The individuals involved in this video are from Room 75 CPS [Central Police Station] Kampala. They work with the Uganda Police Flying Squad,” twitted Opiyo adding that “We have positively identified two of them. We are verifying their details and as soon as we do, we will not only make it public but also commence processes to have them prosecuted.

The individuals involved in this video are from Room 75 CPS Kampala. They work for the Flying Squad. We have the names of the two beating Yunus Kawooya, the suspect. When we verify this information, we will make them public and pursue them rigorously @AKasingye @PoliceUg pic.twitter.com/WqOJpNRxWY

However, Mr. Emillian Kayima, the Police spokesperson distanced the force from such inhuman acts noting that none of their men had been involved or near the operation.

“No, they are not police officers and we are looking for them. The Police did not sanction of participating in that operation. What happened is unacceptable in a country like ours where rule of law is critical,” Kayima said.

The director of Interpol Uganda Fred Yiga also condemned the manner in which Yusuf Kawooya was arrested.

Addressing the media in Kampala yesterday, the Yiga said that all arrests must adhere to the arresting guidelines that were released by the Inspector General of Police.

In the same week, the IGG office was shocked by an illicit wealth of Senior Bank of Uganda officials including Governor, Emmanuel Tumusiime-Mutebile and his deputy Louis A. Kasekende.

With former BoU director for supervision of commercial banks Justine Bagyenda already investigated by the Financial Intelligence Authority (FIA) over allegations of illicit accumulation of wealth and allegations of money laundering, the IGG is looking at the wealth of several senior officials in the central bank.

One of the declarations of income, assets and liabilities forms filled by Dr Kasekende shows that he owns property worth about Shs8 billion in upscale areas of Kampala, Wakiso and other areas.

He is also a shareholder of Green Hill schools, a farm in Bukasa valued at Shs500 m and several commercial buildings which fetch millions of shillings in rent per year.

In the declaration form, Dr Kasekende says he picked loans from commercial banks and used his statutory salary, savings from research, gratuity payments and travel allowances to build rentals and acquire the assets.

PML Daily’s George Okello and Javira Ssebwami are closely following up this matter and will bring you 360? coverage if the matter as events unfold.

In other events that shaped this  week, Rwandan Paul Kagame fired his long-serving Defence Minister Gen. James Babarebe and IGP Emmanuel Gasane to restore his relationship with Uganda.

Gen. Kabarebe, had served in the position since 2010 and is shuffled into a new post as a senior presidential advisor on security.

Gen. Kabarebe’s departure is seen by pundits as a significant move towards the normalisation the country’s relations with Uganda, which have been frosty for several years.

Together with fellow MPs, we visited the victims of landslides in #Bududa. We delivered mattresses & some other items for relief. We also promised to push for a proper understanding of the problem, proper planning & subsequent budget allocation to mitigate the recurrent disaster. pic.twitter.com/ZKGtGJs95U

The legislators condemned what they described as government’s failure to implement a disaster risk management plan, saying it was responsible for the death of 46 residents so far.

The government had planned to relocate the Bududa residents in 2012 after another landslide claimed lives in the area in 2011. However, this was shelved under controversial circumstances.

But the legislators said the government is responsible for the deaths.

In others news, President Museveni tapped into a private visit by American artist Kanye West, and his wife, Kim Kardashian, a reality TV star, to market Uganda, Tourism Minister Ephraim Kamuntu has said.

Mr Museveni met the couple at State House Entebbe; the duo arrived in the country for a fun-filled trip combining a holiday, philanthropy work and Business.

But the visit has been met with criticism in and out of Uganda.

Bobi Wine branded the visit immoral and accused the internationally acclaimed rapper of using his influence to hobnob with a president who restricts freedoms and tortures opposition politicians.

But Prof Kamuntu said the couple’s visit was a great celebrity endorsement for Uganda and that the president, being the chief marketer of the country, he could not let the two leave without an engagement, encouraging them to promote Uganda’s Tourism and arts industries.

Namboole wedding on October 20 was a hoax!, a stadium declines to host Bobi Wine again

The controversies that surrounded the Kyarenga concert of the celebrated musician and politician Robert Kyagulanyi Sentamu state name Bobi Wine was that the stadium was to host a wedding on the 20th.

This was the justification as to why Bobi Wine was not allowed to host his much anticipated Kyarenga show as earlier planned.

However, on Saturday, October 20, our reporter visited the stadium for ‘prestigious wedding’ that led to the cancellation of the Kyarenga concert.

To the surprise, we found an empty stadium with only a few people jogging around the building.

As far as information is concerned, Namboole is expecting to host, Masaza Cup finals organized between defending champions Buddu and Singo October 27

The Stadium management for the second time withdrawn the offer to host the much anticipated Kyarenga concert citing CAF sanctions.

“We regret to inform you that the stadium shall not able bale to host your event as tentatively booked,” reads the letter to concert promoters.

In a letter dated October 19, Mr. Jamil Sewanyana the Namboole, the stadium manager, has again advised Bobi Wine and the his promoters to advised to seek alternative saying “we have received a complaint from our stakeholder in sports development- FUFA [Federation of Uganda Football Association] that raised the following pertinent concerns of national charter.”

“It has come to the Federations notice that Mandela Stadium management has entered into an agreement to have a public event take place on 9th November 2018 within the stadium,” Edgar Watson noted.

However, on Saturday the singer vowed to host Kyarenga despite the frustration by Namboole management and the State.

He also lashed out the management for being used by the state.

“To the administrators of Namboole stadium, officials of FUFA and others who are used in these kinds of dirty games, please know that Ugandans are watching,” Bobi Wine posted on social media.

To Namboole stadium admins, FUFA officials used in such dirty games, know that Ugandans are watching. No matter how much pressure you get from the regime, always do your job without fear or favor. Positions you hold are public ones & you must never use them against the people.

Bobi Wine also alleged that Namboole administration was put under intense pressure by the state for entering into an agreement with him to host his concert that the state is doing everything possible frustrate his other businesses.

Bobi Wine says, blocking Kyarenga is an attack on music, on the arts, on business, on free expression and on livelihood as citizens.

He, however, remained opportunistic and promised his fans that his administration is actively devising means for other venue options to host the Kyarenga.

“Regarding the concert, the good news is that we are actively looking at different options and will communicate very soon. What I know is that whether Namboole or not, we shall hold the KYARENGA album launch pretty soon,” he said.