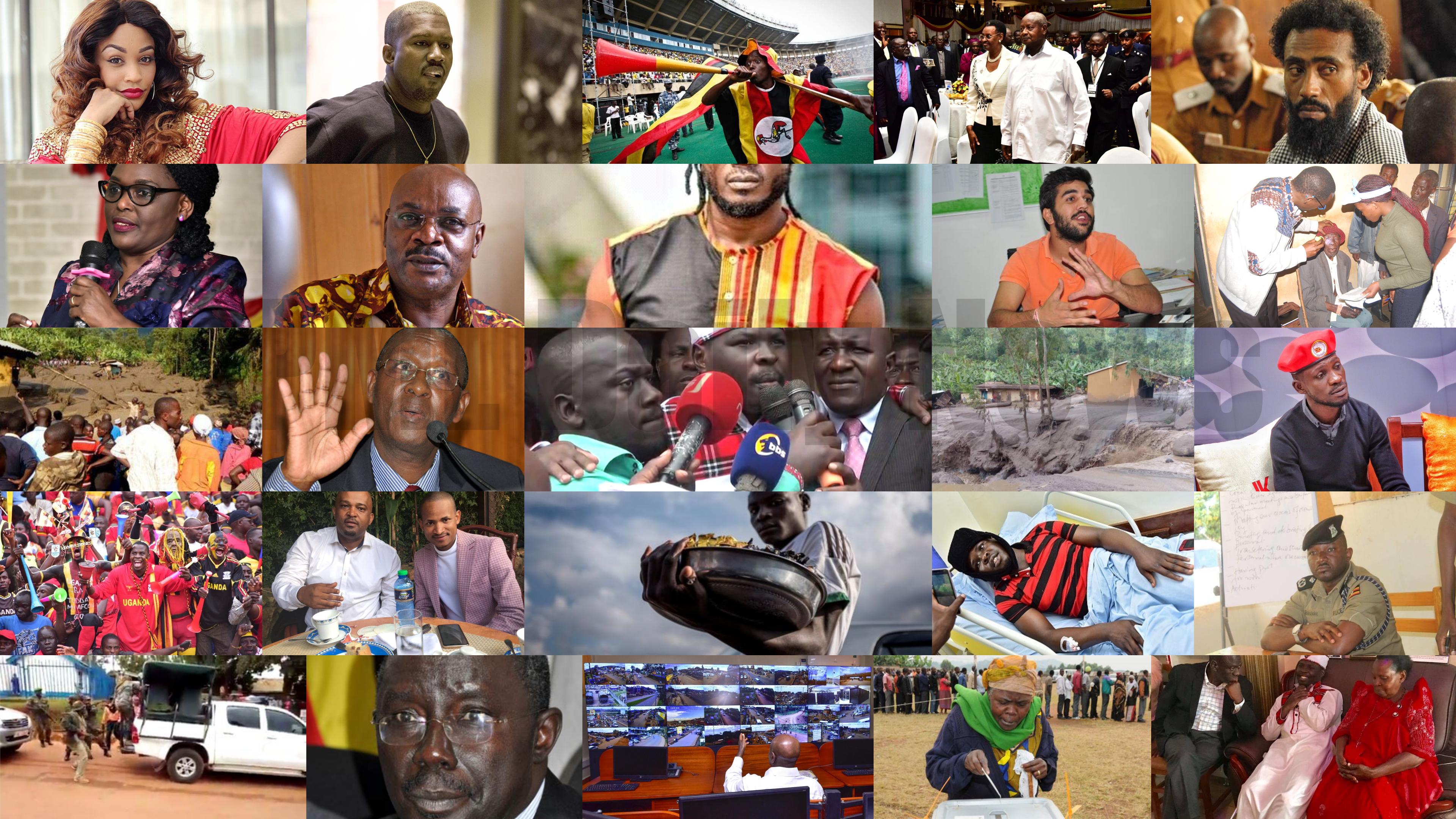 In an eventful week, At least 40 people have been found dead in eastern Uganda after heavy rains caused a landslide.

By press time, over 40 people were confirmed dead according to Commissioner for Disaster Preparedness Martin Owor.

The disaster took place on Thursday, and also involved a river bursting its banks in the town of Bukalasi in the Bududa district, sending muddy water coursing through a market.

Nathan Tumuhamye, the director of an organisation which helps communities recover from natural disasters and conflict told journalists that “four to five villages,” and possibly a primary school had been affected.

Some of the bodies were partly covered with banana leaves by members of the public.

I have received the sad news of landslides wreaking havoc in Bududa District, killing a yet-to-specified number of residents. The government has dispatched rescue teams to the affected areas. I urge residents to cooperate with authorities to mitigate possible further danger.

“I have received the sad news of landslides wreaking havoc in Bududa District, killing a yet-to-be-specified number of residents. The government has dispatched rescue teams to the affected areas,” President Yoweri Museveni wrote on Twitter.

Bududa district, in the foothills of Mount Elgon, which lies on the border between Uganda and Kenya, is a high-risk area for landslides.

At least 100 people were reported dead in landslide in March 2010 and in 2012 landslides destroyed three villages.

In the latest developments, the Ministry of Relief and Disaster Preparedness has asked for Shs10bn to relocate and compensate the affected Bududa residents.

The ministry said the money is the only long-lasting solution to saving the residents from landslides prone areas.

“Ministry of finance had promised us Sh8b every year. At the beginning of this financial year we were assured the money will come but by the end of the budgeting process we did not see the funds,” said Owori Martin the Commissioner for Relief and Disaster Preparedness.

However, Kyadondo East Member of Parliament Robert Kyagulanyi alias Bobi Wine has asked President Museveni to better use the money he splashes on Kampala streets to stop ‘PeoplePower’ and help the needy who die every day.

Bobi Wine, wrote on his tweeter handle saying that government should use taxpayers’ money to save their lives than throwing it anyhow.

“Ugandans would be more grateful if their hard earned money was invested in helping such vulnerable Ugandans other than having billions thrown around trying to stop #PeoplePower. We should step back and reflect on how to value the life of every citizen,” he tweeted.

“Each time, government promises to put measures in place to prevent such tragedies; well until the next time it happens and another promise is made. The solution lies in us having the right priorities,” Bobi Wine added.

Bobi Wine, on Wednesday, arrived in Kenya ahead of celebrations to mark Moi Day.

The legislator is in Nairobi at the invitation of Kenya Young Parliamentarians Association. Appearing on Kenya’s Citizen Television on Wednesday night, Bobi Wine also accused Mr Museveni of failing institutions in the country by surrounding himself with his relatives and tribesmen, who only praise and not criticize him.

He went ahead to say President Museveni is worse than ‘dictator’ Idi Amin Dada, who ruled Uganda from 1971 to 1979 until he was overthrown by the Obote II regime.

“It has been said before that power corrupts, absolutely, I believe he is drunk with power. He has been convinced by those who surround him that he is a god of sorts,” said Bobi Wine during the live interview hosted by Jeff Koinange.

However, a day he departed for Kenya on a five-day visit, the youthful MP had rallied the youth not to “sell their souls” but to rather stick to the truth and demand fair treatment.

Bobi Wine, while referring to incidences where Museveni has splashed chunks of money to urban youths including those in Kamwokya, said the youths are being taken advantage of, owing to their condition.

He said that these don’t need cash handouts, but economic empowerment and a good environment through which they can develop themselves.

“You have seen it even here in Kamwokya. Because of the kind of situation we grew up in, they use money to make us consent to something wrong,” Bobi Wine said.

“But I want to tell you that what we need as people is to be treated as citizens and to be respected.

“We also need to see that the leadership which we have elected puts in place initiatives that enable us to develop ourselves as people. Not just throwing us something.”

He also lashed out at president Museveni over trying to blind the youth with money handouts.

Zaake, who has been in India for over a month, arrived at Entebbe Airport at around 7.20am but police did not allow him to get off the plane.

The Police immediately picked him and put him in a waiting police van and drove off to Mityana, leaving his wife Bridget Namirembe stranded and bewildered.

The police later dropped him in Mityana at his home.

When former Forum for Democratic Change (FDC) and presidential candidate Dr. Kiiza Besigye on Friday visited him at his home Mityana Municipality said Mr Zaake has remained very strong and defiant in spite of the repeated brutal attack and torture by the National Resistance Movement (NRM) government.

I am very glad to see Hon Francis Zaake in high spirits shortly after another painful violation of his rights and freedom on return from treatment abroad,” reads Besigye’s tweet.

“The fight for our constitution, our country and our future is on! We shall win by defiance! Do whatever you can, wherever you are,” Besigye said.

Media reports also showed that the first four paragraphs of both speeches, just after the introductory remarks, carried the same words and run in similar order.

President Museveni, who was the chief guest, did not read his official speech during the national observance of the 56th fête in Kyotera District on Tuesday.

He told the audience that he had delayed in Kampala seeing how the newly-installed Closed-Circuit Television (CCTV) camera system at Nateete command centre would work to monitor parts of the city to detect criminals.

As such, Mr Museveni said his prepared speech would be circulated for publication in the newspapers since, according to him, it was late and people needed to go and enjoy themselves.

Statehouse has remained silent about on the issue.

According to the song that is making rounds on social media, Rema depicts about how someone she is in love with is not reciprocating the love.

“I’m not a mango that I’m going to ripen, neither am I a pawpaw. If you are not seeing my worth, if you are not taking good care of me, others will take me. Then you will realise that you were actually the one in wrong,” says Rema in the song she composed in the popular Luganda dialect.

“I decided to stay because of love. Wherever I pass, I leave men in want of me. I don’t entertain them. But you’re sleeping. Wake up. Don’t cry for me when I am taken,” she adds.

“I have failed to keep with your ways, I am tired of it. Don’t leave me in a sea of temptation, it might tempt me and I go too far.”

She, however, clarified the song is not about her life leaving social media and other audiences wondering as she insisted that none of that was about her life, but she is grateful that people can relate to the song.

Upon arrival, Kanye West and Kim were then flown by a chopper north of the country to the Chobe Safari Lodge in Murchison Falls national park where the couple will be residing for the next seven days.

The internationally acclaimed rapper is making the last touches on his ninth studio album titled ‘Yandhi’.

Initially, the album was scheduled for release on September 29 but it was pushed ahead.

Appearing on TMZ, recently, Kanye West said he hoped to record some of the songs in Africa. It is this reason that brings him to Uganda.

Uganda’s record label, Swangz Avenue has confirmed that it is working with Kanye West on a number of projects.

“I can’t tell you much. But it is true that he [Kanye West] is in the country and yes, we are working,” Julius Kyazze told journalists without disclosing more details.

There have been reports that the entire Chobe lodge is on lockdown and access has been restricted for the entire period when the two stars will be there.

According to John Ssempebwa, the Deputy Executive Director for Uganda Tourism Board’s “Kanye West’s visit is a private visit. He is in Chobe and it is locked. We can’t access it and because of who he is, he has denied us interviews. To get to him is a problem,”

“We know he is going to record songs for his next album. And that is going to make Uganda popular.”

Popular American reality TV show, ‘Keeping up with the Kardashians’ which features Kim and airs on E! Averages around 3 million viewers. It is likely that there will be scenes shot for the show during their stay in Uganda, largely showcasing wildlife.

Ugandan officials including Information Minister, Frank Tumwebaze have on Twitter welcomed the popular couple to Uganda.

“Welcome Kanye West to the Pearl of Africa beautiful Uganda. Thank you for choosing the home of the equator, chimps, rich cultures, great people mountain gorillas, Rwenzori ranges & many other gifts of nature in our Flora & Fauna species,” Tumwebaze tweeted on Saturday.