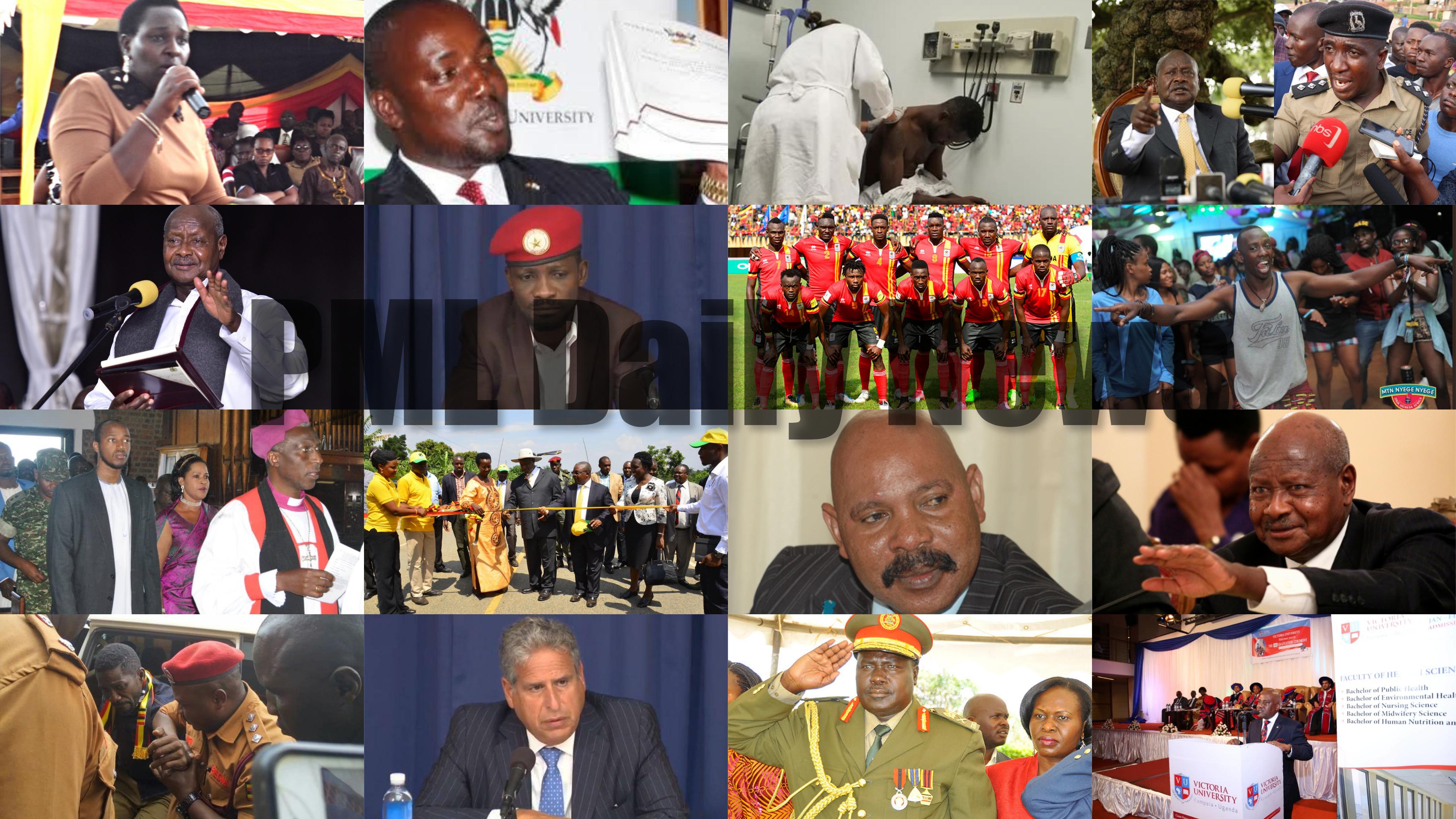 KAMPALA – Capping an eventful week, unknown assailants on Saturday night shot and killed former Old Kampala Division and Buyende district Police Commander Mohammed Kirumira and another woman later confirmed to be his sister. In news that gripped the country, Mr. Kirumira was shot dead in his car as he returned home in Bulenga, a city suburb on what police described as an assassination. President Museveni flagged off the investigations of what will be a defining city murder, following several previous others that remain unresolved.

In an eventful week, Kyadondo East MP Robert Kyagulanyi aka Bobi Wine took to the world stage to recount his Arua Municipality ordeal and castigated the “heartless” soldiers of the Special Forces Command (SFC) for unleashing torture on him and 32 others with impunity.

Bobi Wine in a statement also castigated President Museveni and other government officials for giving a different narrative of the events leading up to the chaos in Arua.

In a dossier, he denied stoning Museveni’s vehicle, as alleged by the State, and that neither was he involved in any violent protest.

Bobi Wine who travelled to the US late last week for specialised treatment addressed the World Media in Washington DC alongside his lawyer Robert Amsterdam lashing out at government inconceivable statements and failure to respect the human rights of its citizens.

His doctors had told him to rest and recover. But on Thursday, he defied their orders, launching a hectic round of congressional and diplomatic meetings to escalate pressure on Ugandan government, where crackdowns on the opposition have been intensifying under President Museveni.

Addressing international media, Bobi Wine and Mr Amsterdam vowed to press for sanctions from the US government against President Museveni’s government and top Ugandan officials involved in torture.

“For the first time, the world is up in arms against the oppression that Ugandans have been facing,” Bobi Wine told BBC in an interview.

“The military equipment we are supplying to Uganda is being used in a war of terror against Uganda’s citizens,” he said.

Mr. Amsterdam called for the suspension of military aid to Uganda under a law prohibiting the U.S. funding of foreign military forces that violate human rights. He also threatened to invoke other laws to seek U.S. travel restrictions on government officials. And he said he will campaign for oil companies, banks, and other foreign investors to restrict their investment in Uganda.

“We have made the determination that we are going to investigate the deaths, car accidents and suspicious poisoning of those who dare to speak about the government of Uganda. Bobi Wine and his colleagues can no longer be silent victims of torture and brutality,” Mr. Amsterdam said.

Following the international press conference that exposed Ugandan authorities, government blasted both Bobi Wine and Mr Amsterdam over ‘malicious’ comments to Uganda regarding the alleged torture of the legislator.

He said the was examined to a team of specialists in the presence of his Ugandan lawyers before he left the country, and no condition was found warranting further medical referrals either in Uganda or abroad.

“If indeed Bobi Wine was tortured or injected with unknown substances as being claimed, he should quickly return to Uganda to raise those matters before court where the trial will be, and they shall be transparently investigated, and culprits punished,” Opondo stated.

Minister Oryem said if the country is handed any sanctions, it will be the ordinary Ugandans to suffer, urging politicians to avoid pushing for selfish agendas at the expense of the country.

Tempers flared in Parliament early this week as legislators debated a report on the alleged torture of several opposition MPs, including Bobi Wine and Francis Zaake, by operatives from the Special Forces Command (SFC) at the tail end of the Arua Municipality by-election campaigns.

Debate on the report compiled by the Ad Hoc Committee appointed by Speaker Rebecca Kadaga had been mired in controversy with some ruling party MPs saying discussing would tantamount to offend the sub-judice rule since the MPs’ case is in court which Deputy Speaker Jacob Oulanyah ruled that debate on the report does not offend the rule.

The report accused the Police and the UPDF of “torturing and denying medication of choice to MPs and other citizens arrested during the chaotic Arua Municipality by-election.”

“The Committee notes that the deprivation of the suspects in their deplorable state, of access to private specialized medical help of their doctors, predisposed the suspects to grave danger to their health and possible health. Bobi Wine was detained in 2 military barracks in Gulu 4th Division and Bombo. The detention of suspects in those facilities violated Article 23 (2) of the Republic of Uganda,” the report reads in part.

President Museveni changed his earlier narrative on the chaos in the Arua Municipality by-election and claimed that Opposition supporters pelted the car he was moving in with stones, resulting in violence that saw several MPs arrested and one person shot dead.

In an August 31 letter to Speaker of Parliament Rebecca Kadaga, the President, who had earlier claimed that the luggage carrier in his convoy was the one that was hit by a stone, said the vehicle that was hit was the one where he was being driven in from a campaign venue to board the helicopter.

“It was just after passing the grader that I heard two bangs on my vehicle. I was then informed by my ADC that my vehicle had been hit by projectiles thrown by those groups in the opposition procession. I instructed my convoy to ignore those hooligans and proceed to the helicopter which they did without firing a single bullet,” Mr Museveni’s letter reads in part.

Mr Museveni in the same latter attacked international media and human rights defenders saying most of them are being used to achieve imperialists’ interests by reporting that Uganda is in bad light maintaining such are intended to slow down or even reverse the gains of the country.

“it is clear that these so-called human rights defenders are enjoying our good roads and staying in nice and brand new hotels in Arua and Gulu built during the NRM government filing malicious stories against Uganda using our first class internet backbone.”

“As for the cacophony of the so-called human rights defenders, in reality agents of imperialists’ interests and their local lackeys, I would advise them to stop wasting their time in Uganda which has got capable systems and institutions beginning with a competent and professional army that can decisively handle whatever problem or shortcoming that we may encounter,” the agree Museveni said.

Government also revealed that it is probing a number of non-governmental organizations (NGOs) for allegedly sponsoring political violence, protests led by opposition groups and activities aimed at undermining the government.

According to Esther Mbayo, the Minister for the Presidency, government has obtained intelligence information indicating that some NGOs fund opposition projects that the government believes are intended to cause unrest in the country.

Minister Lokodo ‘loses to the devil’

Ethics Minister Simon Lokodo has said the devil had beaten him after his failed attempt to ban this year’s Nyege Nyege music festival, which he alleged promoted open sex, gay relations and drug abuse.

“I tried my best to block it, but the devil has a strong hand. I had to backtrack.”

He had announced on Tuesday that the annual event would be banned but hours later he was overruled by Internal Affairs Minister Jeje Odong.

The government later gave the event, which started on Thursday, the go-ahead.

Artists from the US, Europe and other parts of Africa have been lined up to perform at the four-day festival.

UNRA in turmoil as govt moves to scrap roads authority

Uganda National Roads Authority (UNRA) in deep trouble after it emerged that Cabinet has resolved to disband the Roads Authority and return its functions to the Ministry of Works and Transport.

Cabinet chaired by President Museveni before he departed for China resolved to disband UNRA, with the Head of State, according to sources, not seeing the impact of their work since they started operations in 2008. Sources in the meeting said the President was not happy that most roads in the rural areas have remained impassable yet UNRA takes a huge share of the budget every financial year.

And now it has emerged that the Cabinet decision has rubbed UNRA senior managers the wrong way, with the Executive Director, Ms. Allen Kagina, reportedly feeling “betrayed” by government given the effort she has put in revamping the authority.

Mr Hamza Kagimu, a delegate and councillor in his petition filed before the Constitutional Court through his lawyers of Turinawe, Kamba and Company Advocates together with Sanywa Wabwire and Company Advocates says that the appointment of the NRM Party Secretary General, Deputy Secretary General, Treasurer and Deputy Treasurer should be declared null and void.