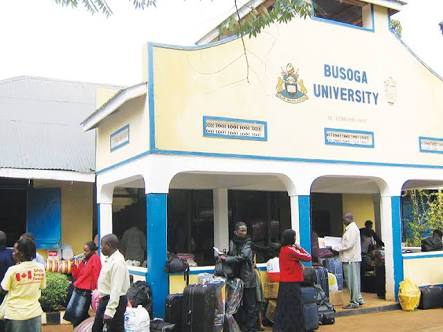 Just months before universities across the country reopen for the 2018-19 academic year, events surrounding Busoga University leave more than 2,000 students uncertain about their future.

Busoga University faces a bleak future because it is not allowed to admit new students, this means that the continuing students could be moved to other universities.

Reports indicate that even the government takeover has stalled because the University is embroiled in a debt scandal of Shs2.6 billion with a local bank.

Mr Moses Balyejusa, a student of social sciences at the University says this huge debt makes takeover of the university by government uncertain because many moveable assets that belong to the University and diocese have been mortgaged.

“And this puts many of us as students in a precarious position, we are now stranded after it emerged that the University is in debts amounting to Shs 2.6billion and that it has mortgaged most of the moveable assets,” said Mr Balyejusa.

Sources at the University say about 400 students of the School of Nursing are finding it difficult to join the new institutions because the fees being charged are higher than what they were paying at Busoga University.

Prof John Asibo Opuda, the executive director of National Council for Higher Education [NCHE] said the University is yet to despondent to the NCHE request for names of the 2,200 students to be re-distributed to other universities.

A May 9 letter signed by Mr James Mugerwa, the assistant commissioner for Vocational Education in the Ministry of Education, to the Principal of Busoga University School of Nursing and Midwifery states that his office had distributed their students to other institutions.

Reports at the Busoga University indicate that the University has mortgaged its campus land and other movable assets to secure the loan.

Mr Edward Gaamula, the Planning and development chairperson at the University said they obtained the loan in April 2016 and mortgaged its movable assets and land, which houses the university, the bishop’s house and offices of Central Busoga Dioceses.

Documents seen by PML Daily reveal the other mortgaged assets include Plots 73 and 83 in Kigulu, Buwooya in Iganga District in the name of Busoga University and Plot 95-111 on Saza Road in Bugiri measuring 8,174 acres with a leasehold of 49 years and 12 postdated cheques.

The Associate Prof David Lamek Kibikyo, the vice chancellor, Mr Edward Gaamula, and the Planning and development chairperson, Mr Joshua Kitakule, were presented as guarantors for the loan.

Mr Gaamula said the university has been paying Shs54m on the loan every month until last year when the National Council for Higher Education closed it for failure to meet the minimum standards.

“We had already paid up to Shs1 billion on the loan but since there are no students to pay tuition fees following the closure of the university, payment of the outstanding balance on the loan has become extremely difficult,” said Mr Gaamula.

Documents indicate that the loan balance reduced to Shs1.68 billion by October 4, 2017 when it was reviewed but has since stalled.

Bank loan
Bank of Baroda manager Ravi Kumar Gupta yesterday confirmed Busoga University has a loan with them but declined to give further details.

“The loan is there but we cannot disclose the details of our customer deposits and withdrawals,” Mr Gupta said in a telephone interview.

Takeover of the University

The President directed the Minister of Education, Ms Janet Museveni, also First Lady, in January that government takes over two struggling private universities; Mountains of the Moon and Busoga University.

In his letter, Mr Museveni explained that because of high demand for university education, the government has created public universities in Teso, Bukedi, Kabale, West Nile, Lango, Ankole, and Acholi and that there are plans to extend to other sub-regions such as Masaka, Karamoja, Bugisu, Bunyoro, Mubende and Sebei.

But a meeting between the government committee on one side and the university management and the founding body, Church of Uganda, on the opposite side, found it difficult for government to take the University with big debts and with most of the moveable assets mortgaged.

Although it was clear that the President said in case the university did not want to surrender the land freely, the government would be willing to buy it, Church of Uganda, the founding body of Busoga University has been cagy in releasing the land to government.
PML Daily has discovered that due to the stalemate between the Church and government over the land, sources at the Ministry of Education are considering to move the university to Namasagali, also in Busoga.

Mr EWK Ndiwalana, the vice chancellor in charge of finance and administration consented there was a problem in Busoga University but added he was not comfortable with the transfer of the University to Namasagali.

“I am aware of what is going on at the University and because the ministry is involved so much, I don’t want to give a comment about the same,” he stated on phone.

Mr Edward Bamuhamye, the University secretary said they were waiting for government to pronounce themselves on the matter.

A church leader who is not supposed to speak on behalf of the church said the University leaders say there is a huge amount of uncertainty around what to tell prospective students who face potential difficulties in joining other Universities to complete their degrees.

Efforts to get a comment from Busoga Diocese Bishop Paul Naimanhye were futile as he did not answer the repeated calls on his known telephone number.