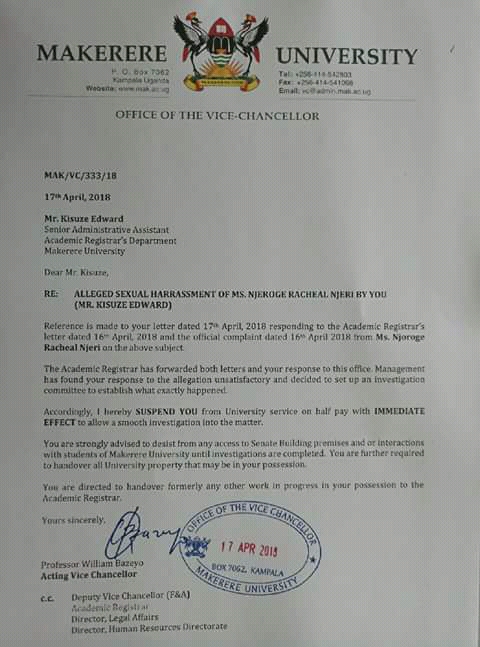 Makerere University administration has suspended one of its staff who was pictured performing a sexual act on a student on social networking site WhatsApp in the latest sex scandal to hit the country’s oldest public university.

The picture circulating on WhatsApp on Tuesday showed a man, who is in an office, bending between the legs of a young woman, seemingly licking her private parts.

And now the university administration has identified the man as Mr Edward Kisuze, an administrative assistant in the Department of the Academic Registrar, and immediately suspended him to allow further investigation into the matter.

In a letter dated April 17, 2018, the acting Vice Chancellor, Professor William Bazeyo, said he was responding to a complaint of sexual harassment from the student, who has since been identified as Racheal Njeri Njoroge of Kenya origin.

“I hereby suspend you from university service on half pay with immediate effect to allow a smooth investigation into the matter. You are strongly advised to desist from any access to the senate building premises and interactions with students of Makerere University until investigations are completed.”

The university spokesperson, Ms Ritah Namisango, said Kisuze had been arrested by the Uganda Police Force.

The incident comes a month after Dr. Swizen Kyomuhendo from the Department of Social Work and Social Administration was on March 1 suspended from university service after a television expose` left him in a compromising state with the un-named female student troubled with her marks she needed to graduate on time.

The expose` indicated the beleaguered university lecturer had suggested meeting the student in a hotel room. Makerere has appointed a Commitee to investigate the matter.

In a statement Tuesday evening, Makerere University Staff Association chairman Deus Kamunyu Muhwezi condemned the act of their fellow staff member, saying sexual harrassment has no place at the institution.

Mr Muhwezi lauded Njeri for coming out to expose the culprit.

On behalf of Makerere University Academic Staff Association (MUASA) and in unison with Makerere University Management, I condemn all forceful sexual acts against students that we are hired and entrusted to protect in the first place. It is despicable and disheartening for a responsible member of staff to sexually harass a student that is possibly seeking a service or any form of protection from a University staff.

I thank Ms. Njoroge Rachael Njeri for the heroic act of exposing such a monstrous staff at the risk of her social freedom. We encourage all students facing such anguish to come out and register their complaints. We will support you in bringing the perpetrators of such predatory practices to book.

We now hope that justice will be served for both the student and the suspected staff.

Warm regards to you all.