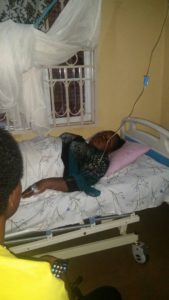 Police on Thursday afternoon shot dead two armed thugs after they attempted to rob a businesswoman in broad daylight in Bweyogerere, a suburb in Wakiso District.

According to eye witness statements recorded at police, the armed robbers, who were riding on a boda boda, attacked the owner of Wabiyoona Plaza near Mamerito Hotel while in a Premio vehicle. She had reportedly withdrawn money from the bank in order to pay off her workers their monthly salaries.

It is said the robbers tried to grab her bag containing the money. However, she resisted, prompting them to stab her in the neck and grab the money.

It is said the businesswoman screamed for help, attracting the attention of residents. It is said that a VIP escort car in the vicinity at the time scared the robbers and as they tried to flee, they fired in the air, attracting police.

It is said the police shot them dead as they tried to flee towards Namanve. An SMG rifle was recovered in the attack.

The businesswoman, who has since only been identified as Madam Wabiyoona is now admitted to Gwatiro Hospital in Bweyogerere.