Dr Stephen Njoroge Mwaura, the deputy country director of Medical Teams International, a non-governmental organisation, has reportedly sneaked out of the country after allegations came public that he raped Rosemary Nakamya, a former office assistant at the organisation’s offices on Katalima Road in Naguru, Kampala.A letter addressed to the  Meical Teams International board chairman and copied to various offices including the Labour ministry, a copy of which PML Daily has seen, indicates that in February 2017, while in office, Nakamya was raped by Mwaura.

The letter, written by Ms Nakamya’s lawyers, Kateera & Kagumire Advocates, indicates that the matter was reported to the MTI management but no action was taken against the perpetrator.

According to the expose’ by Kampala based social media activist Jeanette Mugisha,  Ms Nakamya was instead later sacked from her job.

When reports of the matter were exposed on social media, Wednesday morning, Nakamya was reportedly summoned to a meeting with MTI’s country director Andrew Hoskins. The meeting took place at Lavinia cafe in Naguru. By press time, the details of the discussion were still unknown.

Meanwhile sources indicate that Dr Mwaura has, following the fanning revelations, asked for leave and was at the airport by the time of filing this story.

Efforts to get a comment from MTI management were futile. 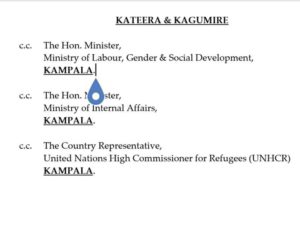