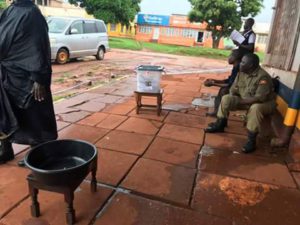 The Opposition FDC flag bearer in the Jinja East by-election is currently leading by more than 10,000 votes to his closest rival, the ruling party candidate.
Paul Mwiru is leading with 4,536 votes while Nathan Igeme Nabeta has 3,533. This is out of 33 polling stations, with 14 to go.
The election has been marred by allegations of ballot stuffing, with FDC officials earlier displaying before the media pre-ticked ballots in favour of the NRM candidate.
Counting is ongoing and more details follow.

FDC official, 11 others arrested over rigging in Jinja by-election