JINJA – The army has Thursday morning massively deployed in Jinja as residents woke up to vote in the Jinja East parliamentary by-elections.

Single files of soldiers armed to teeth were seen in Jinja town as the heavy morning downpour greeted the Thursday by-election that is putting the ruling NRM’ s Nathan Igeme Nabeta against the Opposition Forum for Democratic Change’s Paul Mwiru in a dead heat race.

Opposition activists equated the heavy deployment to the military taking over the exercise in which Nabeta is facing stiff competition from Mwiru.

It was not readily explained as to why the army was deploying its men but MP Francis Mwijukye  (Buhweju, FDC) said: “The army has taken over the polling exercise. This is unbelievable”.

The Electoral Commission (EC) on Wednesday warned candidates  against violence ahead of Thursday’s voting .

EC chairman Simon Byabakama told journalists in Jinja Town on Wednesday that he had received reports that supporters of some candidates were planning to disrupt the voting exercise.

Justice Byabakama said this would lead to disqualification. He added that they are ready for the voting exercise

The remarks came after 48 supporters of the FDC flag bearer Paul Mwiru were on Tuesday night detained for allegedly planning to incite violence.

The ruling party has invested heavily in the by-election with party Secretary General Justine Kasule Lumumba, camping in the constituency to oversee the campaigns.

President Museveni on Tuesday campaigned for the NRM candidate at a rally that was directly challenged by another opposition candidate rally addressed by figureheads – Kizza Besigye, Gen. Mugisha Muntu, Patrick Amuriat, Nandala Mafabi, Bobi Wine and others.

Meanwhile FDC spokesperson and Kiira Municipality MP Ibrahim Semujju Nganda has said two men were arrested at Iganga Road polling station with 8000 pre-ticked ballots. The ballots that Mr Ssemujju-Nganda showed to journalists all had Igeme Nathan Nabeta ticked ahead of his contender Miwru.

Mr Ssemujju-Nganda said the arrested men were taken away by police, to a yet-to-be-known destination. 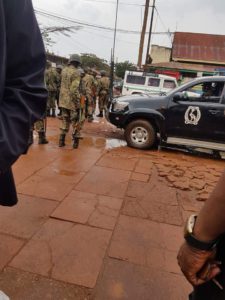 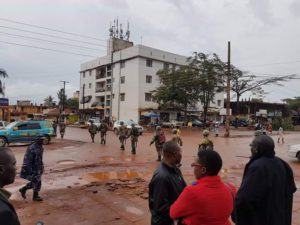 FDC official, 11 others arrested over rigging in Jinja by-election