Human Rights lawyers are challenging the move by the Military Court Martial to charge and remand a total of 13 boda boda cyclists, including Boda Boda 2010 leader and NRM chairman for Rubaga division Abdullah Kitatta.

On Monday, the cyclists appeared before the Court Martial and were charged with nine counts.

Ladislaus Rwakafuzi, a renown human rights lawyer, argued that military courts are established to handle military men and not civilians.

“I don’t think they will get fair trial in the military court. Even if they are found guilty with possessing guns, they are supposed to appear before the magistrate’s court or High court,” Mr Rwakafuzi said.

At the Military Court martial in Makindye, the 13 suspects heard their charges mentioned and the five charges were preferred against the accused persons of which the four are criminal offences of failure to protect war material, contrary to Section 122 of the UPDF Act, 2005.

“These sentences are capital in nature and are not triable by a UDC. However, the criminal procedure requires that a court without jurisdiction can only read the charges preferred and remand the accused, and they are not allowed to enter any plea. Therefore, the above accused persons have been remanded to Kigo Prison,” Akiki explained.

Legally, Rwakafuzi explained that the military has no jurisdiction to advance trail against the 13 suspects, adding that it should the job of the police.

“It is sad that the police have been shielding Kitatta and his group,” he added.

George Musisi, another human rights lawyer, working with Foundation for Human Rights Initiative, said it is debatable whether the civilians should be tried by the Court Martial.

“The UPDF Act allows the Military court to handle civilians with military offences,” he noted.

Two weeks ago Kitatta and the co-accused were arrested and detained by CMI at Wakaliga on accusations of murdering Case Clinic Accountant Francis Ekalungar who was kidnapped, murdered and his body dumped in Kajjansi, Entebbe Road.

On Monday, 18 of the suspects were released, without charges laid against them. According to Akiiki, the suspects have been released on police bond.

In the petition that has not yet been scheduled for hearing, Kitatta’s wife also sued the Chief of Defence Forces, Gen. David Muhoozi and the Inspector General of Police, Gen. Kale Kayihura asking court to force them produce her husband. 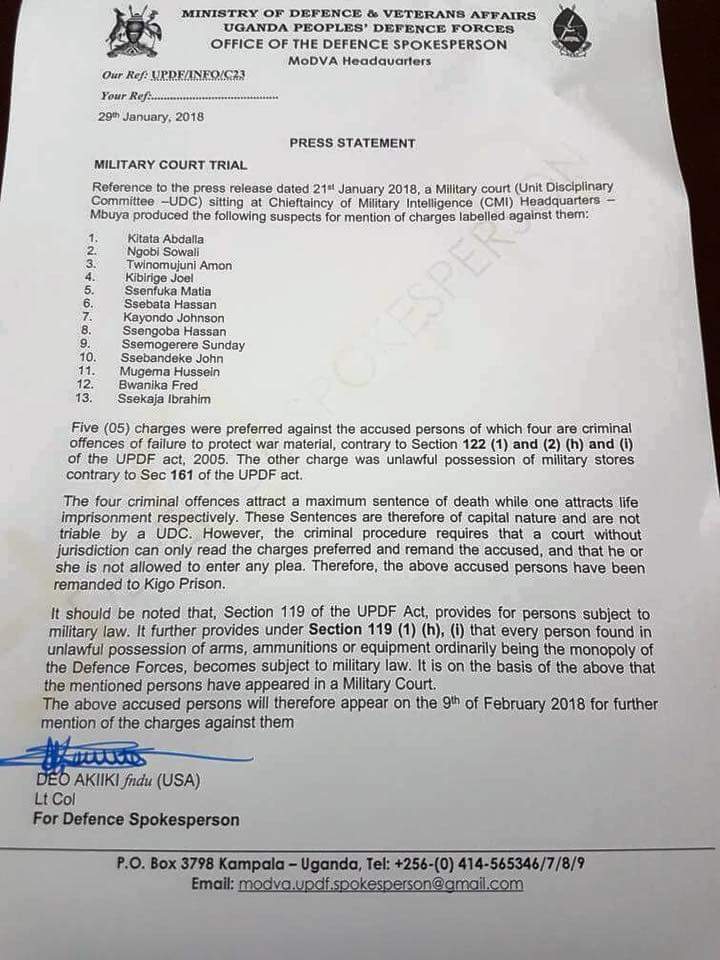