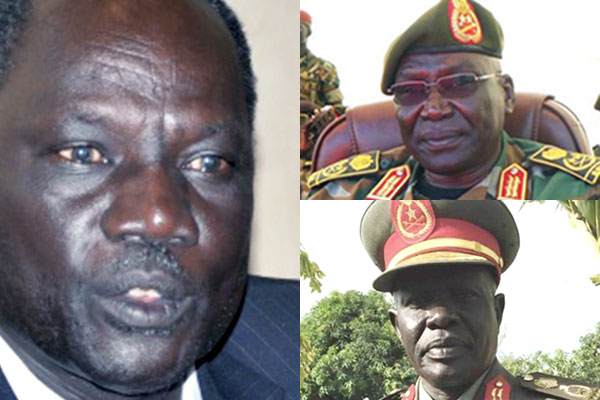 SOUTH SUDAN–The US Department of the Treasury has taken multiple actions against three top South Sudanese officials and related companies in response to the continued deterioration of the humanitarian situation in the country.

The US singled out Gen Reuben Malek Riak Rengu Gen Michael Makuei Lueth and Gen Paul Malong Awan for their alleged role in “undermining the peace security, and stability of South Sudan and subsequently slapped travel bans on the officials, among other sanctions.

Two of the officials sanctioned are serving in government. Gen Malek is the Deputy Chief of Defense Force and Inspector General of the Sudan People’s Liberation Army (SPLA), while Gen Makuei is the minister of information and broadcasting. Gen Malong was sacked from position of chief of general staff earlier this year and remains under house arrest in Juba.

While the Office of Foreign Assets Control (OFAC) designated the three officials for their roles in destabilizing South Sudan and three companies that are owned or controlled by one of the officials, the Financial Crimes Enforcement Network (FinCEN) issued an advisory to financial institutions concerning the potential movement of assets belonging to South Sudanese politically exposed persons.

“These actions send a clear message to those enriching themselves at the expense of the South Sudanese people that we will not let them exploit the US financial system to move and hide the proceeds of their corruption and malign behaviour,” said Sigal Mandelker, Under Secretary for Terrorism and Financial Intelligence.

“Treasury will forcefully respond to the atrocities ongoing in South Sudan by targeting those who abuse human rights, seek to derail the peace process, and obstruct reconciliation in South Sudan.”

As a result of the sanctions, the officials and their assets within US jurisdiction are blocked, and American citizens are prohibited from engaging in transactions with them.

FinCEN issued an advisory alerting US financial institutions to their potential exposure to anti-money laundering risks caused by certain South Sudanese senior political figures attempting to use the US financial system to move or hide proceeds of public corruption.

OFAC says that between 2013 and 2016, Malek held the position of Deputy Chief of Staff for Logistics of SPLA, a position that saw him play a central role in weapons procurement for the first several years of the conflict.

Malek was reportedly one of a group of senior security officials responsible for planning the April 2015 offensive in Unity State, which reportedly included widespread destruction, targeting of civilians, large population displacement, and numerous human rights abuses.

UN experts determined that ammunition supplied by the SPLA to youth groups was critical in sustaining the offensive. Malek allegedly supported a hardline position in a mid-2015 meeting of the National Liberation Council, which met and decided to reject a draft peace proposal.

“Information indicates that, in early 2015, Malek attended a meeting during which officials of the South Sudan defense ministry met with representatives of an arms firm offering to supply the SPLA with heavy military equipment,” OFAC said in a statement released by the Department of Treasury.

Malek is also accused of using his position as Deputy Chief of General Staff for Logistics to issue contracts with inflated prices in order to receive extensive kickbacks.

“Malek also reportedly controls a private company, Mak International Services Co Ltd, that sells explosives to private companies in South Sudan in an arrangement promoted on an exclusive basis by the SPLA, and received payments and cash deposits of hundreds of thousands of US Dollars by foreign-backed companies,” the statement said.

OFAC designated All Energy Investments Ltd, A+ Engineering, Electronics & Media Printing Co. Ltd, and Mak International Services Co Ltd – all based in South Sudan – for being owned or controlled by Gen Malek.

The information minister, a former commander who served directly under Gen John Garang during the liberation war, is accused of being complicit in attacks against UN missions, obstruction of the activities of international peacekeeping, diplomatic, or humanitarian missions in South Sudan, and obstructing reconciliation or peace talks or processes.

“In March 2014, Makuei supported and advocated for South Sudanese government inspections of all vehicles belonging to the UN and the UN Mission in South Sudan (UNMISS), reportedly obstructing the delivery of humanitarian goods in South Sudan,” the indictment says.

The US also accuses the minister of planning and coordinating an April 17, 2014, attack on the UN compound in the Jonglei State, capital of Bor (his native), in which three UN guards and 140 civilians, mostly women and children, were killed.

In addition, in February 2016, Makuei reportedly declared that territory in South Sudan’s Upper Nile region was a “war zone” that was not covered by the provisions of the ARCSS.  “Days later, violence broke out in the Upper Nile region and the South Sudanese military aided irregular tribal militias in storming the UNMISS Protection of Civilians site in Malakal. These forces looted property, set ablaze portions of the camp and killed civilians and humanitarian workers,” the accusation reads.

On April 23, 2016, Makuei ordered the closure of Juba International Airport, a decision the US says was hinged on his desire to obstruct the formation of the Transitional Government of National Unity. Makuei had claimed that the closure was due to the inadequate verification of the weapons accompanying opposition security forces, even though the South Sudanese military had already verified them.

The former Chief of General Staff of the SPLA remains under house arrest in Juba. Malong was once regarded as the most powerful man in South Sudan since the death of Gen Paulino Matip in 2012. Gen Matip controlled the largest militia and had more soldiers loyal to himself than the national army.

His death due to illness in 2013 left the stage for Gen Malong, whose military might was also considered to be as strong as half of the SPLA itself. However, schism within the SPLA as well as growing international pressure over Malong’s suspected direct role in the 2013 civil war saw Kiir replace him.

The sacking of Gen Malong caused tension in the restive nation after he retreated with soldiers loyal to him to his home town of Aweil in Bahr el Ghazal. Kiir had to sue for peace with Malong, who agreed to return to the capital, only to be placed under house arrest.

Now the US says Gen Malong was responsible for actions or policies that threaten the peace, security, or stability of South Sudan. He is also accused of obstructing reconciliation and peace talks processes as well as obstruction of the activities of international peacekeeping, diplomatic, or humanitarian missions in South Sudan.

Malong’s alleged order for his troops to disarm and later attack Nuer soldiers was one of the incidents that is believed to have led to the start of the 2013 civil war in South Sudan.

“Malong’s actions in December 2013 reportedly led to the indiscriminate killing of many innocent civilians, with the Presidential Guard force killing civilians in and near Juba,” the statement says.

Shortly after the signing of the August 2015 peace agreement, Malong apparently approved an air assault by the SPLA on rebel positions in Upper Nile State, the US says, adding that Malong planned to undermine the peace deal by sending militarized river barges with tanks and heavy mortars to opposition positions and bait them into attacking SPLA troops.

It has been reported that Malong – knowingly countermanding orders from President Salva Kiir – ordered the July 10, 2016 tank, helicopter gunship, and infantry assaults on then-First Vice President Dr Riek Machar’s residence and the opposition’s “Jebel” base in Juba.

The US also says Malong was responsible for attempted efforts to kill Machar, and continued to press his commanders to capture Machar dead or alive.

Machar, who survived a brush with death in the Congo in 2016, is said to be under house arrest in South Africa where he had travelled for medical attention.

“In April 2017, Malong ordered the SPLA to clear all people from the area around Wau to include civilians, and continued to try to clear opposition forces from Wau and other areas around Wau. Malong reportedly did not discourage the killing of civilians by the SPLA troops, and persons suspected of hiding rebels were considered legitimate targets,” the US says.

The sanctions against the officials and former official comes as the world’s newest state continues to struggle amid financial strain. The government of South Sudan has not paid civil servants over the last five months and the continue, rich in oil resources, can only afford to ration fuel as part of austerity measures.

South Sudan remains a restive country amid growing disillusionment by the millions of its citizens who remain refugees despite the hope that the independence, in 2011, from Sudan after more than six decades of struggle dating back to the Anyanya militia days, had given the country.