One dead in flooding at Uganda-South Sudan border 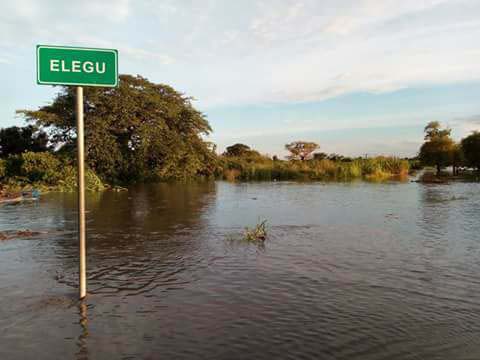 GULU. At least death has been confirmed as hundreds of people spent Tuesday night on tree tops and the roofs of their houses as heavy rains caused flooding at the Uganda-South Sudan border in Elegu Amuru District.

Nearby River Unyama burst its banks at around 4 p.m. flooding a vast area following the downpour on Tuesday night which also affected Pabbo and Atiak sub-counties.

The dead person has been identified as Charles Kawooya 30, a driver of motor vehicle Reg. No. UAX 917J from Masaka District. He reportedly died after his vehicle plunged into the Unyama river in Otong Parish, Pabbo.

“We have contacted the Director of Fire and Rescue Services for emergency assistance. We are at the scene,” Okema said.

Atiak Sub-county chairman Wilfred Baguma Odiya told PML Daily that more than 12 kraals with more than 1,000 head of cattle have been submerged.

The flood waters have swept through most houses within Elegu trading centre, including the main market and border check point.

In Elegu, at least 35 people and several animals were pulled out of the running water.

Many bridges have been swept away leaving some areas cut off in the two sub-counties. Elegu town council is flooded and the police station has been abandoned.

Police say at the moment they cannot establish the full extent of the flood damage but they suspect that more people could have been killed.