Kenyatta says will accept result if he loses 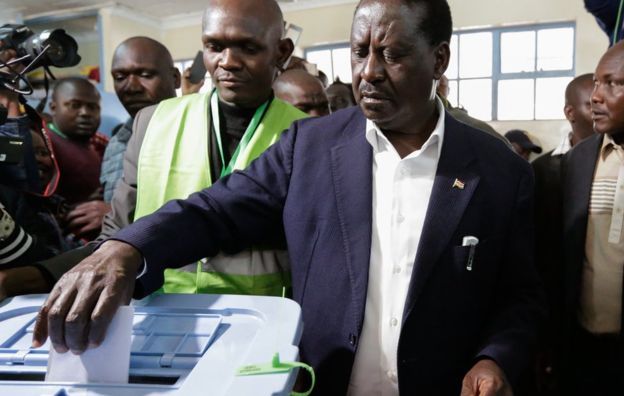 People are voting in Kenya’s general election amid fears that the result could trigger communal violence.

President Uhuru Kenyatta called for unity, saying he would accept the result and urged rivals to do the same.

Queues at polling stations formed early and some minor stampedes were reported. Kenyan radio said one person was killed in clashes in the southern Kilifi area.

The contest pits Kenyatta against his long-time rival, Raila Odinga, and is seen as too close to call.

Kenyatta, the 55-year-old son of Kenya’s founding president, is seeking a second and final term in office. Six other presidential candidates are also on the ballot.

The final week of campaigning has been marred by the murder of a top election official and claims of vote-rigging.

This time long queues were seen at some polling stations, and video footage at one showed people injured on the ground after an apparent stampede.

The polls were due to close at 17:00 local time (14:00 GMT), but the electoral commission said polling stations would stay open in areas where voting had been hampered by heavy rain.

One of the presidential candidates was unable to get to his polling station because a bridge had washed away in northern Turkana county, according to one newspaper report.

Other problems also emerged. One polling station in four was apparently without mobile phone coverage, meaning that officials would have to drive to the nearest town to send results.

Kenyatta voted at lunchtime in his hometown of Gatundu, north of Nairobi.

“Let us pull this country together and let us move forward as one nation.”

Opposition leader Odinga cast his ballot in the Nairobi slum of Kibera.

Speaking outside the voting centre, he told his supporters: “Let’s turn out in large numbers and vote.

“After finishing, in the evening, let’s meet at Uhuru Park [in Nairobi] and wait for the results.”

So far Kenya’s national elections have been going well, but the queues are long and the voters impatient.

Many arrived in the middle of the night to cast their ballots early and the electronic system is taking quite a while to verify voters.

If fingerprints don’t register, ID card numbers have to be typed in to the electronic tablets and then there’s a manual backup.

The responsibility lies with the Independent Electoral and Boundaries Commission to deliver a free and fair election.

The test will come when the polls close, the votes are counted and the results have to be transmitted to the tallying centres.

The presidential race is expected to be close.

Former US President Barack Obama, whose father was born in Kenya, also called for calm, telling Kenyans that the “choices you make in the coming days can either set Kenya back or bring it together”. — BBC.