How Kagame’s opponents failed to measure up on campaign trail 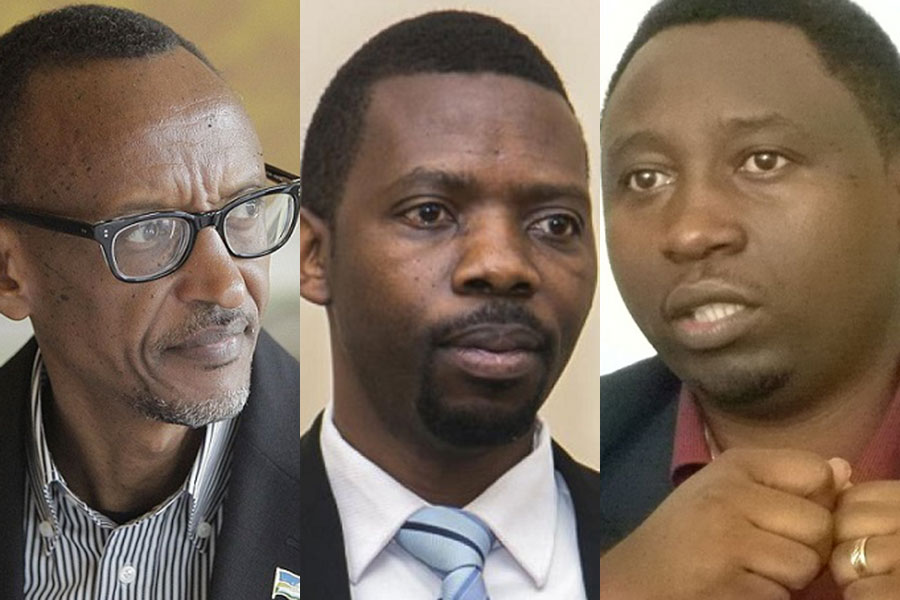 RWANDA—An estimated 6.8 million Rwandans go to poll Friday to decide on who of incumbent President Paul Kagame Frank Habineza and Philippe Mpayimana will lead the country for the next seven years.

But the voters hardly have a choice, not that Kagame, fronted by RPF-Inkotanyi and seven other opposition parties, has them at gunpoint—it’s all down to the calibre of the opponents challenging his grip on power.

Kagame is expected to ‘moonwalk’ through Friday’s vote in arguably the easiest election victories on a continent that is increasingly witnessing a rise in hard-nosed opposition figures challenging the plethora of leaders who continue to cling on to power beyond their constitutional mandate.

Frank Habineza, of the Democratic Green Party of Rwanda, and Philippe Mpayimana, an independent, are no Kizza Besigye or Raila Odinga in the regional mold of opposition. The two Rwandan excuse of challengers to Kagame certainly would do with a miracle to even qualify to clean the rims of Besigye’s spectacles during electioneering. If anyone suggested that Habineza would stand at the same lectern with Odinga to discuss politics, Mugabe and Museveni would probably stand down after a hearty laughter.

And it is no one’s making but their own.

Habineza and Mpayimana have spent the 20 days on campaign trail with manifestos that hardly appealed to the hearts of Rwandans, teetering between challenging policies and offering credible and better alternatives, making promises that felt too thin on paper to strike any chord with the target segment, among other messages they took to the electorate.

The two challengers have had some interesting tales when addressing electorate that their own task force would outnumber. Like turning up in the far-flung Gicumbi district in the northern swathes of the country and asking the voters to entrust them with their life because they will cut taxes and scrap VAT.

Sure, we all hate taxes. It’s every citizen’s dream to live a life without ever paying for even toilet tissues. But Gicumbi, aren’t they supposed to be farmers who will want to hear about modern farming, subsidies on farm implements, market for their produce and good road network to ease accessibility to the market?

The terrible ways to package message for target audience such as in the case of farmers would keep coming up as the two challengers inexplicably almost had very limited messages to sell to the electorate. Basically, what Habineza would tell Rubavu residents is what he would take to voters in Rusizi the following day and then to Kigali…

Mpayimana was no different. Pacing from door to door to literally ask voters to his rally was one thing, but what he would tell them is another altogether. Maybe if he had hit the right chords from Day One, he would have got the attention of the voters so that they at least throng his rallies to hear him out for the good messages even if he wouldn’t garner their approval.

Mpayimana said the biggest reform if he assumes government tomorrow will be in agriculture. And that is as far as it would go. In a world where climate change is a real threat, he either did not mention it and could not find a word for it in Kinyarwanda.

That prolonged droughts last year left the farming community in the eastern parts of the country needing relief from government to put a meal on their dining table was something that should have captured featured highly in the manifesto of a candidate who promises to reform agriculture, but there was hardly anything tangible in form of modernised agriculture and the transition from subsistence to commercial farming.

The two challengers should have come up with ideas of how they would best Kagame in providing irrigation technology for farmers to ensure food security, not just say their government would ensure the food security without telling the voters how.

Frank Habineza founded his Democratic Green Party of Rwanda in August 2009 in Rwanda as he targeted to challenge Kagame in the 2010 election. He was only 33. Seven years down the road and Habineza finally managed to have his face and name printed on the ballot paper. Probably that was his ultimate dream. Achieved and stamped.

That feat of appearing on the ballot paper must mean so much for Habineza, a man who has pledged to reverse the current government’s push to phase out used clothes and instead promote it for the “good of the millions of the peasants who cannot afford brand new garments.”

At the same time, Habineza intends to help local industries grow. Of course, the electorate are not that immature today. You can’t effectively promote used garments and at the same time promote local garments industries. It’s a tricky situation. One has to give. The voters put this directly to Habineza’s face and his mumbled response was that his government would find a way to strike the balance between the two.

For anyone to think of even dipping Kagame’s winning percentage from the 93 in 2010, they would have to offer Rwandans a lot of assurances that they will have effective policies to unite the people, further boost social protection programmes in place and promote self-reliance.

Short of praising government’s achievements at their rallies, the two challengers have hardly offered any supplements to the social protection programmes, not have they taken time to show how they will keep the ‘never again’ campaigning going, look into the issue of bringing the many perpetrators of the 1994 Genocide to book, among others.

Social protection programmes like ‘Girinka’ (where government gives a cow per poor family), and packages for widows of the genocide or ‘Hanga Umurimo’ (job creation) have greatly impacted lives. Widows and other genocide survivors have had houses constructed for them and continue to earn some stipends.

Habineza and Mpayimana dared not delve into the issues, probably with the hindsight that the voters consider it sensitive unless they had strong and convincing alternative offers on how to better such social programmes.

But when Mpayimana did look into social protection, he vowed that his government would slap a caveat on how many children each family can have. Three would be the maximum, whether you are richer than Sudhir or not. A weird pledge but were the voters even shocked?

At his best, Mpayimana told voters they will not be paying for water under his government because water is like air we breathe so it should be free as well. The sense is commendable but for a country where water taps even in the capital Kigali continue to be rationed despite consumers paying for it, one wonders how Mpayimana would effect such a policy.

The 47-year-old former journalist has been living in France and only recently returned to Rwanda. Until this year, Mpayimana’s brush with politics has more or less appeared to be in the spelling of the word. His arrival at electoral commission headquarters to pick nomination forms took many aback, with conclusions that a comedian had arrived.

The electioneering period would have probably had more drama had Diane Rwigara got her way around with the electoral commission. The 35-year-old would be another first-timer living a grand scale of a political dream, but she was already rattling feathers by the time her bid was snuffed up by the electoral commission, specifically in regards to calling for a democratic space where Rwandans are free to speak out their mind whenever they felt the need to question anything, including government policy.

Kagame has shaped his government and tailored a campaign message that promotes unity, self-reliance and pride in being what you are—as Rwandans. He has been heard explaining the reason he was “wasting resources” in an election he was guaranteed to win was to internalise with the people and find out what they want done in the next seven years.

To many Rwandans, he is the panacea of instilling belief in oneself as he never stops urging them to dream of making their own life, to think for themselves, to ignore the criticism across the borders and the seas and write their own stories, among others.

Kagame’s name will be appearing on the ballot paper for the third time after the Constitution was amended last year to lift a presidential term limit clause and allow him prolong his stay in power.

Polls opened Thursday in the Diaspora where the Rwandan community living abroad have been making their choices before the penultimate decision day on Friday.

That upsetting Kagame itself was too much for asking of Habineza and Mpayimana is a given, but that the two challengers could hardly put up a some message that the voters would return to bed to mull over is where the disappointment is.

Kagame has told the youth to think and dream big, including for the presidency, and that come 2024, Rwandans should think beyond him. But if Habineza and Mpayimana are the answer, the gains the country has made over the last 23 years and– the next seven– will be numbed.