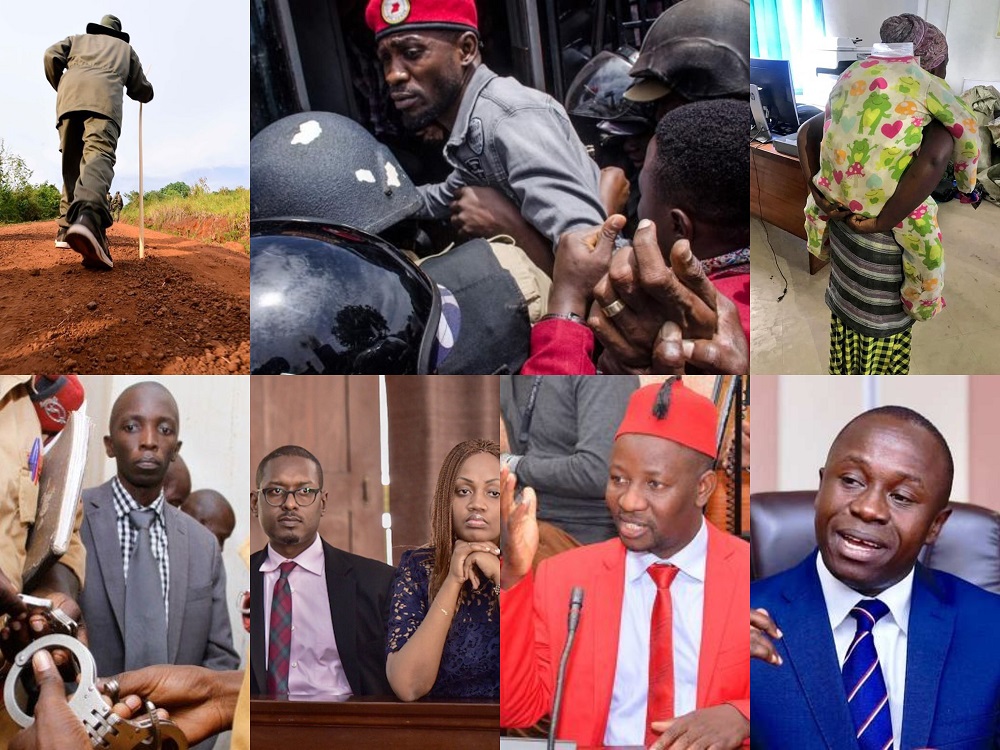 KAMPALA – The Spokesperson for Forum for Democratic Change (FDC), Ssemujju Nganda took a swipe at the Electoral Commission (EC) chairperson Justice Simon Byabakama for being extravagant.

Ssemujju made the remarks while addressing the press at the FDC headquarters in Nnajjanankumbi on January 6, 2020.

According to Ssemujju, the general elections, whose nominations and campaigns have been fixed for this year, will cost the country colossal sums of money.

Abala and Cyrus Aagon of Kumi Municipality were accused of fuelling resistance against the peaceful eviction of the people who encroached on 60 square kilometers of the Bokora- Matheneko wildlife reserve.

The team was led by Mityana MP Francis Zaake.

The legislator pleaded to Gulu District Police Commander Emmanuel Mafundo to allow them to hold the consultation but his attempt was futile.

KAMPALA – The Makindye based General Court Martial on Tuesday, January 7, 2020, released seven Rwandan nationals from Prison after the state dropped charges of unlawful possession of firearms, ammunition and military uniforms against them.

The group had appeared before a seven-member court chaired by Lt. Gen Andrew Gutti, however, prosecutors Lt. Col Raphael Mugisha and Capt. Ambrose Baguma tendered before court withdraw letters indicating that the state has lost interest in perusing the charges against them thus asking to set them free.

KAMPALA — The murder trial of ISO’s director son Brian Bagyenda flopped for the second day on Tuesday 7, 2020, after the two appointed court assessors failed to turn up in court for the hearing.

Court heard that the two assessors provided by court under criminal trials where just returning from Alur where they went to spend the festive season.

The presiding Judge Moses Kazibwe Kawumi, who was surprised said he could not go on which the hearing of the case without the assessors and he adjourned the case tomorrow.

Minister Ogwang speaks out amid question marks over his academic papers

Emmanuel Byamukama Tayebwa, a concerned citizen, through his lawyers of Mushabe Munungu & Co Advocates, on Monday filed a notice of intention to sue Ogwang, accusing him of lacking the requisite educational qualifications for a member of parliament.

KAMPALA – Uganda handed over to Rwanda seven of its nationals who were on Tuesday freed by the General Court Martial.

Kanyamunyu, his girlfriend Cynthia Munwangari and his elder brother Joseph Kanyamunyu are facing murder charges of shooting to death Kenneth Akena, a child rights activist near Kampala on November 12, 2016.

The meeting was due to take place at Grand Pacific Hotel in Lira Town. Despite Bobi Wine and the people power team led by Mityana Municipality MP Zaake Francis and Latif Sebaggala, the Kawempe North MP, saying that they had fulfilled the police guidelines, Lira DPC George Obia and Milton Odongo, the Lira RDC, insisted that it would not take place.

KASESE – Officials of the Uganda Revenue Authority (URA) at Mpondwe border post in Kasese were on Wednesday stunned after arresting a suspected smuggler carrying banned cosmetics disguised as a child on his back.

The female suspect was nabbed as she crossed to Uganda from DR Congo via a shallow point of River Rubiiha.

NAMIREMBE – A sex scandal engulfed Namirembe Anglican Diocese in Kampala after one of its priests, who was set to wed this week, was suspended for fathering a child with a choir member.

Rev Ronald Kalende, who serves at Mwererwe Church of Uganda, was given matching orders during a disciplinary meeting on Tuesday where he admitted to fathering a child with Peruth Serena Nabirye, a 23-year-old pianist.

SEMBABULE – Lwemiyaga cattle farmers threatened to storm Lwemiyaga cattle market to sell their cows in total violation of a ban that was imposed by the Government last year (2019) on grounds of the outbreak of foot and mouth disease within the region.

Led by Theodore Ssekikubo (Lwemiyaga County MP), the group while addressing journalists at Parliament accused General Elly Tumwine, Minister for Security of ordering for the closure of this market on allegation of foot and mouth disease yet the said disease is 36kilometers away from mitima village where the FMD has been detected.

KAMPALA – The government announced changes in the lower secondary education curriculum in which teaching subjects were reduced from 43 to 21.

The Chinese language was added to the menu of foreign languages while Kiswahili, Physical Education, and Entrepreneurship Education were made compulsory for learners in Senior one an two.

KAMPALA – The Judiciary top management directed disciplinary action against two Magistrates and five support staff following the recent investigations by the Judiciary Anti-Corruption Taskforce. The implicated staff (names withheld) are among those that appeared in last year’s media reports on corruption tendencies at selected courts arising out of investigations conducted by the Vision Group and the Democratic Governance Facility (DGF).

The Chief Justice, Bart M. Katureebe, said the Judiciary Top Management had reviewed the Report of the Taskforce in December 2019 and directed the Chief Registrar to charge the two implicated Magistrates and refer them to the Judiciary Disciplinary Committee.

BIREEMBO — President Yoweri Kaguta Museveni in a company of Bazzukulu and Bush War historical on Thursday arrived at Birembo—bringing his symbolic trek to an end.