The week ending November 3 has been action-packed. From the brutality of Makerere University protesting students by the army to Rwanda’s Paul Kagame’s remarks about a ‘neighboring country suffering social unrest because of corruption, we review some of the events that have raised eyebrows in the country. 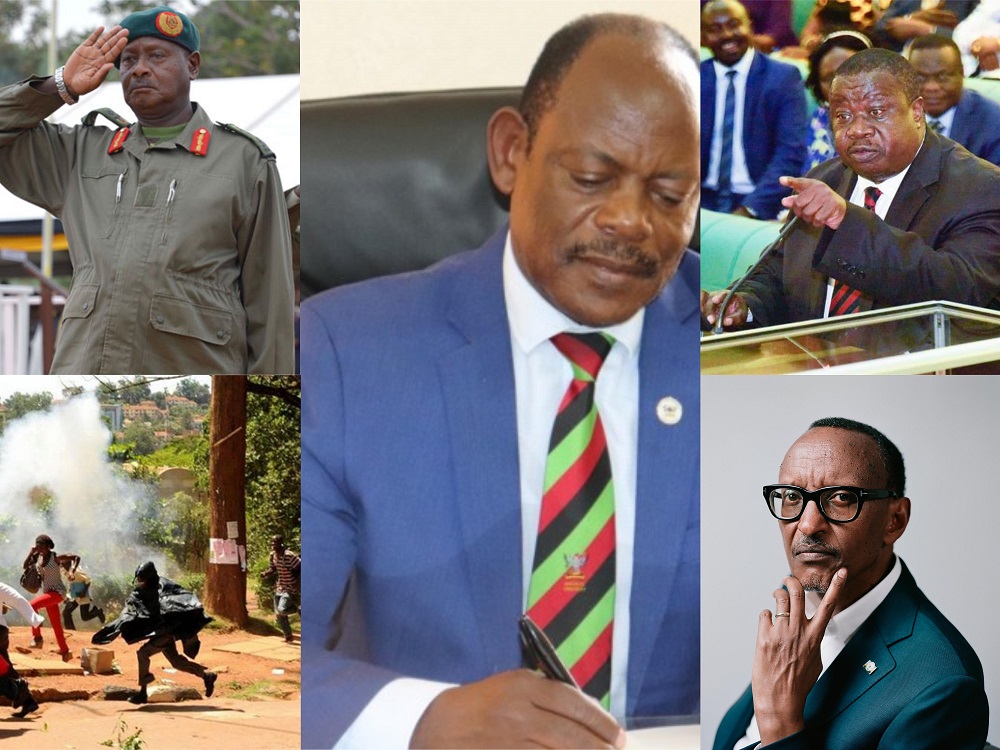 On Tuesday, it emerged that President Museveni had ordered the withdrawal of the military police from Makerere University following reports that the men in blue had been brutalizing journalists and protesting students. The president’s directive was confirmed by his Senior Press Secretary, Mr Don Wanyama.

“President Yoweri Museveni has urged stakeholders in Makerere to talk and resolve all issues around fees. He’s spoken to council chair and the guild president today, urging them to meet. He’s ordered the withdrawal of the military police from the university,” Mr Wanyama tweeted on Tuesday, October 29, 2019.

He added that the President had directed the police will maintain order at the university that has for the last eight days been plagued by protests over the new 15% tuition fees increment policy.

The move came a day after the US embassy said the Kampala government’s use of the military to quell the protests at the university is uncalled for and contradicts the rights to free expression as enshrined in Uganda’s constitution.

“The U.S. Mission in Uganda is increasingly concerned about the violence at Makerere University in response to ongoing protests against the proposed tuition increases. Footage of security services attacking unarmed students in their residence halls and attacks on journalists covering the protests are especially disturbing,” the statement issued on October 28, 2019 reads in part.

“This heavy-handed response by security services is uncalled for, and is a direct affront to the freedoms of assembly, speech and expression guaranteed by Uganda’s constitution. We urge the Government of Uganda to allow all Ugandans to exercise their basic rights peacefully and without fear,” the statement adds.

Amid all this, Makerere University Council agreed to make adjustments in the implementation of the 15 percent cumulative tuition policy in a bid to resolve a students’ protest that had paralysed business at the institution for more than a week.

In an emergency meeting held with student leaders on Tuesday, the university council resolved to scrap the 15 percent increment from functional fees for the next three years.

“The 15 percent adjustment in fees shall not apply to functional fees for the remaining period of implementation of fees structure adopted in July 2018. Functional fees shall be capped at the rate applied on the admission cohort for 2019/2020 academic year for the next three years,” reads part of the statement signed by the council chairperson Ms Lorna Magara and the council secretary Mr Yufuf Kiranda.

However, the university council maintained that the 15 percent fees adjustment shall continue to be applied on tuition fees for the remaining period of three years.

Justifying the fees adjustments, the university council noted that it was conscious of the financial requirements to run the university alongside the economic circumstances in the country.
Further, the council said Makerere had not increased fees for 13 years before the current fees structure was passed.

The council also ordered for investigations into alleged involvement of two top university officials; Gordon Murangira, the Personal Assistant to the Vice Chancellor and Prof. Eria Hisali, the Principal of College of Business and Management Sciences, in sanctioning military raids and brutalization of students at the institution.

However, the university council maintained that the 15 percent fees adjustment shall continue to be applied on tuition fees for the remaining period of three years.

Amidst the Makerere tensions, artiste Eddy Kenzo addressed a press conference and revealed that he will not campaign for any political party, including fellow singer-turned politician Robert Kyagulanyi aka Bobi Wine.

Kenzo was on the campaign trails of President Museveni in 2011 and Bobi Wine in 2016 but addressing a press conference in Kampala on Thursday, October 31, 2019, he said that he has resolved to opt out of politics.

“I campaigned for him (Bobi Wine) in Kyadondo but for president, I won’t. He must convince people he is the best. I will not campaign for any other person. I am a person who must bring together people.”

With the Makerere riots in full swing, two journalists of Nation Media Group – Uganda were hospitalized after they were injured as security agencies quelled the protest at the university on Wednesday, October 30, 2019.

NTV Uganda photo journalist Geoffrey Twesigye and Daily Monitor’s Alex Esagala were admitted to International Hospital Kampala after a teargas canister thrown by police exploded before them. The journalists were also beaten up by security agencies.

KFM’s Stephen Mbidde and others of NBS TV was also beaten in the protest.

In a statement, the Uganda Editors’ Guild, in a statement issued on Thursday, October 31, 2019, said journalists are mandated to cover the protests as enshrined in the Ugandan Constitution and the security agencies should respect their work.

“The Uganda Editors’ Guild expresses concern and condemns in the strongest terms possible the attacks and restrictions on journalists covering the on-going fees strike at Makerere University,” the statement issued by Mr Daniel K. Kalinaki, the interim chairman of the Uganda Editors’ Guild, and Ms Sylvia Nankya, the Interim Secretary, reads in part.

On a regional scene, Rwanda President Paul Kagame said a particular neighbouring country is facing increasing social unrest because its ruling government has exploited people for a long time.

Without giving a name, Mr Kagame said in that neighbouring country, 1% of the population controls 100% of the country’s resources, leaving others to suffer.

“Countries I mentioned with problems is because they never cared for the people. It’s that burden they are struggling with. They are paying accumulated debt… Those demonstrations you are seeing is about people saying ‘. Hmm you lied to us. From the beginning, we supported you, we followed you and afterwards you abandoned us and took all the country’s resources,’” Mr Kagame said

“In that neighboring country, 1% of the population controls 99% of the population politically. Then 1% controls 100% percent of the resources and the rest follow. The demonstrators you see are people demanding what is theirs. They are saying you cheated us. Those people are used like one would use a motorbike to reach your destination. Now people are saying we refuse to carry you on our backs. You take everything and leave nothing to us,” he added.

The Rwanda president was presiding over the closing ceremony of the 12th annual forum of Unity Club Intwararumuri, an association of current and former cabinet ministers and their spouses, in Kigali last week.

It is not immediately clear what country he was referring to. However, given the past diplomatic standoffs between Uganda and Rwanda, it is believed that Mr Kagame was referring to the former.

Currently, Uganda is struggling to suppress a protest at Makerere University, which was prompted by the 15% tuition fees increment policy.

Away from the chaos at Makerere, President Museveni Uurged African judges to address the causes of injustices and human rights abuses that are deeply rooted in the social, economic and cultural set up of the African society.

Speaking during the 4th judicial officers’ dialogue organised by the African Court on Human and Peoples’ Rights in Kampala on Wednesday, October 30, 2019, Mr Museveni said most causes of human rights abuses are not of legal nature hence cannot be addressed by mere legislation.

“For me, I think it’s a good chance for you (African Chief Justices) to see how we apply our original traditional justice towards the struggle for human rights and also enhance harmony in society,” Mr Museveni told the 20 Chief Justices from across African judiciaries.

The President said there are fundamental human rights such as the right of access to food, shelter, clean water, clothing, education and health, which cannot be addressed legally but rather by developing the economy to enable the state to support her citizens.

“Man has not only been abused by fellow man. He has also been abused by nature such as floods, drought, diseases, famine, and earthquakes, among others. These can only be addressed by development solutions and not by legislation,” he said.

Mr Museveni called upon the justices to always priotise the hearing of cases that will bring about economic development rather than hearing cases like assult.

“I usually talk with their lordships in Uganda and their issue is case backlog but if I am faced with a case of people who fought in a bar and another involving a factory, I would deal with that of the factory since it employs many people, pays taxes to government instead of that of people who fought,” the President said.

He also re-echoed the need to hang those who have murdered others in cold blood instead of handing them jail sentences.

The Minister of Justice and Constitutional Affairs, Maj Gen Kahinda Otafiire, on Wednesday shocked members of Parliament when he revealed that he is taking government to court for grabbing his land on which Njeru Stock Farm sits in Buikwe District.

The land in question is under the management of the National Animal Genetic Resource Centre and Databank, which is tasked with scientific animal breeding.

Gen Otafiire is accused of grabbing the land using cronies such as one Muhangi but government has since reclaimed it.

During plenary on Wednesday, Speaker of Parliament Rebecca Kadaga asked the minister to explain circumstances under which he came to take possession of the land.

“We shall want to know the relationship between Muhangi and Otafiire now he has taken over a government firm. I direct the Minister of Internal Affairs to investigate this issue, who is Muhangi, how did he take over government lands?”

Otafiire confirmed his interest in the contested land and told Parliament that he had instructed his lawyers to take government to court for taking over his land.

In response, Ms Kadaga called out what she called impunity in government and asked him to table documents showing how he came to own government land.

However, the minister insisted that he was exonerated by the Inspector General of Government, Justice Catherine Bamugemereire Land Commission and that the matter is in court and he wasn’t at liberty to discuss the matter at Parliament.

In response, Budadiri West MP Nandala Mafabi wondered how Otafiire could drag the same government he serves to court.

“He wants to throw government off his land and the government he is throwing off he is serving as a Minister. This is arrogance that the whole minister supposed to protect public property is now taking over public property. Wouldn’t it be procedurally right?” he said.

Buhweju County MP Francis Mwijukye said Otafiire has for long been cited in cases of land grabbing and is now using his office in Justice to formalize his deals from Ministry of Lands.

Oulanyah to chair first Parliament session in a year