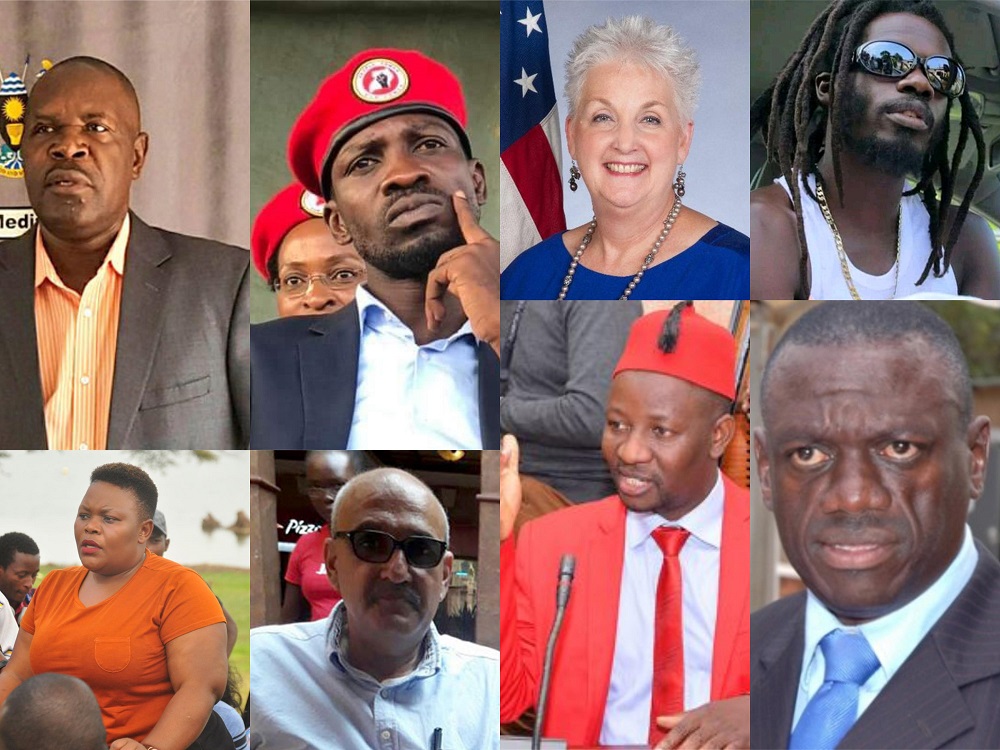 A few other anomalies were cited on the Uganda National Examinations Board register and cases of missing students.

KAMPALA —Mubende residents envisaged some light at the end of the tunnel after Land Probe report recommended that the Director of Public Prosecution (DPP) reopens and thoroughly investigate businessmen Abid Alam over massive land fraud and inciting violence, murder among other heinous crimes.

The DPP had in November 2018 dropped murder charges against the businessman claiming that the witnesses to the alleged crimes gave police conflicting accounts, a move that was contested by residents and local NGOs, including the Witnessradio.org.

Boston Mayor promises US support for Bobi Wine in 2021

Bobi Wine, real name, Robert Kyagulanyi, was in Boston on for a fundraising dinner organised by his supporters.

Ms McCarthy lauded Bobi Wine for having courage to challenge the status quo.

KAMPALA – The Forum for Democratic Change (FDC) party summoned an emergency National Executive Committee (NEC) meeting to decide the next course of action following what they described as rising cases of brutality by police against the opposition party.

KAMPALA – The Public Accounts Committee (PAC) ordered Judiciary to table all reconciled bank statements of all activities undertook in the 2016/17 and 2017/18 financial years after more rot was discovered on the institution’s expenditure.

The directive followed the failure of the Judiciary to furnish Parliament with all the UGX32Bn accountability under the watch of embattled former Secretary to Judiciary, Kagole Kivumbi who had told lawmakers that most of the money was sent to courts and judges to undertake their judicial work.

The ruling party MPs reached the decision during a party caucus meeting chaired by President Museveni at State House Entebbe on Monday evening.

KAMPALA – A police drone hovered over Plot 6, Katonga Road, Nakasero in Kampala city as opposition leaders led by Dr Kizza Besigye launch the signing of the petition to the International Crimes Court (ICC).

The leaders seek to raise two million signatures to cause an ICC Investigation, trial and indictment of President Yoweri Museveni and other government offices for what the group claims are serious crimes and crimes against humanity as opposition leaders.

KAMPALA – The Uganda National Examinations Body (UNEB) intervened in a matter where 15 candidates at Top Care Secondary School in Iganga District were barred by the school authorities from sitting for Uganda Advanced Certificate of Education (UACE) over school balances.

Despite pleas from the students, their parents and eventually area leaders, the school refused to relent and let the students sit the examinations.

But on Tuesday, the commissioner in charge of private schools at UNEB, Mr George Mutekanga pitched camp at the school to ensure that the affected students sit for their final papers.

KAMPALA – Makerere University Vice-Chancellor Prof. Barnabas Nawangwe in trouble after a group of students petitioned court seeking to challenge the legality of the University Students’ Regulations Statutory instrument passed in 2015.

In their petition filed before the High Court Civil Division, the students led by their guild Vice President Judith Nalukwago contend that their rights to attain a meaningful and wholesome Education are suffocated by the unfair administrative and regulatory sanctions imposed by prof. Nawangwe.

RUKIIGA – Drama ensued on Tuesday when bodies of the Ugandan businessmen who were shot dead in Rwanda were handed over without post-mortem reports in Kamwezi Sub County in Rukiga district.

John Bosco Tuhirirwe and Job Ebyarishaga, both residents of Kamwezi Sub-county were killed by Rwandan security at Tabarwe in Nyagatare District in the wee hours of Sunday, about 200 meters from the Ugandan border for allegedly smuggling tobacco.

The Uganda National Roads Authority (UNRA) said Kazinga Channel Bridge, which connects greater Bushenyi districts to Kasese on Lakes George and Edward, was damaged, meaning that traffic on the road was diverted to Fort Portal—Kasese—Mpondwe route.

KAMPALA – The US Embassy in Uganda dismissed as fake news reports that it detained Uganda government spokesperson Ofwono Opondo.

In a statement issued on their social media platforms on Tuesday, the US Mission in Uganda said Mr Opondo did even not appear at the embassy.

KAMPALA – Uganda warned Rwanda against continued border aggression and demanded a joint investigation into the murder of two Ugandan traders by Rwandan security forces on Sunday.

On Tuesday, Amb Patrick Mugoya, permanent secretary at the Ministry of Foreign Affairs, delivered Uganda’s strong concerns to Rwanda’s High Commissioner, Amb Frank Mugambagye, in Kampala, demanding that perpetrators of the killings at the border be held responsible.

Ofwono Opondo, the government spokesperson, said in a statement released Tuesday evening that Uganda conveyed serious concern regarding an incident of murder of Ugandan nationals that occurred on Rwandan territory.

MOROTO – A police constable attached to Nakilora police post in Rupa Sub-County in Moroto district committed suicide after noticing that he was HIV/Aids positive.

Mr. Nasucha suspected that Opio ended his life due to a lot of stress caused by death of his wife and also when he learnt that he was to live with the HIV/Aids for the entire of his life.

KAABONG – A total of 50 gold miners of Rwandan nationality were expelled from the gold mining area in Lopedo village, Kapedo sub-county in Kaabong district in Karamoja region.

They were chased on Tuesday 12 by the Kaabong Deputy Resident District Commissioner Mr. Augustine Modo after they failed to produce mining documents and documentation of how they have been paying royalties to government and the sub-county.

Speaking to PML Daily on Wednesday 13, Mr. Modo said the mining site had started harbouring criminals since his office has started receiving a lot of complaints of harassments and child labour from the community.

KAMPALA – President Museveni on Tuesday met NRM Kampala leaders in a bid to diffuse growing tensions over claims that they were being sidelined by the party leadership in the face of appointing artiste Catherine Kusasira as presidential special advisor for Kampala.

The meeting took place at State House Entebbe and was attended by, among others, Mr Salim Uhuru, Mr Godfrey Nyakana and Kampala Affairs minister Beti Kamya. Ms Kusasira, however, did not attend the meeting as she was heading to the US.

The Minister made the remarks on Wednesday during a media breakfast at Imperial Royal Hotel ahead of the celebrations to mark 20 years of the East African Community.

Kivejinja defended his position arguing that the community is optimistic that mutual talks between Uganda and Rwanda can help to end the tensions and fully revive cross border trade.

The complaint was lodged at the Torture Abolition and Survivors Support Coalition (TASSC) international in Washington DC on November 13.

KAMPALA – The tenure of the United States of America (USA) Ambassador to Uganda, Deborah Malac came to an end with President Donald Trump announcing her replacement.

A September 2019 statement on the US Department of State announced that Natalie Brown, a career member of the Senior Foreign Service, Class of Counselor, who has also served as the Chief of Mission of the U.S. Embassy in Asmara, Eritrea, since 2016, will be Ambassador Malac’s replacement.

KAMPALA/WASHINGTON D.C – Natalie E. Brown, the Chief of Mission at the US Embassy in Eritrea, set to replace Deborah Malac as the country’s ambassador to Uganda.

The tenure of Ms Malac, who served as US Ambassador to Uganda since 2015, came to end and on Wednesday, she visited Speaker of Parliament Rebecca Kadaga to say her farewell.

KIGALI – Rwanda President Paul Kagame said his government would do all it takes to protect his country from what he described as enemies hiding behind democracy and freedom of speech with the main objective of destabilizing the nation.

Speaking at the swearing-in ceremony of new army chiefs and ministers in Kigali on Thursday, November 14, 2019, Mr Kagame said they have shed blood to protect the country and are not ready to tolerate those seeking to cause anarchy.