KAMPALA –  Dr. Charles Lagu, the interdicted Executive Director of the Entebbe-based National Animal Genetics Resources Centre & Data Bank (NAGRC & DB), was thrown out of the organisation amid charges before the anti-corruption court because the man was incorruptible and principled, new information has revealed.

This is why when he was arrested and detained over alleged corruption, many people were shocked since Dr  Lagu had been at the forefront of the fight against graft in the organisation.

More shocking was the disgraceful manner in which he was arrested. His home was first surrounded by security personnel the whole night before he was later taken in.

This website has however established that his woes started after he forced some powerful people off government land.

Dr. Lagu himself said moments after his arrest: “When you do a good job, you become a problem (to some people). We have dealt with encroachers, land grabbers and so many people. They could be behind all this”.

PML Daily has now learnt that one of the planners of Dr Lagu’s arrest and eventual interdiction was Dr. Anthony Ntaate who was interestingly appointed to replace Dr Lagu.

According to an earlier whistleblower letter, Dr. Ntaate used his earlier position as Deputy production manager and chairperson contracts committee to entrench nepotism in NAGRC & DB.

According to the letter dated February 13 2020, the whistleblower points to the recruitment and outsourcing of two companies owned by Dr Ntaate’s blood brothers. The companies include Cardino Partners Consult Ltd and Balix Imports & Exports Ltd.

The whistleblower gives details of ownership and the nature of connivance that Dr. Ntaate allegedly involved himself in with his relatives.

“The above two companies belong to the family of Joseph Balironda who is a blood brother to the chairperson contracts committee (Dr Ntaate),” says the whistleblower in his letter to Dr Lagu during his time as the ED, Nagrc & DB.

The whistleblower letter is copied to the board chairman of Nagrc & DB, and notes that should nothing be done, he would go ahead and petition the IGG.

However, no sooner had Dr Lagu swung into action to call Dr. Ntaate to order than his woes deepened as he was arrested, detained and arraigned in court.

A section of MPs have since come out to protest that Dr. Lagu is being victimized by government officials who are interested in grabbing NAGRIC property.

MPs led by Ayivu County legislator Benard Atiku questioned the manner in which Lagu was arrested. 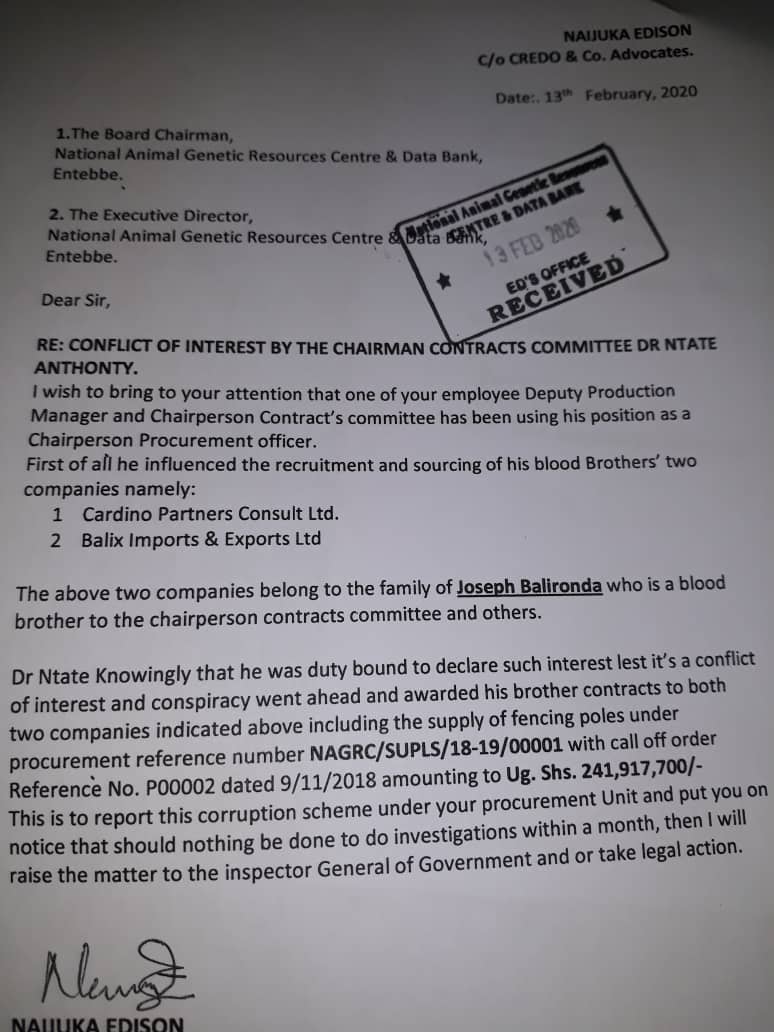 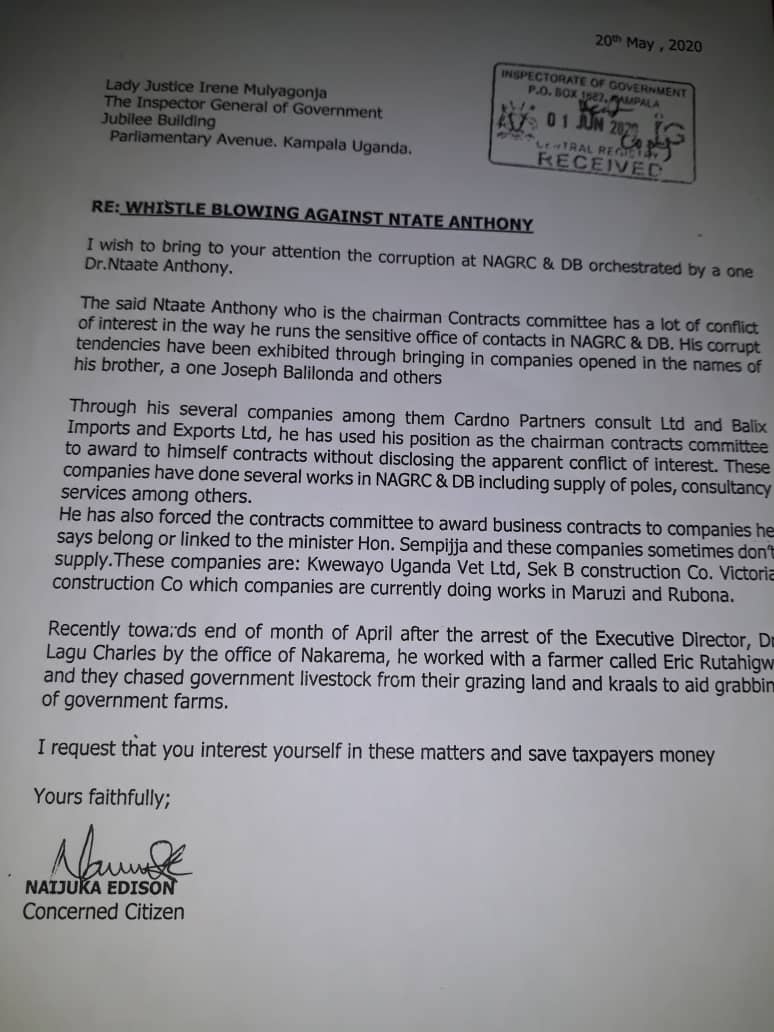 Mr. Atiku says that Dr. Lagu’s arrest is a case of witch-hunt and backed with secret motives since he had already complained and reported to police about people harassing and seeking to extort money from him.

He noted that the State House Anti-Corruption Unit was being misused by complainants who also need to be investigated in order to dig out the truth about the operations of NAGRC.

The whistleblower has since proceed to petition the IGG’s office after the arrest of Dr. Lagu.

In the letter to the IGG, the whistleblower explained the systematic nepotism and corruption exhibited by Dr Ntaate before he connived with Lt Col Edith Nakalema to have Dr Lagu arrested, jailed and sacked.

“Recently, towards the end of April after the arrest of Dr Lagu by the office of Nakalema, he (Dr Ntaate) worked with a farmer called Eric Rutahigwa and they chased government livestock from their grazing land and to aid grabbing of government farms,” said the whistleblower.

President Museveni and the Speaker of Parliament Rebecca Kadaga have since vowed to review circumstances under which Dr. Lagu was arrested and arraigned before court.