DR CONGO – Virunga National Park was declared a UNESCO World Heritage site in 1979 but was labeled a site in danger in 1994 due to political conflict and poaching.

Virunga National Park is a 7800 square kilometer World Heritage Site that lies on the eastern border of the Democratic Republic of Congo, where it borders Uganda as well as Rwanda.

It is the oldest national park in Africa and the second oldest in the world (after Yellowstone). It is named after the Virunga Mountain (volcanoes) range that lies in the south of the park. The park, however, is much larger and stretches all the way north to envelop Lake Edward as well as the Rwenzori Mountains.

Virunga National Park is located in a region that is often troubled by unrest. In the last three years, the southern sector of Virunga National Park (gorillas and volcano) has been considered safe for visitors with over a 100 tourists visiting these sites every month. The Rwenzori Mountains are also open for tourists and can be reached from Beni in the North of the park. The park comprises an outstanding diversity of habitats, ranging from swamps and steppes to the snowfields of Rwenzori at an altitude of over 5,000 m, and from lava plains to the savannahs on the slopes of volcanoes. Mountain gorillas are found in the park, some 20,000 hippopotamuses live in the rivers and birds from Siberia spend the winter there.

It has got more than its share of wonderful wildlife – not just huge numbers of unique birds, but African icons like lions, elephants, hippos, chimps, and the remarkable okapi. And a quarter of the world’s critically endangered mountain gorillas. The park boasts astounding biodiversity due to the large variety of habitats it offers.

In the Southern Sector, Primate Safaris such as Mountain Gorilla Trekking attract the most attention but the montane forests are also home to other primates such as Chimpanzees, Golden monkeys, Blue monkeys, and black and white colobus.

Forest Elephants and Buffalo are also found in this area as is the very shy Golden Cat. Some of the largest wild animal concentrations in Africa occur along the rivers of the park. Mammals in the savannah of the Rwindi area include elephant, hippopotamus, buffalo, numerous antelope including kob, defassa waterbuck and topi, warthog, lion and various monkeys. Large numbers of pelicans occur on the lower Rutshuru. In the Semiliki Valley and on the slopes of the Virunga mountains are gorilla, chimpanzee, and okapi. In the extreme north are forest hog and bongo. Birds include Nahan’s francolin, forest ground thrush, shoebill and probably papyrus yellow warbler.

The central area of the park consists mostly of Savannah with species such as Lion, Leopard, Kob, Hyena, Topi, warthog etc. The lake, once containing the largest population of Hippo’s (over 20.000), is now slowly regenerating after many troubled years. Hippos and Crocodiles are once again a common sight.

The southern sector (Gorillas and Volcano) of Virunga National Park is easily accessible in a number of different ways the most common are: Overland via Uganda, cross the border in Bunagana, from where the Mountain gorilla sites Jomba and Bikenge are easily accessible within 1 hour. The border crossing is easy, and a local visa can be bought at the border for only 50$, however, this visa is not a fully recognized visa and can only be used to visit the park and subsequently leaving the country at the Bunagana border post again. Overland via Rwanda, cross the border at Gisenyi/Goma, the border.

Before visiting the gorillas, a guided hike up into the mountains for a day is good for acclimatization. It also allows you to spend more time looking at the other wildlife in the forest, and getting a better understanding of the overall ecosystem. A more gentle option is a guided trip to a troupe of habituated golden monkeys, which tend to inhabit the bamboo forests, on the lower slopes. You won’t normally get as near to the monkeys as you would to the gorillas, but the environment is interesting and with patience, you’ll still get quite close.

Climbing is one of the activities carried out in the virunga national park. For example the Lava Lake of the Nyiragongo Volcano, the largest in the world. This volcano, famous for its lava lake, is a technically easy climb from the direction of Goma. A trip to the top should take 6 hours; most climbers spend the night at the top. This also makes it possible to see the boiling lava by night, when it becomes even brighter. 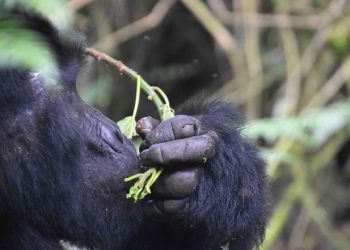