It is exactly there years since the musical  Mayanja family lost their youngest brother Emmanuel Mayanja Mulindwa, who.was commonly as AK47.

Jose Chameleone and Weasel, some of the brothers went to Mityana today where he was laid to rest to ‘check’ on him as they put it on their social media platforms. They were in company of Chameleon’s sons, Alpha and Abba Mayanja.

“Every hard experience in life builds the strongest of us. It’s only exactly three years today, That we lost a friend and brother AK47. Before all tears dried up another was gone. But with the invisible Faith we hold at heart we know our prayers opened the heavens Gates for our loved ones.Me and the entire Mayanja Family are in unison prayer for Ak47 as it’s exactly 3 years since he departed. Rest In Peace AK and Radio. One day we will meet again,” Chameleone wrote on his facebook timeline.

Pallaso, also a brother, who is said to have been closest to Ak took to his Facebook page to remember his brother by saying no amount of money can take away the pain he feels for having lost Ak. “It is years but I still feel the pain whenever I look in the mirror, my gun was taken away,” he said.

Pallaso is currently in Australia where he set to perform.

Other celebrities like Sheebah, Fille, Lydia Jasmine, Kabako, among others also took to social media to remember the late Ak.

Ak passed away three years ago after being involved in a bar brawl at a local pub called Dejavu in Kansanga, a Kampala surburb. 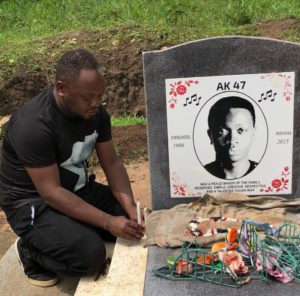