Nkumba Media Lab Entebbe has issued a warning to the Bunkenke singer about an intention to sue him for a footage he used in his new trending ‘Mzee Akalulu’song.

Through their lawyers (Walusimbi & Co Advocates), they opine that the song, which was recently unveiled as President Museveni’s official campaign song features their footage from the recently commissioned Kitooro Market.

“You infringed on our client’s copyright on 30th October 2020 or thereabouts when you used our client’s images, footage, and other artistic work depicting the recently commissioned Kitooro market at Entebbe in the trending video of your campaign song titled “Mzee” without our client’s consent,” reads part of the notice of intentions to sue.

They further demanded that the artist ceases and desists from further copyright infringement by immediately pulling down the video containing the infringements complained of from You Tube.

They also demand an apology and compensation of Ugx375, 000,000 within one week from the date of receipt of the letter.

“Our client hereby demands that you desist from further copyright infringement by immediately pulling down the video containing the infringements complained of.” The letter reads. 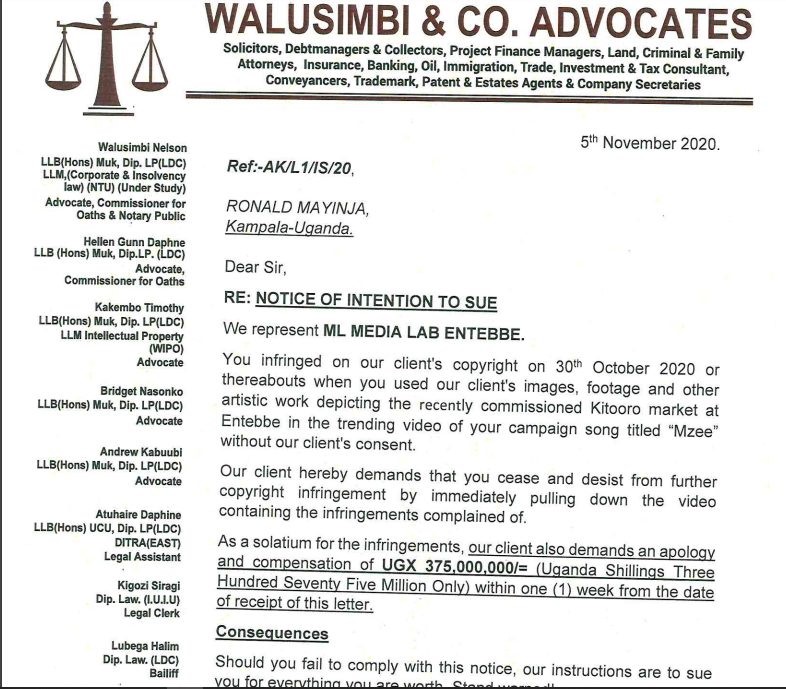 The letter also stated that should Mayinja fail to comply with this notice, the lawyers have instructions to sue him for everything.

‘Akalulu Kako Muzeeyi’ is barely two weeks on the airwaves but it has managed to get Mayinja the attention he perhaps last received when he released songs like ‘Tulikubunkenke’ and ‘Africa’ among others. The circumstances under which the song came about are what has made it popular but the artist is in trouble over it.

The song has also been the center of public scrutiny since the singer left the Naional Unity Platform and joined the NRM to record it. Before he did the song, he had also recorded one dubbed ‘Batitiizi’ for the NUP principal urging him to remain strong amidst the humiliations he was set to face in ‘the struggle.’

Singer Moses Ssali alias Bebe Cool had also comeout earlier to castigate the bigwigs of NRM for fronting Mayinja’s song over his.

OPINION! Is the Kabaka sick? 66th birthday celebrated amidst mixed emotions from his subjects