Meet Corporal Kyasiimire, a dedicated female peacekeeper with passion to contribute to peace and stability in Somalia

MOGADISHU – When Corporal Emilly Kyasiimire was deployed to Somalia in December 2018 to serve as an African Union peacekeeper, her first task was to undertake a mandatory drivers’ test to allow her to drive an ambulance, says African Union Mission in Somalia (AMISOM).

“Naturally I enjoy driving so I was happy to drive an ambulance,” says the 35-year-old female peacekeeper from the Uganda People’s Defence Force (UPDF).

All soldiers who want to drive in Somalia must pass the mandatory driving test to be allowed to handle military vehicles.

“I am happy that I passed the driving test and I am now using my skills to save lives. It is fulfilling,” she added while dusting her four-wheel Toyota Land Cruiser ambulance.

Corporal Kyasiimire developed an interest in humanitarian work while working as a records clerk in the Special Forces Command in her home country, Uganda.

Since her deployment to Somalia, the female peacekeeper has been picking up injured soldiers and civilians evacuated from various parts of the country, and in need of urgent medical care, transporting them to the African Union Mission in Somalia (AMISOM) Level II Hospital.

In a conflict environment where the number of casualties arising from security-related incidents is high, an ambulance driver plays a critical role as his or her actions can to some extent determine the survival of the injured.

Corporal Kyasiimire is well aware that time is of essence and the injured must be rushed to hospital within the shortest time possible.

“I feel very useful for evacuating patients, especially those in critical condition. When I am able to get them to the hospital for treatment within the shortest possible time and I later see them fully recovered, I feel a sense of pride,” she observed.

The UPDF soldier is oftentimes found seated in the cabin of her ambulance or beside it, ready to respond to emergencies. She is on call 24 hours a day, which to her is both a blessing and a challenge.

“One of the challenges I face is that as an ambulance driver, I am always on standby 24-hours a day, which is good because I am saving lives. I also don’t always work within the AMISOM base camp. Sometimes I drive outside the protected areas to pick up injured soldiers and civilians across Mogadishu,” said the 35-year-old.

Corporal Kyasiimire recounts one of her moments of pride involving a pregnant woman who had fallen sick outside the protected area.

“I remember one afternoon where I had to rush a pregnant Somali woman who had developed serious complications to the hospital. The patient was very sick and would have died due to complications. I had to rush her to hospital in the shortest time possible while at the same time assuring her that she will be alright.

“I followed up later and learned that she survived and had given birth to a healthy baby. It was fulfilling to save a life,” explains the UPDF soldier.

The quick emergency response was crucial because Somalia is one of the countries with the highest maternal deaths in the world. In fact, the United Nations Children’s Fund estimates that one out of every 12 women dies due to pregnancy-related causes.

“Being a woman and well aware of the dangers of pregnancy complications especially in a country still recovering from conflict I had to act fast to save her life and I am glad it went well,” she explained.

Corporal Kyasiimire is one of the many female peacekeepers serving in AMISOM who are making positive contributions towards peace and security in Somalia.

Over the years AMISOM has been lobbying for more female peacekeepers to underpin the important role women play in peacebuilding, and to serve as champions in protecting women’s rights in Somalia.

In fact, this year’s World Humanitarian Day is dedicated to women humanitarians like Kyasiimire and many others who are working hard to make the world a better place.

Though the provision of humanitarian services is not a core mandate of AMISOM, the AU Mission has worked tirelessly to provide a conducive environment for the delivery of humanitarian assistance.

Brig. Gen. Michael Kabango is no stranger to Somalia, having served in various capacities prior to taking over as the UPDF Contingent Commander in December 2018. According to him, the humanitarian situation in Somalia has seen remarkable changes since AMISOM arrived in Somalia in 2007.

“When AMISOM first arrived the humanitarian situation was difficult. There was insecurity and there were no hospitals. Mogadishu as the capital of Somalia was isolated from the rest of the country. The only functional hospital became the AMISOM Level II hospital here at the Airport,” recalled Brig. Gen. Kabango who served as Uganda’s Deputy Contingent Commander in charge of Operations in 2008/2009. 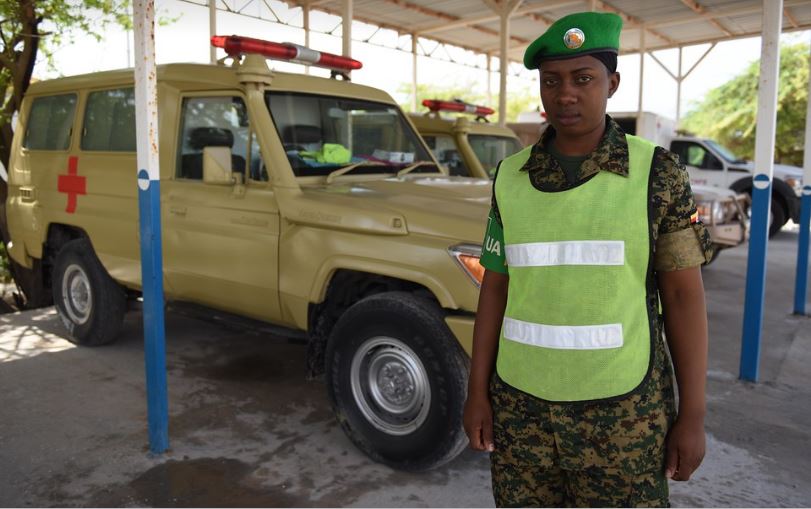 Kabango cites the expulsion of the militant group Al-Shabaab from Mogadishu in 2011 and the eventual opening up of key Main Supply Routes (MSRs) as the game-changer that improved the humanitarian situation in Somalia.

Apart from degrading Al-Shabaab and opening MSRs, AMISOM troops, also provide security escorts to humanitarian vehicles delivering food and non-food items to the needy in various parts of the country.

In addition, the AU Mission continues to implement programmes aimed at improving the lives of residents who have suffered due to conflict and instability. The programmes include free medical camps, food donations, sinking of boreholes, construction of police stations and schools and the rehabilitation of roads among others.

“We need to make sure that local communities cooperate with us and we can do this by demonstrating to them that we understand their needs,” Gen. Kabango explains.

“The task is a service for humanity and we do it to save lives,” he added in reference to the mammoth task of securing Somalia.

Corporal Kyasiimire concurs with her commander’s sentiments, promising to continue engaging in humanitarian work even after completing her tour of duty in Somalia.