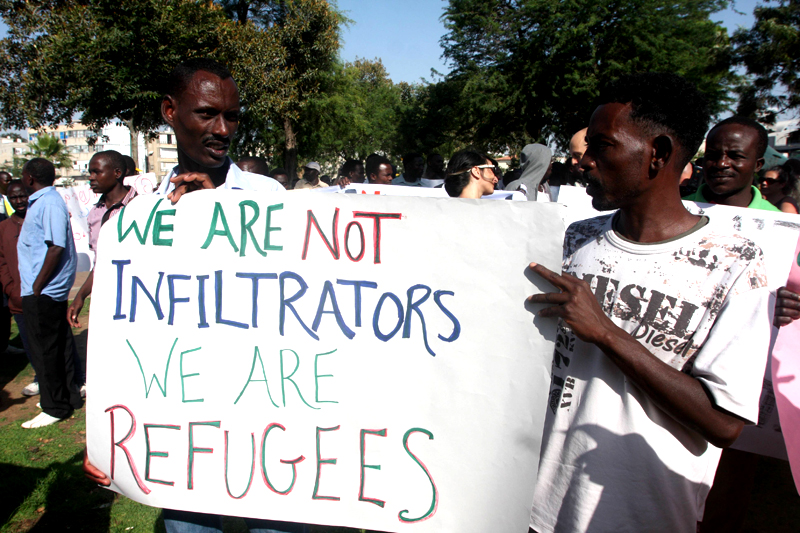 African asylum seekers began crossing Israel’s border with the Egyptian Sinai Peninsula more than a decade ago many having survived human smugglers and harsh desert conditions.

At first, some of the arrivals – who now number around 40,000 and are mostly from Sudan and Eritrea – were granted temporary residency. But even though Israel is a signatory to the 1951 Refugee Convention (and once took in several hundred Vietnamese “boat people” in the late 1970s), it has only ever granted refugee status to nine Africans.

As the numbers of asylum seekers have grown, so tensions have heated up in South Tel Aviv, where many Africans live side-by-side with Israelis. In 2013, the Israeli government passed a law that deemed the Africans “infiltrators” and allowed them to be imprisoned in a desert detention facility, where they were first kept indefinitely, then for a 20-month maximum, and now for up to a year at a time.

It has also attempted to send asylum seekers to African countries that are not their homes, including Rwanda and Uganda. Some who were shipped back have reportedly been pressured to leave those countries, and fled to Europe. A few were killed by so-called Islamic State or drowned in the Mediterranean.

The asylum seekers have their supporters inside Israel. It’s not lost on some Israelis that many of the country’s first citizens were survivors of genocide in World War II. Of course, the creation of Israel also kicked off the Palestinians’ own refugee crisis – and politicians often refer to the “demographic threat” the Palestinians, both citizens of Israel and those in the occupied territories, pose to the country that defines itself as a Jewish state. Like the Palestinians, many of the African asylum seekers are Muslim.

Recently, Israel said it would grant 200 people from Darfur a status that would allow them to work and give them other rights. But it’s not clear how these people were selected out of the approximately 8,000 people who fled Sudan for Israel.

The years of limbo have taken their toll on Anwar. The political activist has had short-term visas, spent time in detention, and pleaded his case in court. He’s made friends in Israel, even speaks the language, but still hasn’t found stability or the protections the word refugee is supposed to afford