SOROTI – After neighbouring Kenya became a breeding ground for Desert Locust, the government of Uganda through the Ministry of Agriculture, Animal Industry and Fisheries – MAAIF is not taking any chances for any threats that comes with the situation.

Agriculture Minister Vincent Bamulanzeki Ssempijja revealed on Friday at Soroti Flying School, where he presided over a function to receive assortment of items from FAO – Uganda that the destructive insects could cause a second cycle of invasion onto the country.

“We have to be more than prepared to avert any attack from these pests…The only challenge is that many Ugandans – including religious leaders believe that there are no locusts (around.) That’s how they nicknamed me ‘Nzige’ and caused a political scene,” said Ssempijja in relation to his recent failure to secure another term of office as Member of Parliament -MP.

He insisted that in 2020, the Desert Locust invaded 26 districts in the regions of Teso, Karamoja and Elgon but were ‘defeated’ because of the timely involvement of the UPDF – who applied all technics through the air and ground spraying systems.

“Now, four counties in Kenya are breeding areas – meaning Uganda should be on high alert; we need a high level of preparedness -through surveillence, sensitization, capacity building and mapping; so our partners like FAO, Japan (Jica) have responded to offer more support,” he announced, pointing out that three pick-up trucks; 22 motorcycles were already part of items to had turned to receive. Besides the pick-ups and motorcycles, Uganda government partners, handedover Mobile Storage Units – MSUs; surveillance kits; personal protective equipment -PPE; Spray pumps; to support the desert locust control efforts, especially in the areas bordering Kenya; promising that the other pledges would be delivered before the end of March.

FAO representative in the country, Ambassador Antonio Querido revealed that Uganda was one of the 14 African countries with threats of Desert Locust invasions. He noted that the insects would greatly impact social and food security of the people in the areas of Lango and Karamoja. 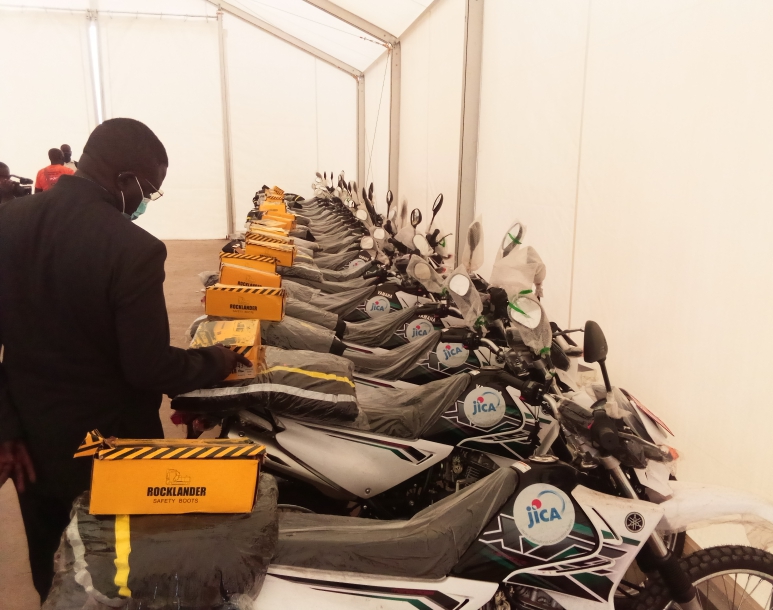 Evariste Magara – an expert on locusts’ control in Uganda, gave an overview of the effects of the swarms, saying the second cycle of attacks was likely to come into the country through the green belt of Mbale or Ssesse Islands – reasoning that insects in medium sizes had been reported in areas of Kenya’s Nakuru, Meru and Marsabit. He noted that unlike in the past when Tanzania was totally free of any attacks; whether conditions had led to invasions to the Southern East African country in January and February.