The construction was undertaken by CK Associates Limited at a cost of Shs2.3 billion and will host more than 1400 vendors who have for decades operated at Kasubi Junction.

The market located about a kilometer from Kasubi Junction has about 15 shelters for vendors’ stalls, a police post, a Children Centre , an office block, a perimeter wall and seven 500 liter water harvesting tanks among other facilities.

Charles Kironde, the technical director of CK Associates Limited, says they have achieved this with less disturbances except from rain that delayed works at some point.

He says that the project has a deficit liability period of one year within which they can repair any defects at the market at no extra cost.

Acting Executive Director of KCCA Andrew Kitaka said KCCA would engage the vendors for final works like installing stalls before they can move to the market. For now, there are shelters without proper stalls for vendors to vend their commodities. 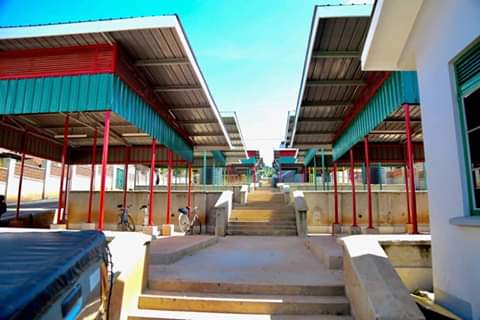 He said KCCA has concluded the process of registering vendors who wil be occupying the markets.

The chairman of the vendors Ronald Zibu said that they will follow a list compiled in 2014 and renewed in 2018 to allocate the stalls.